Donghae and Eunhyuk appeared as guests on the September 8 episode of the variety show. After performing part of their latest song “‘Bout You,” the two members sat down for a brief chat before beginning to solve the show’s quizzes.

MC Boom remarked, “[The cast members’ outfit concept] for today is airport fashion. Super Junior must always feel their popularity firsthand when they enter or exit the airport.” SHINee’s Key then brought up the fact that Super Junior was well-known for dressing up in entertaining costumes at the airport.

Eunhyuk explained, “Since our group doesn’t like being ordinary, we once all wore ‘Avengers’ costumes at the airport, and we’ve also dressed up individually as different movie characters.”

When asked where they put on the costumes and makeup, Donghae answered, “We get ready at the airport, after we get off the airplane.”

Eunhyuk then made everyone laugh when he said, “It’s fine when we come out and take photos in front of our fans, because it’s something we’ve prepared. But before that, it’s so embarrassing when we turn in our customs declaration forms.”

He added, “I was turning in my customs declaration form, and they kept staring at me. I was dressed up as Marilyn Monroe at the time.” 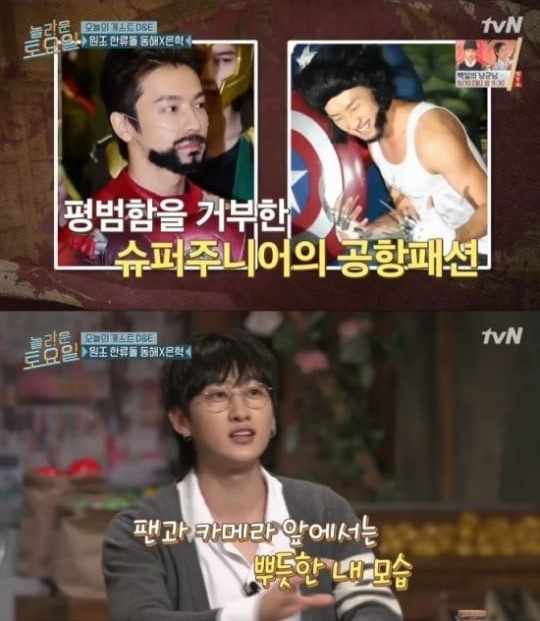