Super Junior‘s Choi Si Won expressed some of the group sentiments about Super Junior Leader Leeteuk‘s enlistment at the latest broadcast of MBC’s Section TV Celebrity Talk, “Once Leeteuk is back from his enlistment, we hope to take a world tour together. Although his absence won’t be as apparent to those on the outside, it will be felt largely by those of us behind-the-scenes.”

The big date for Leeteuk has been announced for October 30.

In a heartwarming manner, Choi Si Won assured viewers and fans alike that, “No matter how much we find ourselves running out of time, the members will always set aside time to keep seeing one another.”

Aside from speaking on Leeteuk’s leave, Choi Si Won also shared about moments where he felt foolish, “When my dance coach told me to practice what I had learned that day once more, I thought misunderstood that as him telling me to go and see Bae Young Jun. Because of this, the members tease me for making a fool out of myself.” 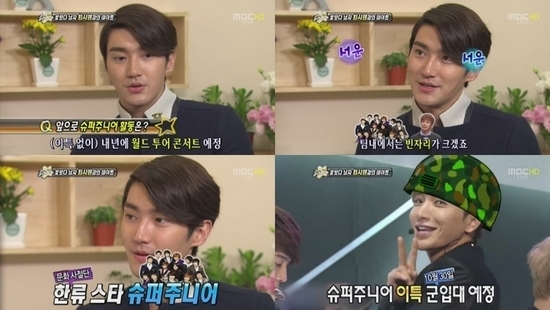