On April 8, she uploaded a screenshot of LABOUM’s new song “Fresh Adventure” on her personal Instagram. In the caption she wrote, “Good song.” 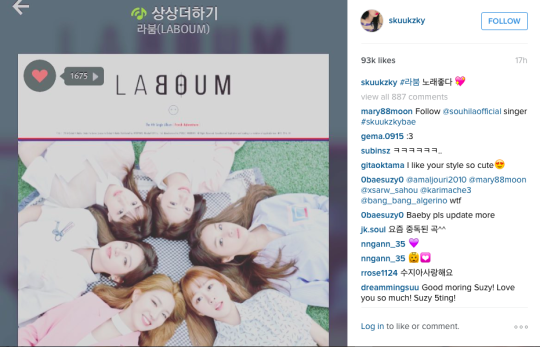 Suzy often encourages her labelmates GOT7 on her Instagram, but also recommends music she personally likes regardless of the agency. Last February she named The Black Skirts’ “Everything” and Flower Kim’s “Ocean” as part of her personal playlist.

A representative of LABOUM’s agency responded to the support, saying, “It’s a huge source of strength to have an amazing senior like Suzy support LABOUM. We are sincerely grateful.”

LABOUM debuted in 2014 with “Pit-A-Pat” and recently released their new album “Fresh Adventure” after holding a crowdfunding event. The music video for the title track dropped on April 6.