Taemin Discusses His Solo Concert, Gratitude For His Members, And SHINee’s Diverse Music

On December 11, SHINee’s Taemin made an appearance on SBS radio program “Kim Chang Ryul’s Old School,” where he talked about his concert, his members, and filming his music video.

Taemin shared his thoughts on concluding his solo concert, commenting, “When I was dreaming of becoming a singer, the first thing I wanted to accomplish was to hold a solo concert. I was able to do this [as a group] through SHINee, but I also wanted to do so as a solo [artist]. After I was able to accomplish this as well, I felt very grateful for fans who supported [me].”

He also expressed, “On the first night of the concert, I was nervous and felt pressured too. I was so nervous, but I had prepared well beforehand. I was able to finish the first day by controlling things like my breathing and strength, and was able to perform the second and third night more comfortably after that.”

The idol thanked his fellow SHINee members as well, and stated, “I don’t think I could have done a solo concert if it weren’t for my members. I thought about how I should become more of a help to SHINee.” Taemin was also asked if he knew that Jonghyun had danced to “Move” at his own respective concert, to which Taemin answered, “I went and saw the dance in person. Jonghyun parodied my dance in the midst of perform his own songs, just for me. I was thankful.” 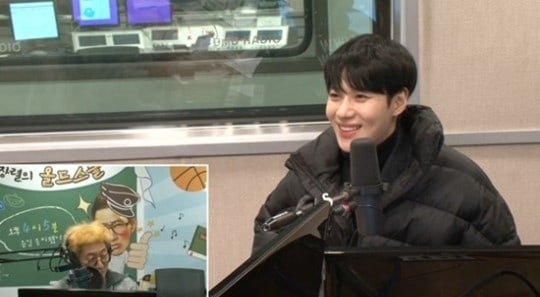 Taemin also stated, “I think we’ve tried a lot of various genres as SHINee. I think we’ve really tried most of the genres out there. My members, myself included, like to challenge ourselves with something new. I think we were able to grow through new experiences.” He added, “We attempted a lot of things by bringing in influences from retro or European styles and music, in order to stay ahead of the trend.”

The singer shared some behind-the-scenes stories from when he was filming his music video for his latest title track, “Day and Night.” Responding to a listener’s comment, Taemin revealed, “I had slept two hours before going to film on a hill in Jeju Island, and the air at dawn felt very refreshing. With previous music videos, it was difficult to film because we had to match our dance as a group. However, there was no group dance this time, so it was comfortable.” He laughed and joked, “Next time, I’m thinking of not including choreography.”