Idol fans of SHINee’s Taemin competed in a contest on “Idol Room”!

On the February 12 episode of the show, Taemin appeared as the main guest for his comeback this week with the mini album “WANT.” “Idol Room” invited four idols who have previously named Taemin as their role model to take part in a fun competition in the episode. They included NCT’s Jeno and Jisung, SF9’s Chani, and Kim Dong Han.

Jeno and Jisung were the first to appear, and Jeno impressed Taemin by saying that at his audition for SM Entertainment he’d danced to SHINee’s “Beautiful.” Jisung said that he’s liked SHINee since he was young, and the hosts playfully teased Jeno and Jisung over why they like Taemin more than the other members of SHINee. 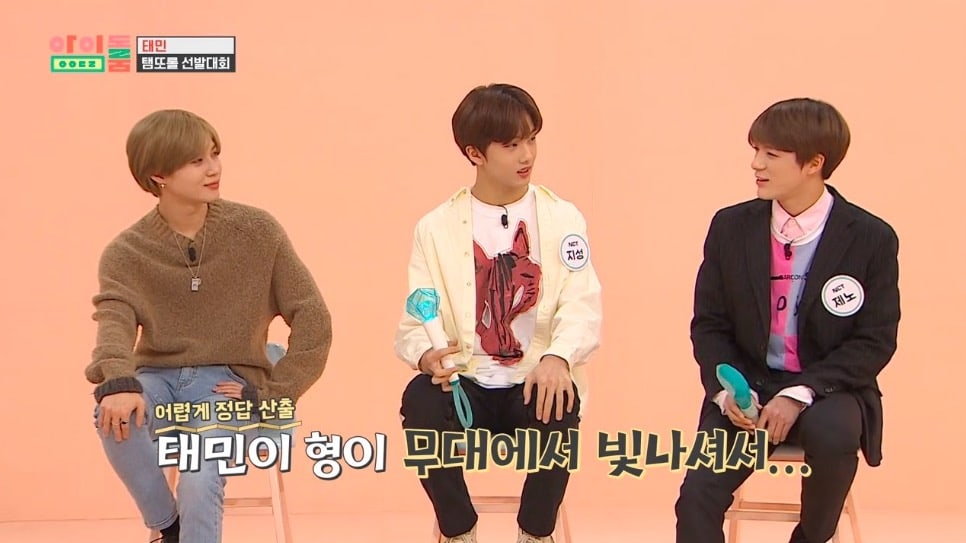 Kim Dong Han then joined them on set, and he described Taemin as the reason he was able to make his solo debut. “When I was in JBJ, I did a cover of Taemin’s ‘Move’ at our concert, and the head of my agency saw it and said he thought I could be a solo artist,” he explained.

Kim Dong Han appeared nervous as he described this and didn’t look at Taemin. When they were asked if they’d met before, Taemin said, “Yes, our promotions overlapped before!” Kim Dong Han was shocked and said, “You knew that?!”

The hosts laughed at his reaction before Taemin pointed out that it had actually happened twice, and the fact that Taemin remembered that made Kim Dong Han look like he was on top of the world. 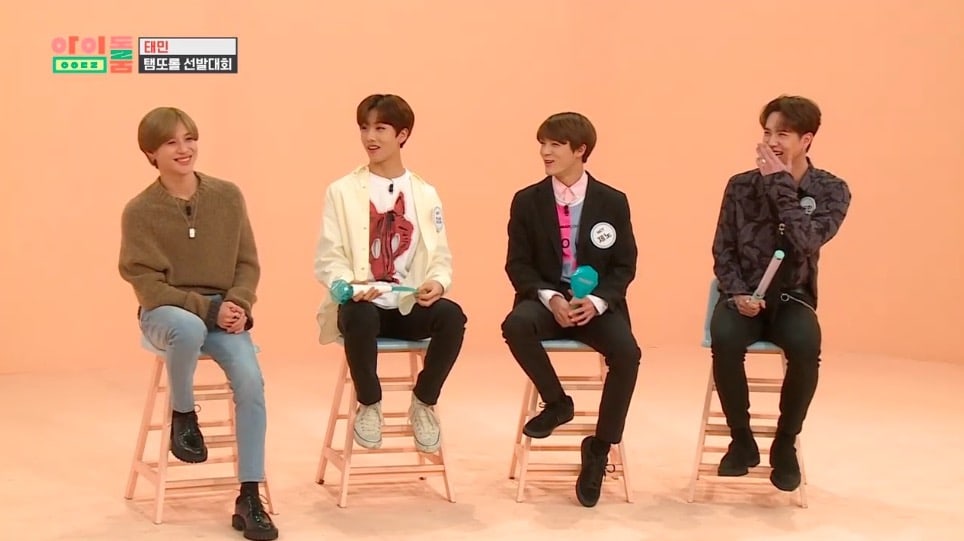 They then tested Taemin’s fans by asking what his blood type is. Jeno guessed A, while Jisung and Kim Dong Han both thought it was O. Taemin laughed as he revealed, “It’s actually B.”

Jung Hyung Don explained that they’d be joined by another idol fan later, as Chani was on the way to the studio after filming SF9’s upcoming comeback MV.

Before they began the competition, Taemin showed them one of the prizes: a t-shirt that he had worn on stage while performing “Good Evening” with SHINee. The three fans were also excited to find out that if they won the context, they’d get to exchange phone numbers with Taemin.

The hosts then explained that they had an unusual event up first for the contest. They’d prepared some of Taemin’s favorite foods, and the game was that Taemin would eat them and express the taste through a dance. His fans would then have to guess what the food was just from seeing his dance.

For the game, Taemin danced to express the taste of pigs’ feet, strawberry milk, and fried chicken. Jeno, Jisung, and Kim Dong Han each guessed one right. Jisung ended up with the highest points because he was able to guess the last item was fried chicken, which was inexplicably worth millions more in points. 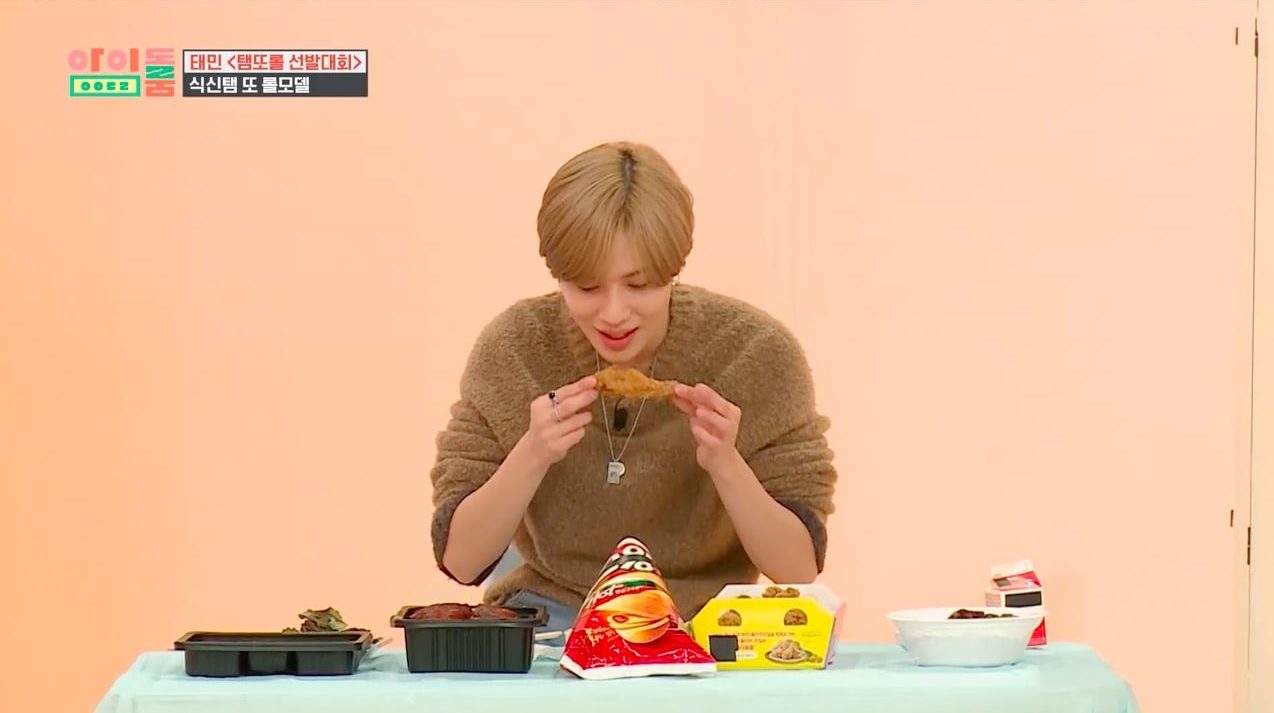 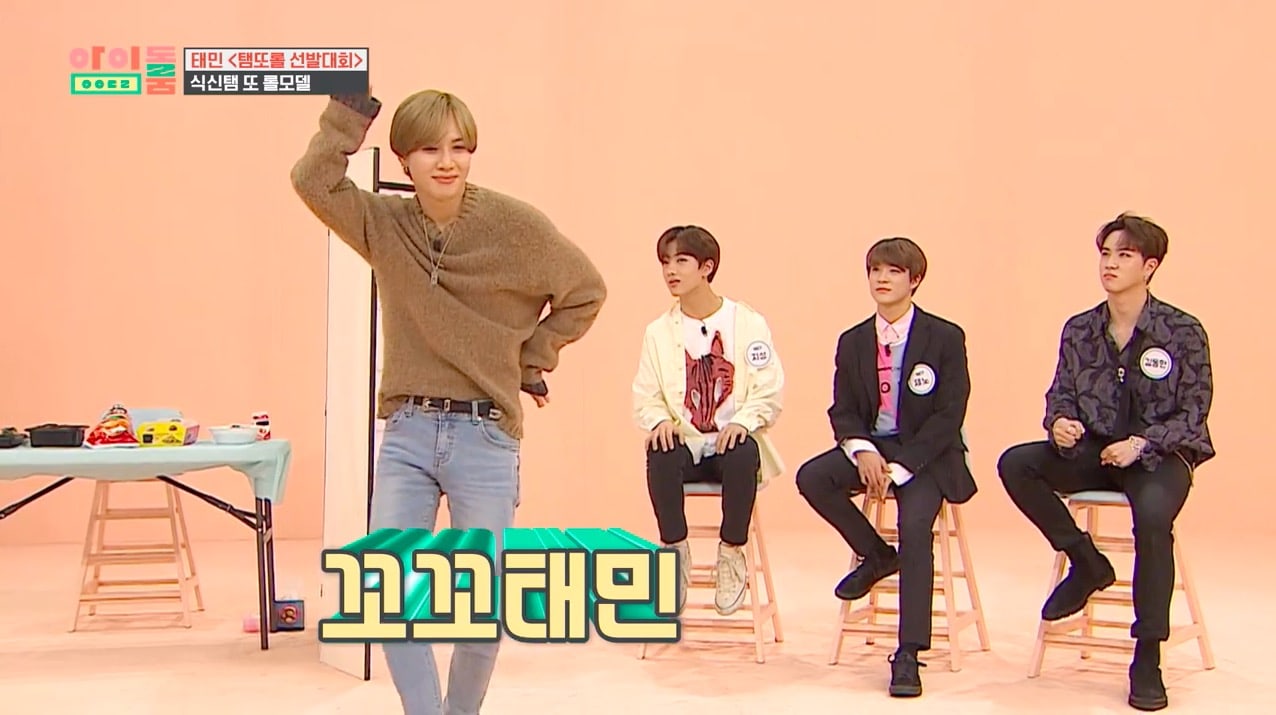 Chani then arrived to join in the second event, and the others were surprised to learn that he’d come straight from MV filming. Chani said, “I wanted to see him so badly that I flew over here.” Nine years ago, Chani appeared on a variety show because he looked similar to Taemin, and Chani covered his face in embarrassment as the “Idol Room” staff showed everyone a clip of his appearance. 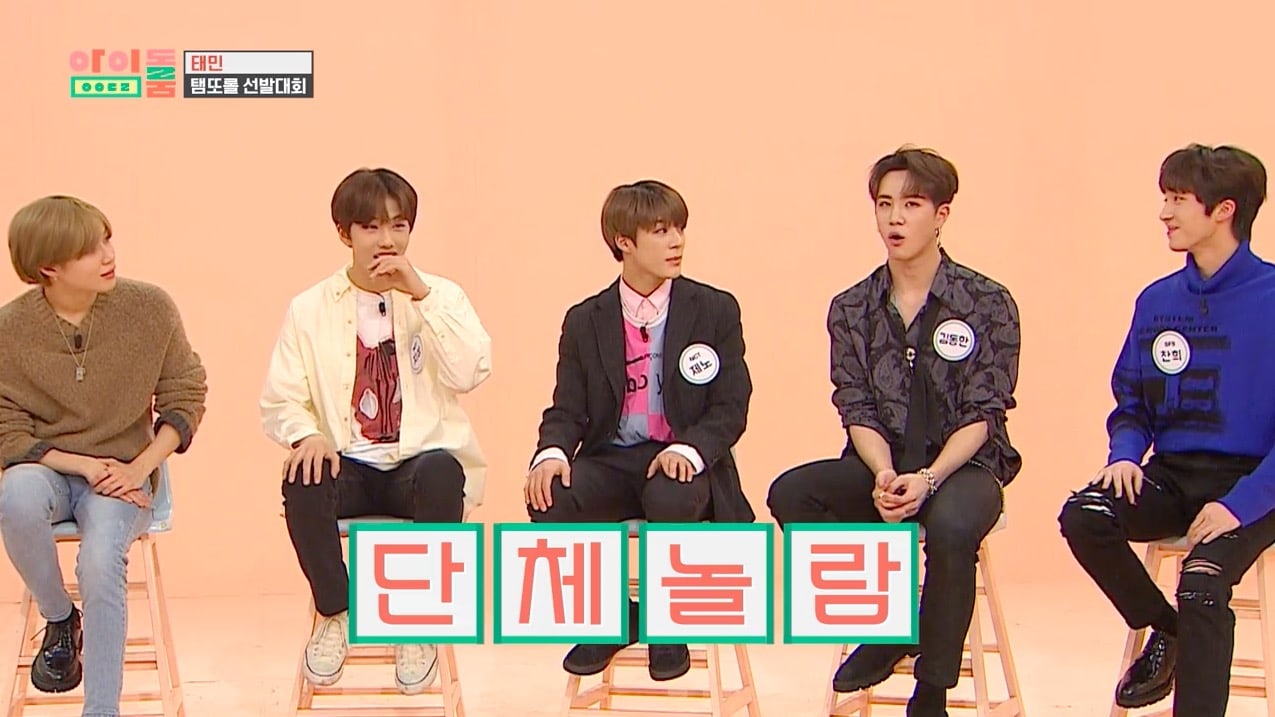 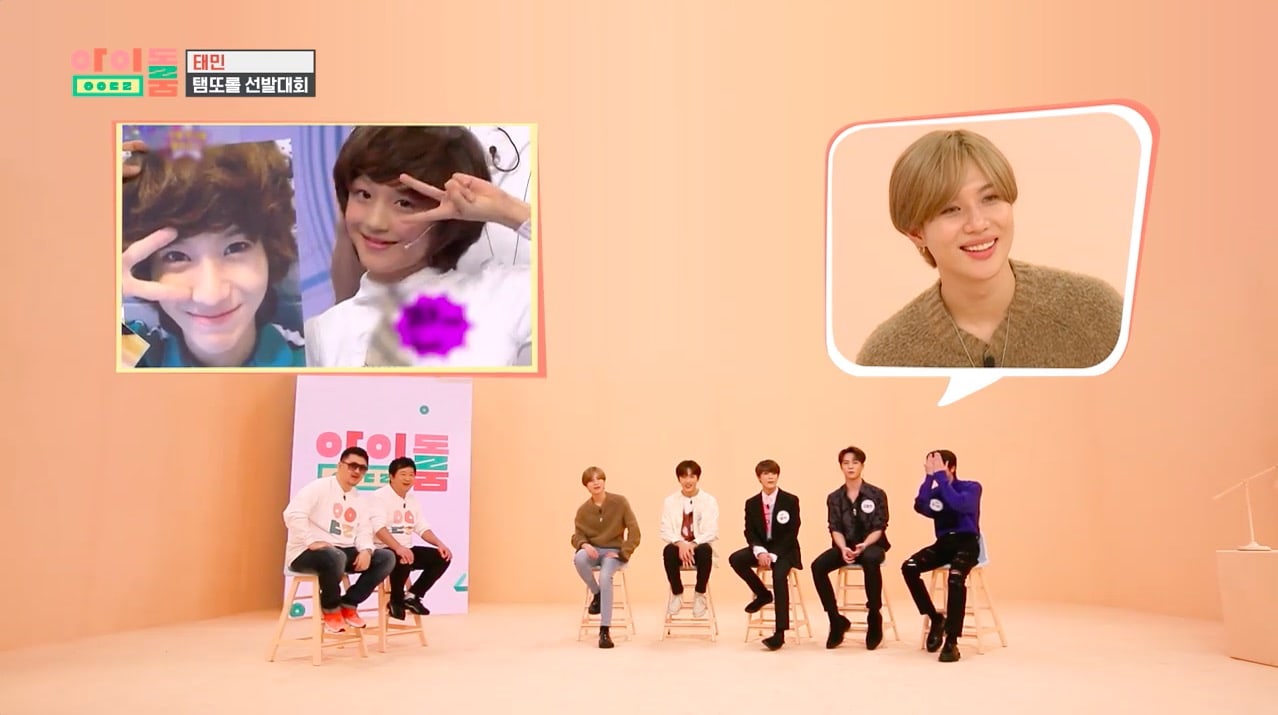 “I’ve liked Taemin since I was in fourth grade,” said Chani. “He was the reason I began to dream of dancing.” He also surprised everyone when he knew that Taemin’s blood type is B, and also knew his birthday. Taemin was touched and said, “Thank you so much.”

For the second event, the four idols danced to songs by Taemin and SHINee, with the winner decided by Taemin. The guys tried performing the choreography for songs including “Press Your Number,” “Danger,” “Goodbye,” “Ring Ding Dong,” “Sherlock,” “Everybody,” “Good Evening,” and “Move.” In the end, Taemin chose Kim Dong Han as the winner and the pair danced to “Goodbye” together.

In the final event, Taemin played a drawing game with his fans where they had to guess what he was sketching. The twist was that, as Taemin described, his way of drawing tends to be quite unique. Taemin first drew a face that left the four idols totally puzzled, until Chani figured out that it was Taemin himself. 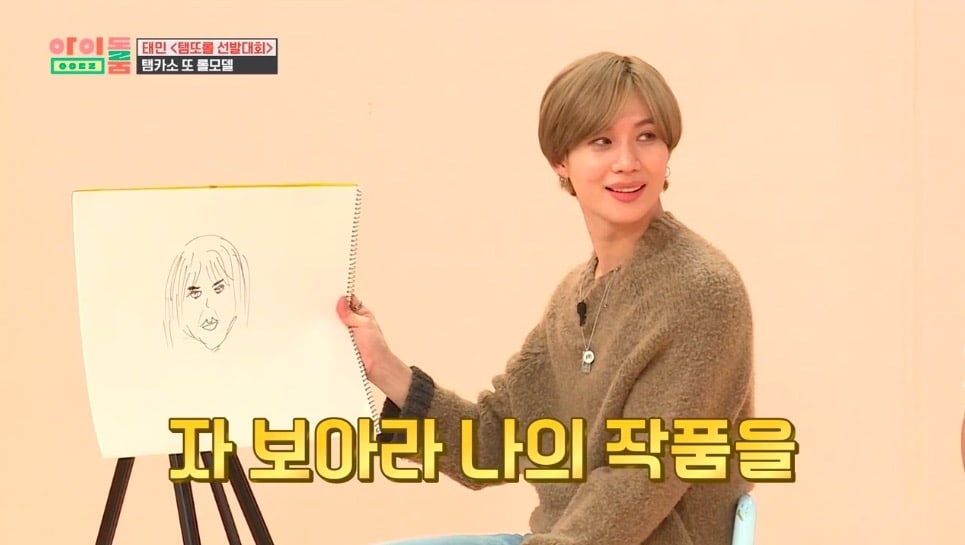 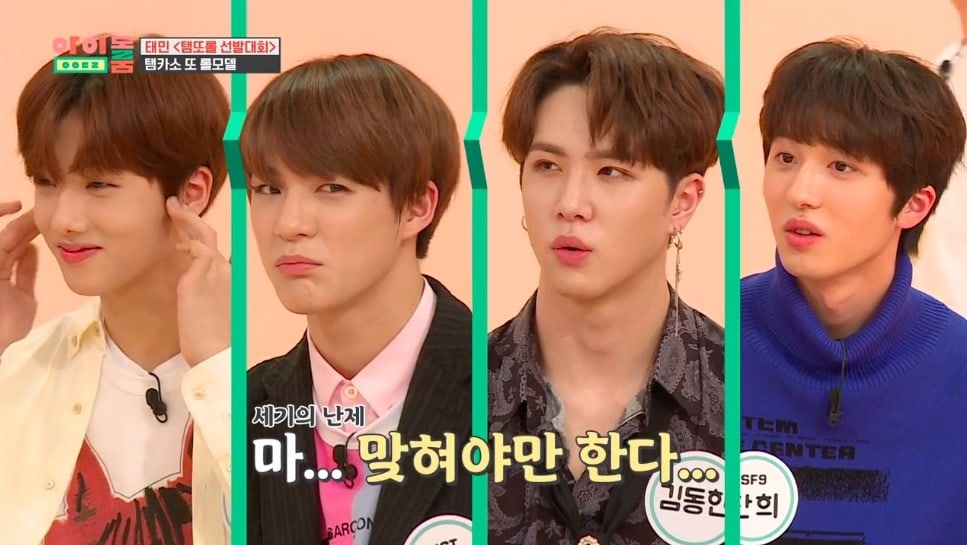 The second drawing also confused everyone, until Chani guessed again on his first try that it was Cinderella. 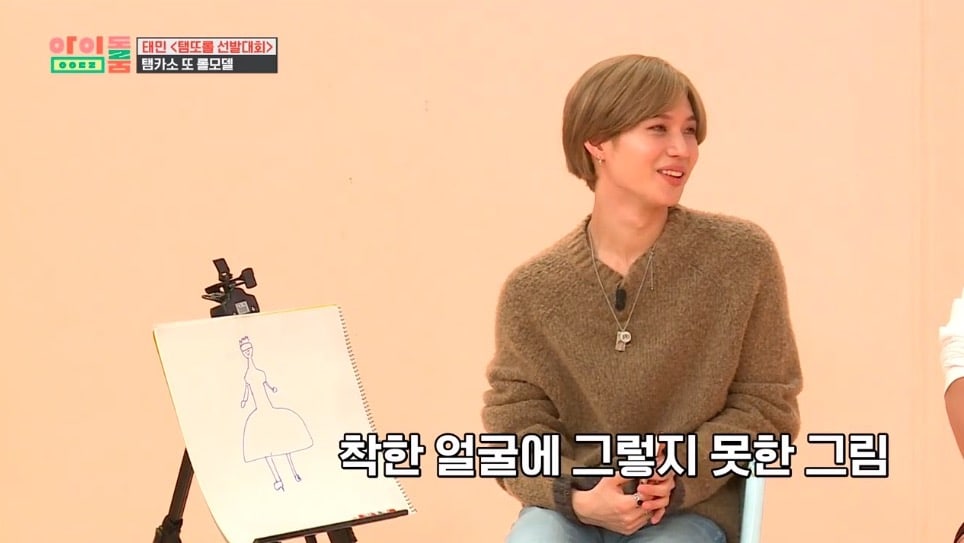 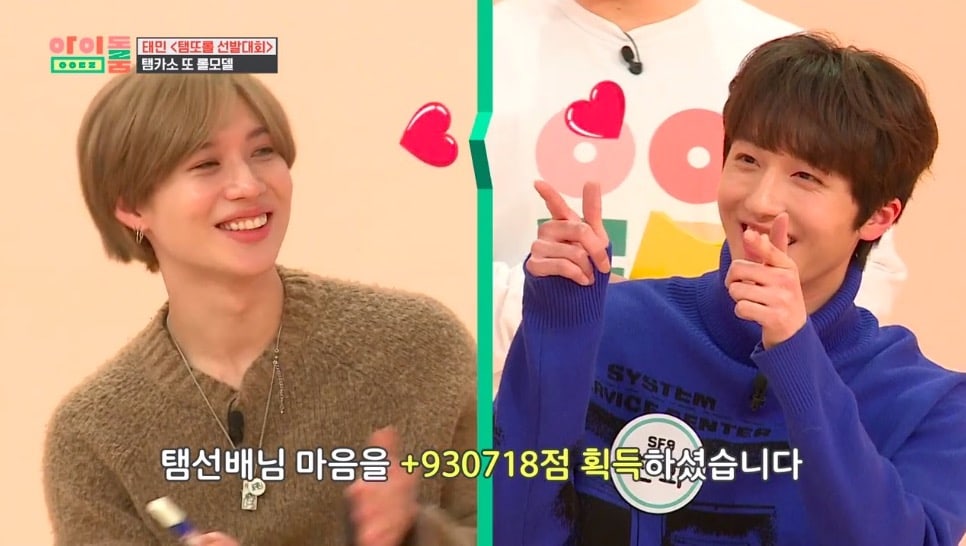 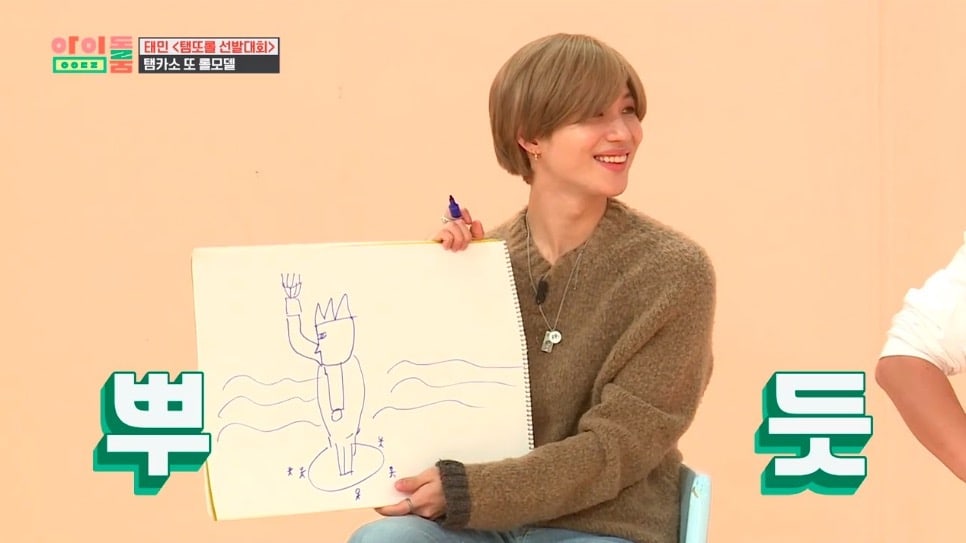 Since Chani had won the last game (which by “Idol Room” logic was worth many more points than any other event), he was crowned the winner. He received Taemin’s t-shirt and also got to exchange phone numbers with him. 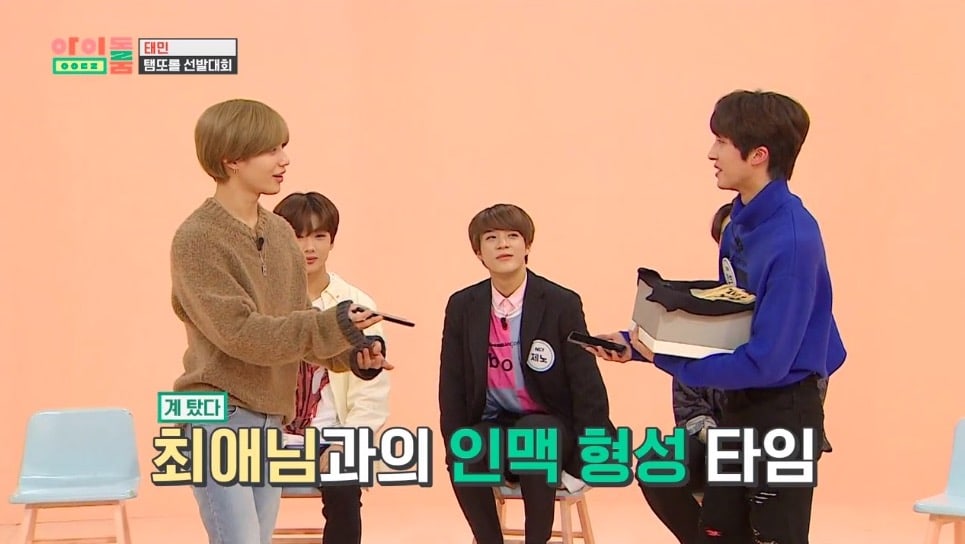 Jisung, Jeno, Kim Dong Han, and Chani all expressed their support and love for Taemin, and Taemin said to them, “Thank you for taking the time to do this. Because of the great things you’ve said, I feel a sense of duty and I know I should work hard.”