Teen Top guested on the May 9 broadcast of KBS Cool FM’s “Lee Hong Ki’s Kiss the Radio,” where they shared behind-the-scene stories from their recent comeback with “Seoul Night.” The broadcast also featured ASTRO’s Cha Eun Woo as the special DJ as Lee Hong Ki could not be there.

Regarding their title track “Seoul Night,” Teen Top said they worked with Brave Brothers again to maintain their unique musical color. Ricky commented, “The first time I listened to the guide version of ‘Seoul Night,’ it felt strange. But the more I listened to it, the melody had a strong addictive power, so it was chosen as our title track.” The members also shared that “Let’s Play!” was written and produced by Changjo, and that they performed it first in front of fans at their fan meeting.

Additionally, Teen Top revealed that “S.O.S” had also been a final candidate for their title track. Chunji explained, “It’s a song about falling hard for a girl you like and thinking, ‘I’m in big trouble.’ It was originally our title track, but there were some parts we weren’t completely satisfied with, so we decided on ‘Seoul Night’ as the final choice.” He continued, “However, it’s a high-quality song, so I ask that a lot of people listen to it.” 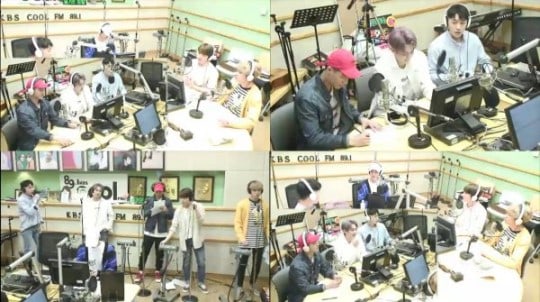 During the broadcast, Cha Eun Woo asked Teen Top what they like to do in their free time, to which Niel answered, “I really like games, and I’ve even spent eight hours at an internet cafe once playing games.”

The members were also asked if they had ever fought with one another. Niel remarked, “We fought a lot at the beginning of our debut, since we were all so young. One time we physically fought and I hurt my lip, so the camera director had to give me a special microphone that was reserved for only staff members. I used a lollipop that was prepared as a stage prop to cover my lips, and managed to finish the recording.”

The members then revealed how they’ve since changed, adding, “Because we debuted when we were so young, we’ve spent a lot of time together. While we fight often, we also make up very easily. When we were younger, we thought of each other cutely.”

Teen Top made their comeback with their new album “Seoul Night” on May 8, featuring a title track of the same name. With a powerful melody, “Seoul Night” showcases the fun and bright mood of a night in Seoul.