In a previous live broadcast, some of THE BOYZ members found themselves involved in an accusation, mainly driven by the group’s Korean fans who insisted that New “mistreated” Ju Haknyeon.

Hours after the broadcast, and the clip of New asking Ju Haknyeon to leave the room began circulating online, the two members hosted another live broadcast to better explain the situation and clear up any misunderstandings. In the broadcast titled, “????????,” Ju Haknyeon claimed that the fans’ reaction about his departure from the room is rather unexpected.

New: We were shooting something, but…
Ju Haknyeon: We’re still shooting but we’re on break right now, so we decided to go live.
New: And we’re a little…
Ju Haknyeon: Yeah, like I’m not sure how exactly I should explain this.
New: To be honest, we weren’t sure if we should tell everyone everything, but it seems we should. It’s not like there’s anything to hide either. So… tell us, Haknyeon. Or should I?

Lightheartedly, Ju Haknyeon said that he found the “controversy” to be a good thing because it showed how THE BOYZ have gained more popularity. Staying humorous, though flustered, Ju Haknyeon explained how he found out about the misunderstanding… 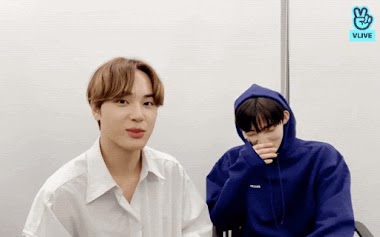 Ju Haknyeon: I’ll explain… although I don’t know how. I find it funny, actually. But… uh, I guess we’re more popular than we thought?! Which I like… I love that for us. Anyway, to explain what happened… Earlier today, we went live—
New: Yesterday, you mean.
Ju Haknyeon: Oh right, since it’s past midnight now. Yeah, so yesterday, a couple of hours after that live broadcast, I went online. And I searched my name, like I sometimes do… And I found out there’s a lot of talk going on about me. A lot of funny talk…

… and why it must have began going around.

Ju Haknyeon: So Sunwoo, Younghoon, and Q started broadcasting first.
New: And we were watching it on our phones in the car.
Ju Hakyneon: I asked if we should like to go inside to participate, which we did.
New: So we went inside wanting to be a part of the live.
Ju Haknyeon: Right, and I took a seat in the back while the rest of them remained closer to the camera. And that’s when we received a text message. It was about how we should still be careful, since we’re still battling a pandemic. And it’s still against the rules to have more than five people gather. And we were in a smaller room, so it could spark worry…
New: Yeah, it basically said it might be best not to leave any room for misunderstandings about us breaking any rules when we aren’t. Just to clarify though, we’re not “gathering” or anything. We’re actually in the middle of a schedule right now… So that’s why we’re all here together.

Ju Haknyeon clarified that New asking him to leave the broadcast is not mistreatment of any sort — and that he was not offended by it.

New: Anyway, Haknyeon did not see that text message because he was sitting in the back. Only the rest of us closer to the phone saw the message.
Ju Haknyeon: The message was sent in a group chat with everyone in it. So the notification popped up for everyone. Anyway … Since there are 11 of us, we take turns getting our hair and make-up done. I’m not sure how much I can disclose, but…
New: I find it really funny that we’re here explaining this. I feel kind of embarrassed? I don’t know… But anyway.
Ju Haknyeon: Anyway, it was my turn to go. I didn’t know though. So that’s why when New said I should go back to my room, I said, “Why? Do you want to get rid of me?”
New: And I know what I did next caused a huge misunderstanding as well… but because he didn’t see the message [about the five people rule], I took my phone out and showed him the message.
Ju Haknyeon: And after realizing it’s my turn and seeing the message, I got up and left! That’s all.

New also made it clear that he initially claimed that Ju Haknyeon has left the room “to go sleep in his room” because he didn’t know how much about the schedule he could disclose to the fans. 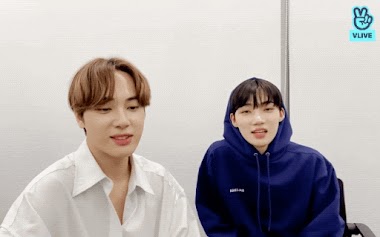 I know I said he’s going away to sleep, but he was actually leaving to carry out his part of the schedule. I said he’s going to sleep though because I wasn’t sure how much about this schedule I could disclose — since it’s not a part of the official schedule [that is shared with the fans] and we have no idea when this video [that was being filmed at the time] will be released.

Both Ju Haknyeon and New agreed on going live for this follow-up broadcast because they decided it’s better to explain rather than letting it go unexplained.

Ju Haknyeon: I’m the type of person who has to work out any misunderstandings right away… So I said we should go live and tell everyone what happened, even if it feels funny that we have to explain such things. And, more importantly, while our fans have learned a lot about our personalities and stuff in the past three years…
New: They know us better than we know ourselves.
Ju Haknyeon: Right. And I know they wouldn’t believe these online accusations anyway. But in the case they came across all the talk and started worrying about us… I wanted to make it clear that it’s nothing. We didn’t even think it would turn into a misunderstanding.

THE BOYZ wrapped up the broadcast assuring the fans that there is nothing to be worried about!

Just know that we actually had a great day today … and now we’re going to go keep doing what we’re here to do. And hopefully, the next time we go live, it’s for something better than explaining misunderstandings. We’ll try harder to make sure we don’t make the fans worry in any way.