On February 20, BTS announced their world tour “Love Yourself: Speak Yourself,” featuring concerts in six stadiums around the world.

The lineup of shows includes impressive world-renowned stadiums such as the Rose Bowl Stadium in Los Angeles, Soldier Field in Chicago, Metlife Stadium in New Jersey, Allianz Parque in Sao Paulo, Wembley Stadium in London, and the Stade de France in Paris.

Along with photos of Korean soccer player Son Heung Min and Wembley stadium, Tottenham wrote, “Welcome to Wembley, BTS! This is Wembley, where Son Heung Min always scores great goals and shouts for joy! On June 1, another Korean star BTS will be visiting the stadium for their concert!” 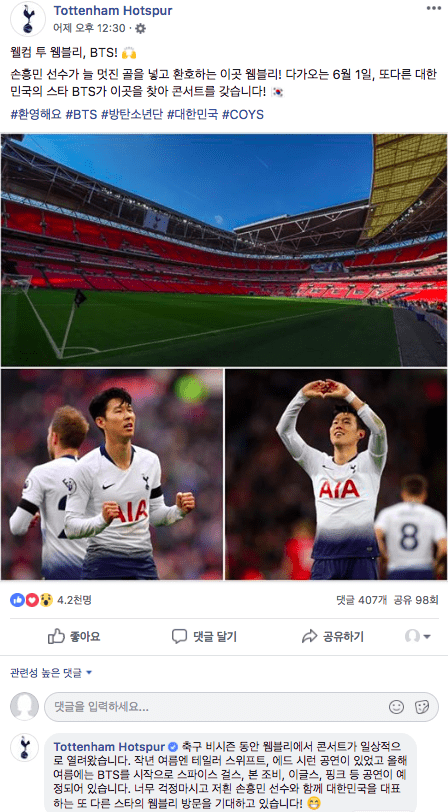 In the comment section, the football club also responded to some comments that expressed concern about the concert having an effect on the stadium.

Tottenham reassured by saying, “When soccer is not in season, Wembley has always held concerts. Taylor Swift and Ed Sheeran held their concerts last summer, and starting with BTS, Spice Girls, Bon Jovi, Eagles, and Pink will also host their concerts this summer.”

They concluded, “Please do not worry too much. We are always looking forward to a visit from another star that represents Korea with Son Heung Min!”