TWICE‘s new comeback track “I Can’t Stop Me” is one of the group’s most exhilarating yet, but putting the perfect performance together wasn’t easy. In fact, Mina practiced so hard that she began bleeding.

In a new interview with Seventeen, TWICE divulged some of their most memorable behind-the-scenes moments from the “I Can’t Stop Me” music video shoot. The group’s latest MV sees the members alternative between fantastical backdrops and energetic, retro-style choreography.

Sana’s favorite memories from the shoot were happy ones. The TWICE star told fans the members played a rousing game of mafia in their downtime, which inspired them to try playing popular game Among Us with fans. She also overheard a precious compliment from the crew, who said the stars looked like fairies inside a flower in one scene. Mina, however, had a more shocking behind-the-scenes story to share.

After watching the “I Can’t Stop Me” music video, ONCEs were filled with praise for how the members executed such a taxing dance so effortlessly. The members recently told fans that they only had a few days to learn the choreography, filming the music video shortly after—which meant everyone had to work harder than usual.

In the interview, Mina revealed she was working particularly hard to “give the best video to [TWICE’s] fans“. In fact, she was dancing so hard during the choreography scenes that her knees began bleeding. The craziest part is that Mina was so focused, she didn’t even realize she cut her knee at first.

Referring to the injury as a “wound of glory or a battle wound“, Mina didn’t seem to fazed by the incident. However, it may have given ONCEs a bit of a scare if they’d been on set that day. After all, Mina already suffered a more serious leg injury last year.

Back in January 2019, fans noticed Mina limping when she arrived at the airport one day. Months later, she was seen performing with therapeutic tape on her legs, used to treat injury-related pain. Many fans believe the stress of the injury later contributed to Mina’s months-long mental health hiatus. 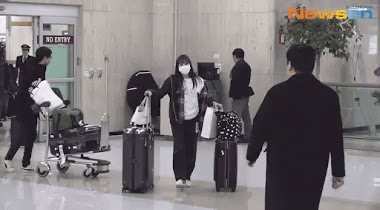 Thankfully, Mina seems to be doing well despite her on-set injury. TWICE is set to promote new album Eyes Wide Open as eight while Jeongyeon recovers from her anxiety disorder.