TWICE talked about their new standing at JYP Entertainment and their latest comeback during a radio show.

On April 19, TWICE appeared as guests on SBS PowerFM’s “Lee Guk Joo’s Young Street” and shared that they finally became a senior group at their agency after the debut of Stray Kids.

The group’s leader Jihyo said, “We’re still the second youngest at JYP, but I’m really happy to have juniors. We received CDs not too long ago and they wrote something to each member.” Nayeon added, “It’s really cool now that we have become seniors,” to which the other members agreed.

TWICE then took turns answering questions. When asked to choose the member with the most memorable first impression, Jihyo answered, “Momo and Sana.”

She explained, “Momo and Sana were the first Japanese people I’d ever met. I think they thought that I was definitely older than them. When I told them that we were the same age, they said, ‘Huh…?’” 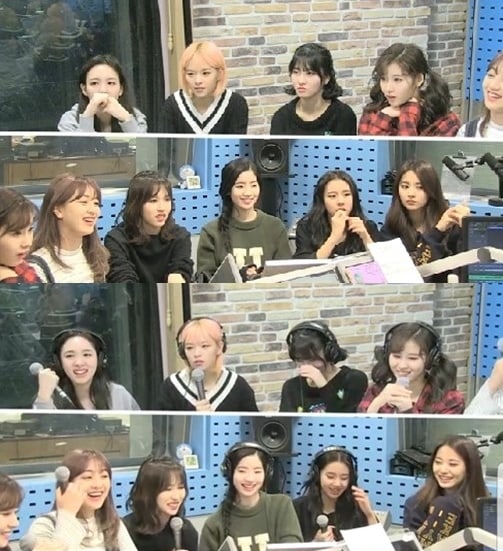 Dahyun was asked to choose the clumsiest member off-stage. She answered, “Definitely Nayeon. On stage, Nayeon’s performance skills are really good. But in real life, she does things like wear t-shirts inside out.”

Nayeon commented, “I’m clumsy on stage too. These days, I can’t find my position on stage and get the choreography wrong.” Jungyeon added, “Nayeon gets it wrong, but is good at confidently acting like she didn’t.”

When it was Momo’s turn, she had to choose the member more obsessed with food. She also chose Nayeon and explained, “She always travel with food and Nayeon also obsesses over food. When I’m eating something, she always comes next to me and asks, ‘What’s that?”

Chaeyoung had to answer which member she’d scold if she wasn’t the youngest. She chose Nayeon again, who responded with an embarrassed laugh.

TWICE then revealed that Dahyun was the most different on and off camera. Dahyun acknowledged this and said, “Fans also say that I’m like a middle-aged man.”