It seems like TWICE has already taken Japan by storm, despite the fact that they have not even had their official debut in Japan.

According to TWICE’s agency, JYP Entertainment, on April 28, “Japan’s NTV program ‘ZIP!’ held a survey amongst local female middle and high school students and, although TWICE hasn’t even debuted officially in Japan yet, 80 percent of them already knew about them.”

The program introduced TWICE as a “nine-member Korean girl group who plans to debut in Japan. They had a major debut in 2015 and, within just a year of their debut, topped the iTunes Charts in nine countries. They are a group appearing in over 20 commercials. The entire world has their eyes on them.” 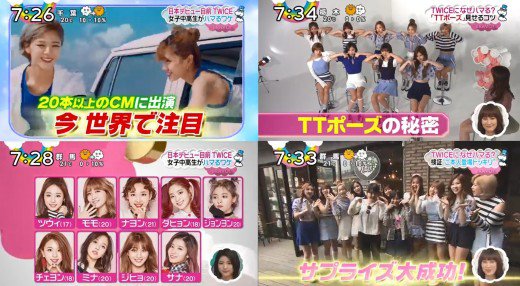 They listed off a few reasons why TWICE is such a popular group. They said, “The members are all very pretty and their ‘TT’ pose is so popular that it could even be called a social phenomenon. They also debuted through an audition program and have all been introduced through different media.”

Meanwhile, TWICE is set to debut in Japan on June 28 with their album “#TWICE” and will begin their promotions in Japan. They are also set to hold a debut showcase in Tokyo on July 2; however, Korean fans don’t have to worry too much because, before their debut in Japan, the group will release an album in Korea this May.