TWICE Talks About Their Hobbies, Dorm Habits, And JYP Entertainment’s Next Move

On April 13, girl group TWICE appeared as guests on Kim Shin Young’s MBC FM4U radio show to promote their new comeback with “What Is Love?”

During the show, Kim Shin Young brought up her “girl group” Celeb Five and Momo said, “I think it’s impressive that you were able to do such a difficult thing [referring to the choreography]. I think it would take us a lot longer to learn it.” The other members then chimed in to say that they were also interested in learning and Kim Shin Young jokingly suggested Celeb Five could perform at a TWICE concert when the girls had to go backstage to change clothes. 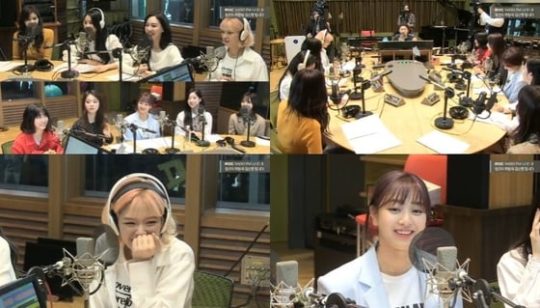 In talking about their latest hobbies, TWICE shared that they were watching the drama “Pretty Noona Who Buys Me Food.” Jungyeon shared, “I saw a photo of Jung Hae In and my heart fluttered.” They also revealed that they watch the dating variety show “Heart Signal” while eating meals at the dorm.

Then the girls began to dish on each other’s dorm habits, picking Jungyeon as the member who did much of the chores and Sana (among many) as the one they wished would do more. Jungyeon said, “There’s so much luggage in the dorm. She hasn’t unpacked her suitcases yet.” Sana replied, “I have opened the suitcase but haven’t put everything away yet. We’re going to Japan again quite soon anyway.”

TWICE then picked Jihyo as the member who cried the most, with Momo being the one who cried the least. Jihyo said, “I’ve never seen Momo cry. She seems like she would cry easily, but she doesn’t cry when watching sad movies or anything. I think Tzuyu cries the most. There are times when it comes out of nowhere.” Nayeon also picked Jihyo as the member most likely to succeed in society, sharing, “We went to a company dinner and the employees said that if she worked at a company she would get a lot of love from her superiors and be able to move up fast.” However, Jihyo said, “That’s the first time I’ve heard that.”

When Kim Shin Young joked that TWICE’s financial success should lead to a new building for JYP Entertainment, TWICE shared that the company is indeed planning to move buildings, including the establishment of an organic restaurant in the building. (Park Jin Young is known for his love of organic products.) Kim Shin Young said in surprise, “He has always said that he wanted to have a restaurant in his building and it’s finally coming true.”