TWICE has once again shown their popularity with their new song!

On December 11, TWICE released their repackaged album “Merry & Happy,” featuring the title track “Heart Shaker,” which was a big hit right away. As of 10:30 p.m. KST, “Heart Shaker” has taken the No.1 spot on the realtime charts of all six major Korean music sites including Melon, Mnet, Bugs, Soribada, Genie, and Naver.

With this success, “Heart Shaker” has become yet another hit track by TWICE, following in the footsteps of songs including “Cheer Up,” “TT,” “Knock Knock,” “Signal,” and most recently “Likey.” 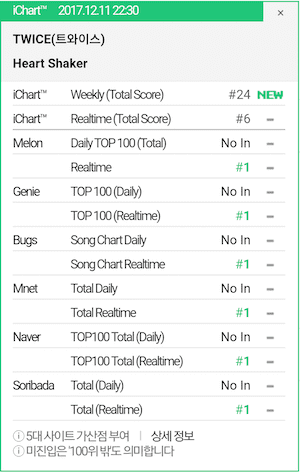 “Heart Shaker” is a song about bravely walking up to your crush and winning his heart. TWICE celebrated their comeback on December 11 with fans through a showcase that was broadcast on V Live.

Congratulations to TWICE on their impressive achievement!