TXT’s Appearances In ITZY’s Vlog Has Everyone Cracking Up

Between debuting the same year and earning the title “Monster Rookies,” TXT and ITZY are two groups that fans love to see be friendly with each other. In one of ITZY’s ITZY? ITZY! vlogs, TXT made a memorable appearance that had many fans laughing.

Going behind the scenes of their 2019 V Heartbeat Awards appearance, every member of ITZY took turns thanking fans for winning their rookie award. When it was Lia‘s turn, she wasn’t the only one thanking fans. 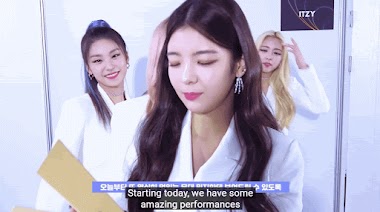 That wasn’t the end of TXT’s appearance in the vlog. After ITZY boarded a plane to fly to their next awards show, eagle-eyed fans spotted a familiar face among the passengers who were blurred out.

With blue hair that stood out, fans couldn’t miss Yeonjun sitting a few rows behind Yuna and Ryujin.

Funnily enough, fans pointed out it wasn’t the first time ITZY and TXT ended up in each other’s vlogs.

No matter what, the two groups are always bringing fans laughter. Check out the funny moments here.