The idol group set a new record earlier this year with its Japanese debut, when its single album “ID” achieved the highest sales of any K-pop debut in Japan. UP10TION managed to sell over 167,000 copies of the album in just one day, breaking the record set by EXO in 2015.

The single, which was certified gold by the Recording Industry Association of Japan in March, debuted at the top of several Japanese music charts. Immediately after releasing “ID,” UP10TION hit No. 1 on both Billboard Japan’s and Tower Records’ daily charts, and the group also managed to reach No. 3 on the Oricon chart, trailing popular Japanese artists Sandaime J Soul Brothers and Morning Musume.

On December 4, Japan’s leading music retailer Tower Records announced that the single had also taken first place on its “2017 K-Pop Single Album Chart.” UP10TION’s “ID” was the best-selling single of the year at No. 1, followed by BTS’s “Blood, Sweat, Tears” at No. 2.

SNUPER claimed No. 3 on the list, while TWICE and GOT7 took No. 5 and No. 7 respectively. BTOB and MONSTA X both managed to snag two spots each in the top 10, with Boyfriend rounding out the chart at No. 10. 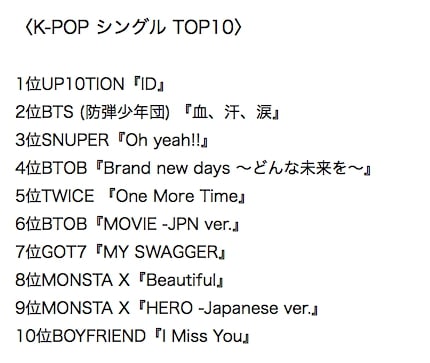 UP10TION will be releasing its second Japanese single album, “WILD LOVE,” on January 24. Starting January 15, the group will be traveling to various cities in Japan to perform and greet their Japanese fans in person.

Congratulations to UP10TION and all the other artists who made the top 10!

Check out the music video for UP10TION’s “ID” below!