Group VICTON has been under fire recently for posting a dance practice video on social media using a song that was dedicated to bringing justice for Breonna Taylor.

tw// breonna taylor
since y’all bullied that account into deleting it heres the video of victon dancing to the breonna taylor song since their dumbass fans think its more important to clear the searches than discuss where their faves fucked up pic.twitter.com/E8tQlPUHsv

This video was deleted just a few hours after it was posted due to VICTON’s fandom sending a mass amount of e-mails to the company explaining the situation. Although the video may have been posted due to not understanding the song, fans believed that this issue needed to be taken more seriously.

Below is the email template that was sent by international ALICEs to the company.

Hello this is international ALICE. There is currently a controversy over the video uploaded by VICTON’s Sejun on his Instagram on October 17, 2020. The music used in the video was created to raise awareness of the incidents that occurred in the U.S. due to racism against black people and atrocities by the police. (More details can be found in this article). Artists and agencies are fully aware that they used music without any malice, but the use of this music shows that there is no awareness of cultural and human rights issues.

As K-Pop’s consumerism has expanded beyond Korea and Asia to the U.S., I think that the agency should be more careful about cultural issues. We politely request PlayM Entertainment to make sure this problem never happens again. We ask that you delete his Instagram video and request that you not use this song in the future. We request that you raise awareness of cultural-human rights issues through education for the artists and staff and request that no controversial styling occurs in the planning process. As much as international ALICE appreciates your efforts as a company, we hope that you will be able to accept and reflect on our above requests. 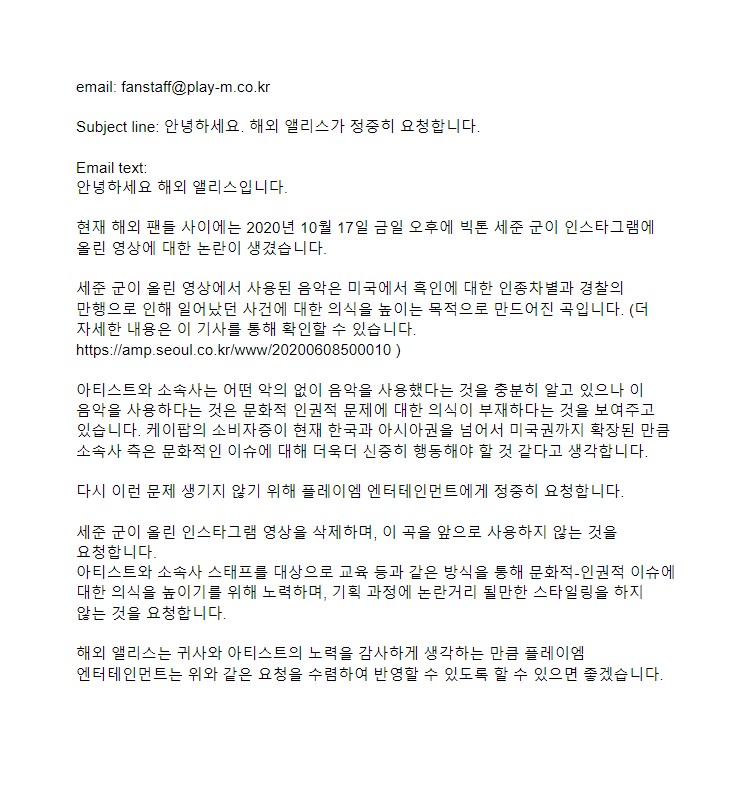 The song used in the video was called “I Need You To” by Tobe Nwigwe and is a song calling for the arrest of the police offers that killed Breonna Taylor and Elijah McClain.

After the video was deleted, member Sejun held a live stream and issued a public apology to the fans. However, fans didn’t feel that his apology was sincere due to his casual manner.

(Video edit and Subs by me) pic.twitter.com/XOhkhctcou

Most recently, members Sejun, Subin, and Seungsik have all posted personal apologies on their Instagram accounts.

Hello this is VICTON’s Seungsik. First of all, I apologize for greeting everyone with not so good news. The song we used in our recent dance practice video hurt many people. We posted the video quickly without fully understanding the contents of the song. 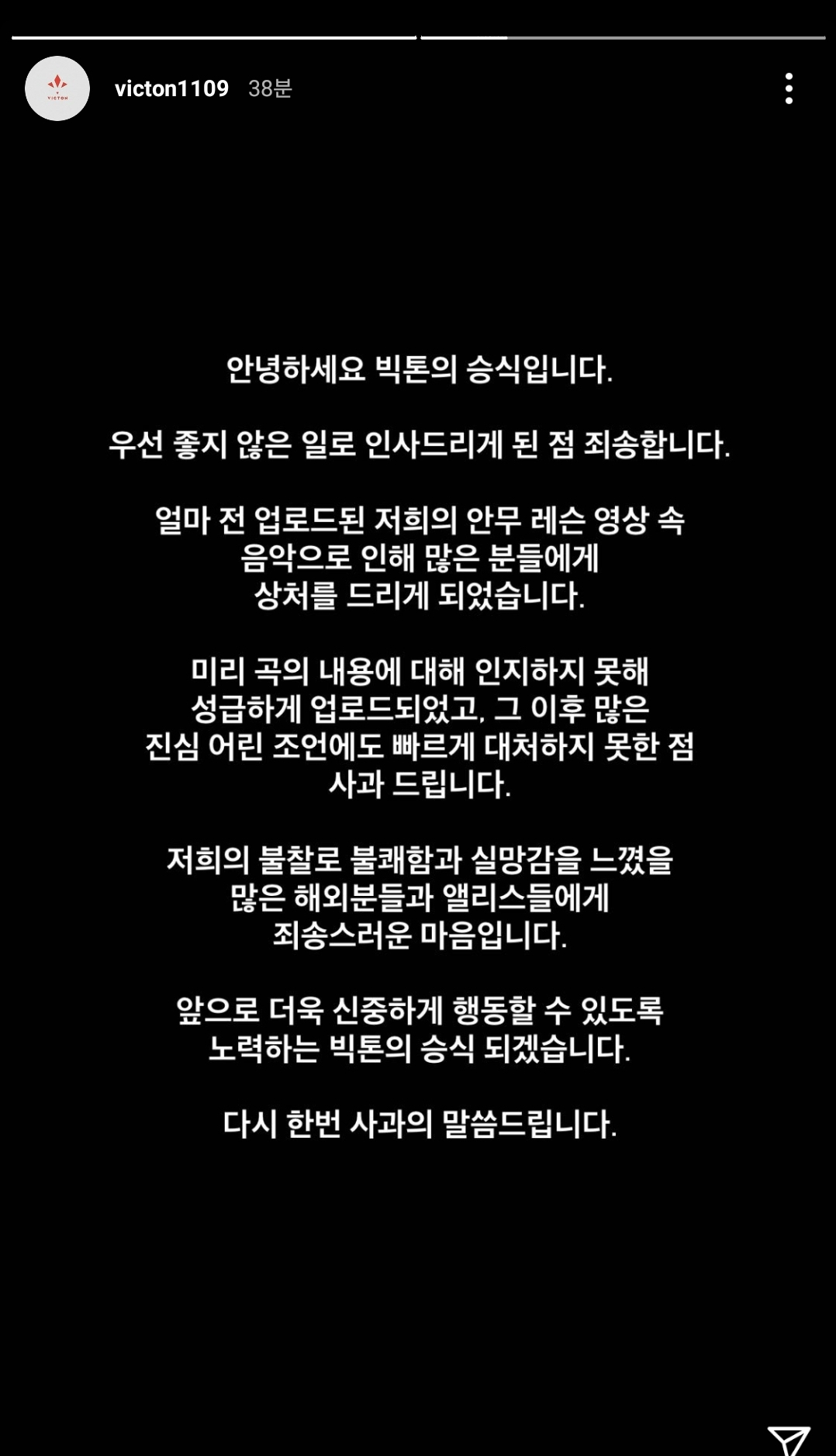 I apologize for not acting sooner even though I received a lot of genuine advice and concern. I am truly sorry for disappointing our international ALICE through our mistake. Going forward, I will work hard to be more cautious of my actions. I apologize once again for this matter.

Hello this is VICTON’s Subin. First off, I apologize for coming here due to an unpleasant matter. During our break, Seungsik, Sejun and I were taking dance lessons and started to record our sessions for monitoring purposes. While doing that, we posted a dance practice video that hurt many people who watched it. 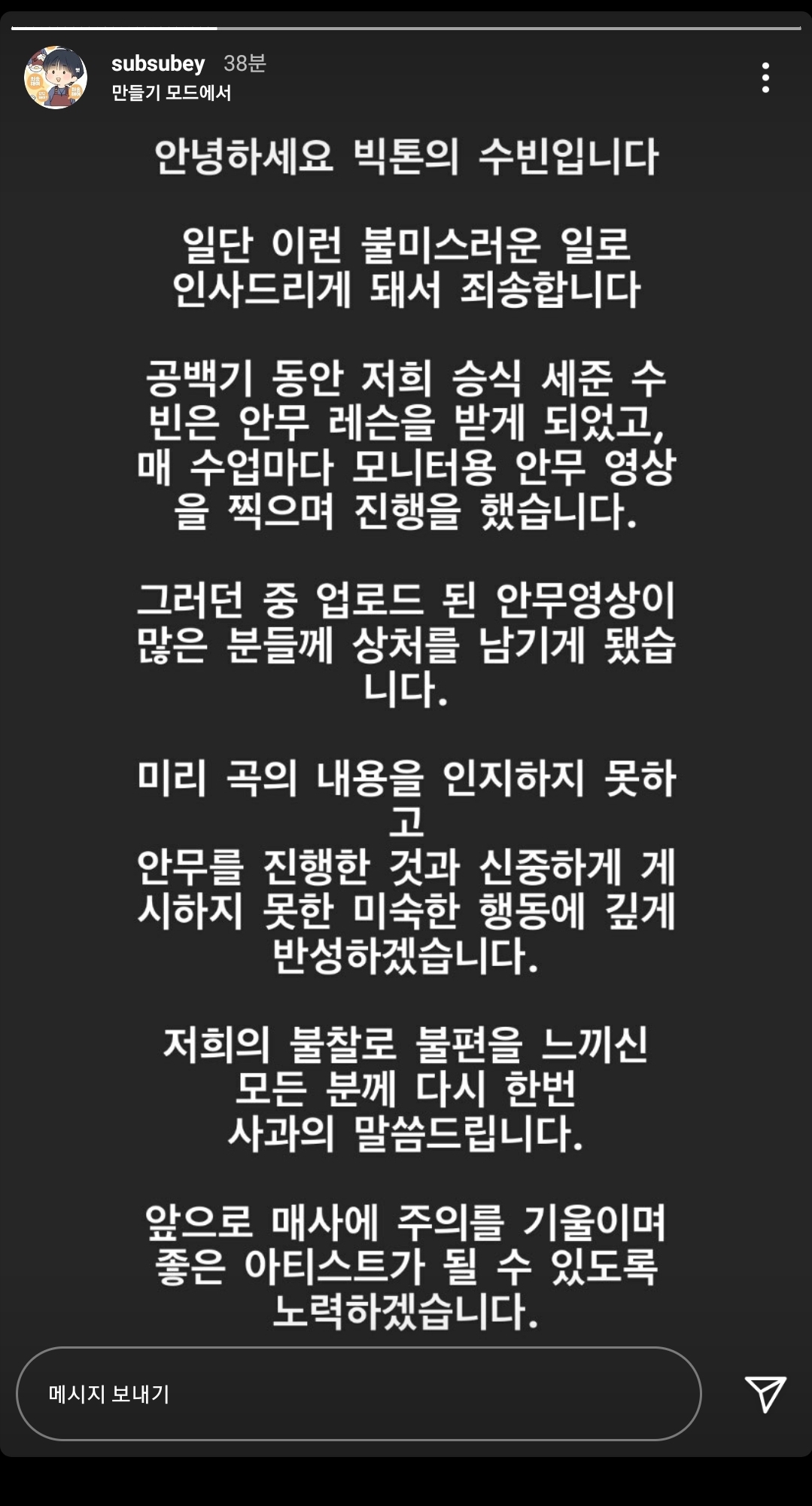 We are deeply reflecting on our lack of understanding of the song and continuing to use it for our dance practice without being cautious. We once again truly apologize for those that were uncomfortable due to our mistake. We will try to always be cautious and work hard to become a better artist.

Hello this is VICTON’s Sejun. I apologize for greeting everyone due to this matter. Recently, I posted a dance practice video without understanding the meaning of the song and brough ta lot of disappointment and pain to our international ALICEs. Also, I did not express a proper apology during my live stream. 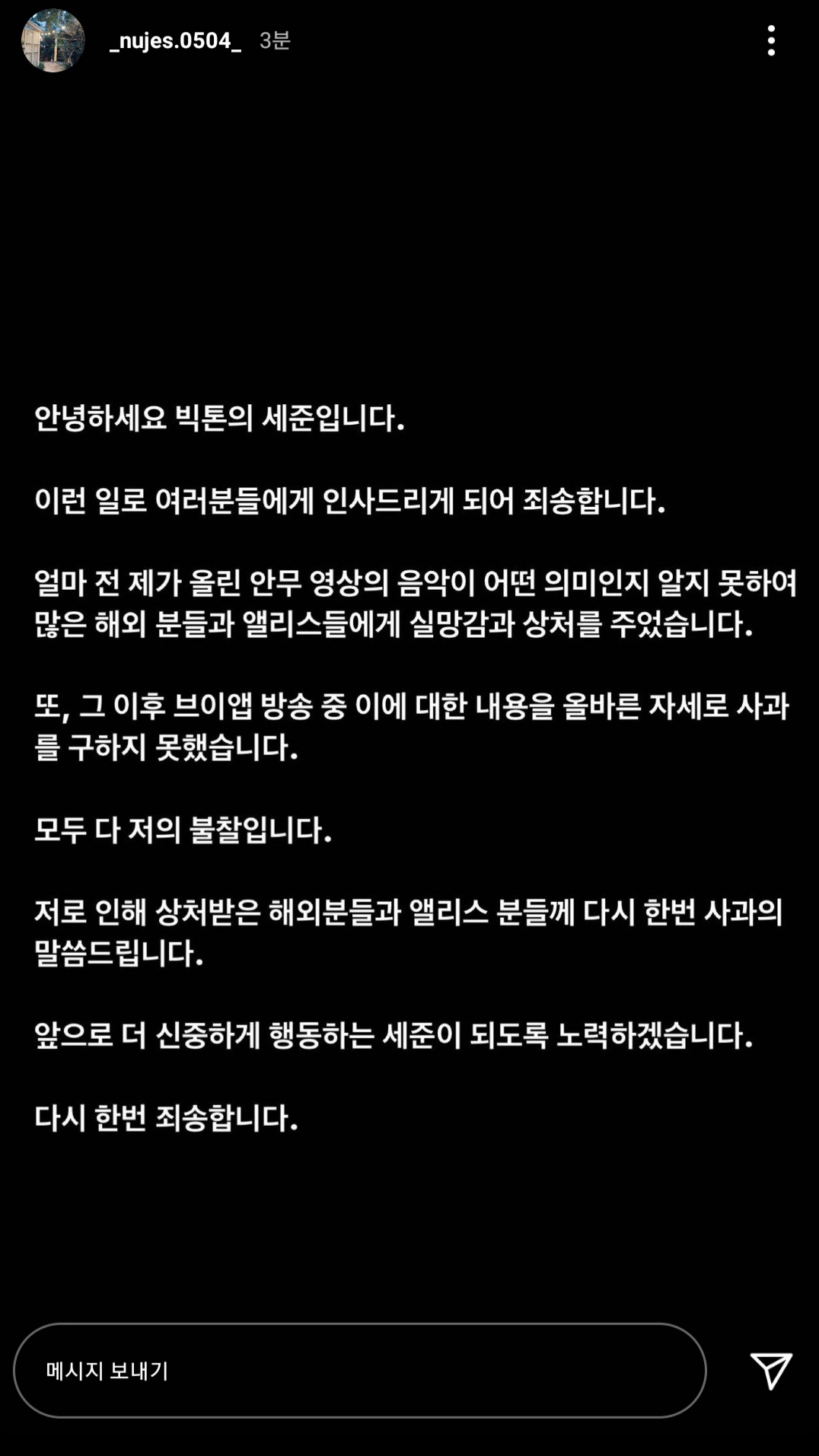 It is my entire fault. I once again apologize to all the international ALICEs that were hurt by me. I will work hard to become a more cautious Sejun. I apologize once again. 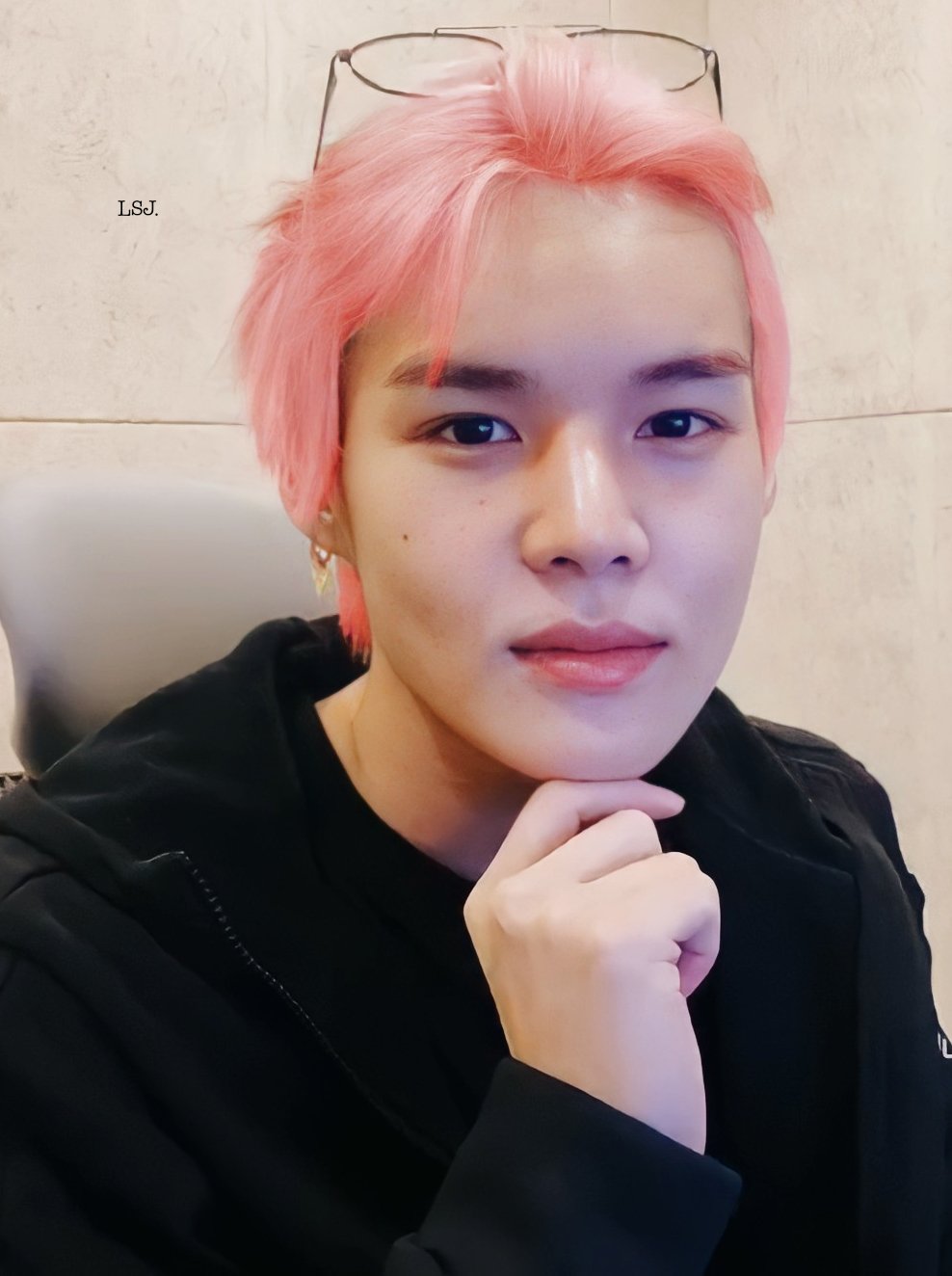 While most fans have accepted the apologies made by the members, they still believe that this is something that should not be overlooked. They hope that both the artists and the company will take this opportunity to reflect and educate themselves on why this was such a big issue and continue to work towards being more cautious in their actions and choices.