All of Wanna One appeared as guests on JTBC’s “Ask Us Anything”!

On the April 7 episode, each member attempted to introduce himself in a witty way. Kang Daniel began, “I’m Kang Daniel, whose name comes up at least once a day on TV,” and made the cast members envious of his popularity.

Yoon Ji Sung announced, “I’m Wanna One’s leader Yoon Ji Sung, who shouts, ‘Guys, gather!’ the most.” When Park Ji Hoon walked up to introduce himself, the cast of “Ask Us Anything” shouted his popular catchphrase, “Save you in my heart,” and said that they’ve seen him around the most.

Ha Sung Woon said, “I’m Ha Sung Woon, who is a bit small but has deep thoughts and big dreams.” He then pointed to Lee Soo Geun‘s seat and added, “I think I can sit there.” Similarly, Bae Jin Young expressed, “My face may be small, but my desire to make people laugh is big,” and admitted, “I’m not funny.” Kim Young Chul made everyone laugh when he commented, “I’ll teach you.”

Kim Jae Hwan introduced himself as someone “who may have the prettiest hands out of all of the celebrities.” He added, “Since I was young, I frequently heard that my hands were pretty.” 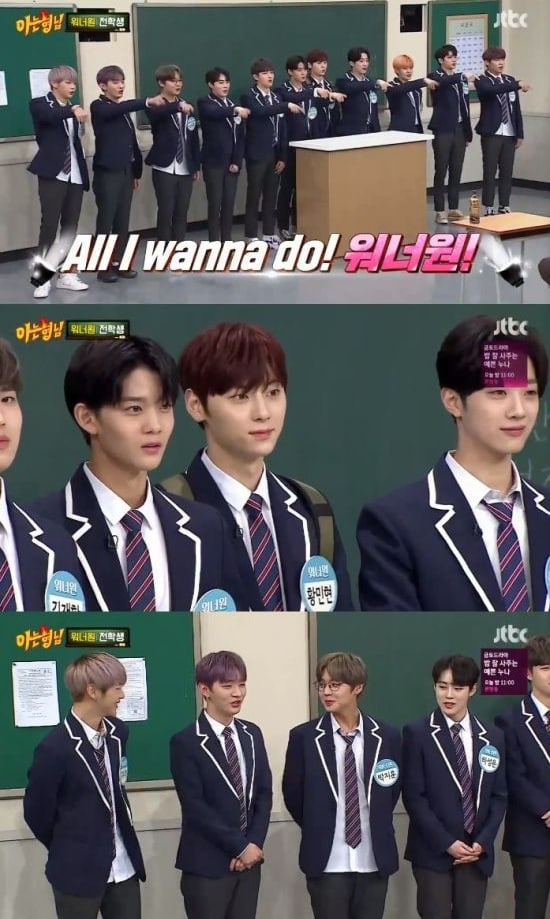 Lai Guan Lin said, “I’m the youngest, but the tallest,” and added that he knows of the Hallyu star and Super Junior member Kim Heechul, making the veteran idol proud.

Lee Dae Hwi announced, “I’m Lee Dae Hwi who has an orchard on his head,” referring to his colorful hair. Looking at the idol’s hair, Seo Jang Hoon expressed concern and said, “What will you do when you dye your hair so much since you’re young?” Lee Dae Hwi responded, “No, I should do it a lot when I’m young.” He then jokingly said to Seo Jang Hoon, “You can’t do it now.”

Ong Seung Woo expressed, “I think I’m going to make people laugh more than Kim Young Chul today, so I came to take his place.” As the last member to introduce himself, Park Woo Jin commented, “We have so many members that just the introductions took 30 minutes.” He continued, “I’m the energizer Park Woo Jin who has energy and doesn’t get tired because of a thing called passion.”

Which member’s introduction was your personal favorite?