Wanna One’s Park Woo Jin and gugudan’s Mina shared what they’d like to do once they turn 20 years old (19 in international age) and become adults.

The latest episode of KBS’s “Battle Trip” that aired on April 28 featured guest appearances by Wanna One’s Park Woo Jin and Park Ji Hoon, as well as gugudan’s Mina and Weki Meki’s Choi Yoojung. It was a “Produce 101” special as Mina and Choi Yoojung had been members of the first season’s project group I.O.I, while Park Woo Jin and Park Ji Hoon are currently promoting as members of the second season’s group Wanna One.

The episode’s theme was “Coming of Age” as all four idols are born in 1999 and will become legal adults this year. Going along with this theme, MC Sung Si Kyung asked them, “What is the thing you want to do most once you become an adult?” 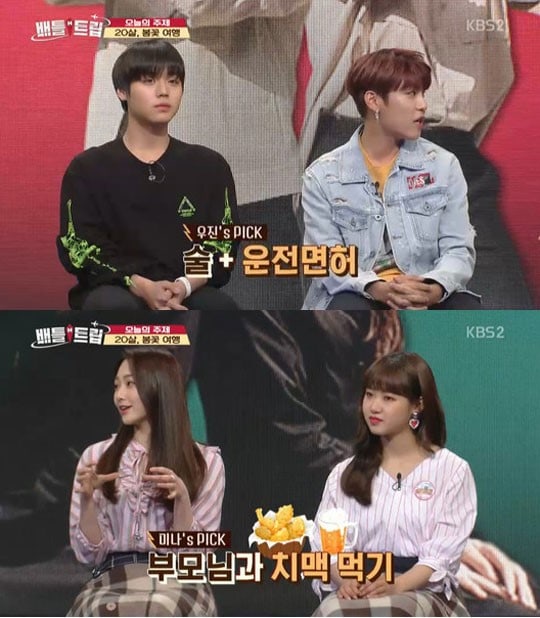 Park Woo Jin replied, “When I become an adult, I want to confidently sit at the table with the older members and have a drink with them when we go out for dinner. Also, I really like cars so I want to get my driver’s license.” Mina stated, “I want to eat chicken and beer with my parents while watching soccer together. I also want to share a glass of soju with them.”

MC Kim Sook had everyone laughing when she commented, “All of your wishes are related to alcohol.”

Meanwhile, the latest episode of “Battle Trip” followed Mina and Choi Yoojung as they traveled to Suncheon and Gwangyang on their “20 years old, Spring Flowers” trip. The upcoming episode will then follow Park Woo Jin and Park Ji Hoon as they embark on their own trip together.