BTOB’s Yook Sungjae shared his outlook on making decisions and mistakes on SBS’s “Master in the House.”

On September 23, the cast continued to experience Los Angeles with their newest master Shin Ae Ra.

During the episode, Shin Ae Ra dropped the cast off at a high school where the students were enjoying a band performance during lunch time. The band’s vocalist was revealed to to be the son of Cha In Pyo and Shin Ae Ra.

He asked Lee Seung Gi and Yook Sungjae to come up to the stage where they sang Mark Ronson’s “Uptown Funk” featuring Bruno Mars. After receiving lots of applause, Lee Seung Gi introduced himself to the crowd as a superstar. Yook Sungjae then said, “I’m a Korean K-pop idol. You guys know BTS? Yeah! [I’m] BTS’s friend.”

Following this mission, the members had a candid conversation with their master. When Shin Ae Ra asked Yook Sungjae if he’s good at making choices, he answered, “I have the ability to look ahead at my future. When I compared the loss between doing something versus not doing it, there were many cases where I was exactly correct.”

He continued, “I accept failure with the mindset of, ‘It’ll be helpful to me.’” Turning to her son, Shin Ae Ra told him, “Take good care of him.” Lee Seung Gi added, “Sometimes, you seem like you’re older than me.” 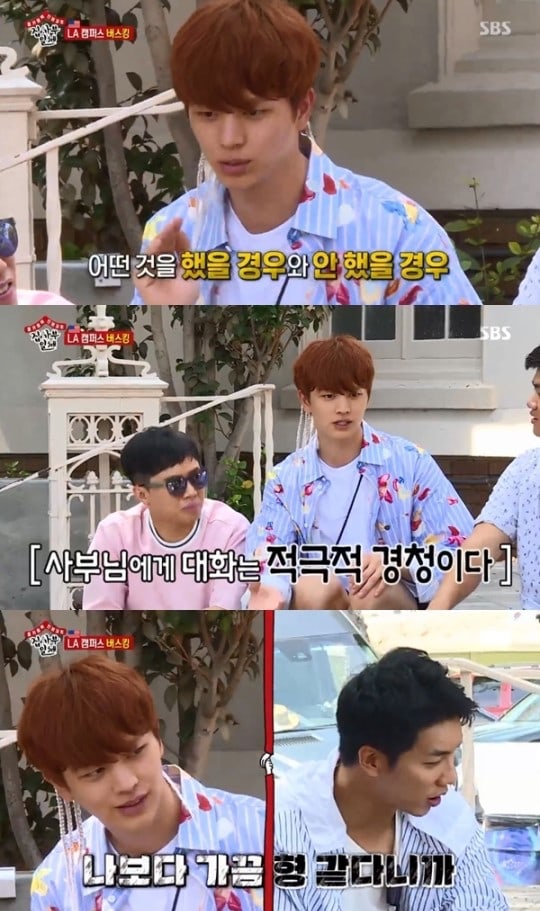 “Master in the House” airs on Sundays at 6:25 p.m. KST. Check out the clip of the cast’s busking below!

Watch an episode of “Master in the House” now: