On the April 26 episode of “Celebrity Bromance,” GOT7’s Jackson and MONSTA X’s Jooheon share a delicious meal while engaging in their trademark bickering.

The meal they share is “army base stew,” a dish that features meat, vegetables, ramen, kimchi, and often beans cooked in spicy broth. 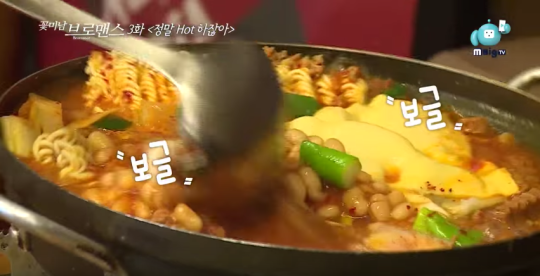 The boys go to a restaurant that Jooheon has gone to since he was young and the woman who runs the shop brags about him to Jackson.

“I thought he would go to Oxford, but he decided to go into entertainment instead,” she says. “He was really cute as a kid.”

The two also share their impressions of one another, with Jackson thinking that Jooheon was tough and hard to approach, while Jooheon mimics the way Jackson talks.

“I didn’t think you would be this bright and happy,” Jackson says about Jooheon.

After the meal the boys argue over who will pay and head over to a coffee shop before deciding to do the something “special” that Jackson has been trying to plan ever since they got together.