The rappers in the show’s top five that competed in the finale of “High School Rapper 2” on April 13 were Yoon Jinyoung (Clloud), Lee Byung Jae (VINXEN), Bae Yeon Seo (Webster B), Kim Ha On (HAON), and Jo Won Woo (H2ADIN).

Yoon Jinyoung was the first up during the finale performances, and he took to the stage with the song “Yaho” featuring Geegooin. He received a score of 379 points.

The next performer was Bae Yeon Seo, who performed the track “Lee Ro Han” featuring ELO and Jessi, earning 447 points.

Lee Byung Jae performed with Woo Won Jae, and received a score of 443.

Kim Ha On was last up and took to the stage with a track featuring Sik-K. He received a score of 445.

After the performances were completed, the final scores for the contestants were revealed. Although Bae Yeon Seo had come out on top in the first round with a score of 447, a different outcome was announced when the overall scores were combined with the second round of votes, in which everyone could only choose one person.

It was Kim Ha On who took the crown in the end with a total score of 579. Kim Ha On cried as he said, “I think I’m having a really, really happy dream.” He promised that his work isn’t over and said he’d continue to show new and cool sides of himself, as well as thanked his family. He received a scholarship of 10 million won (approximately $9,300) and the opportunity to release his track. 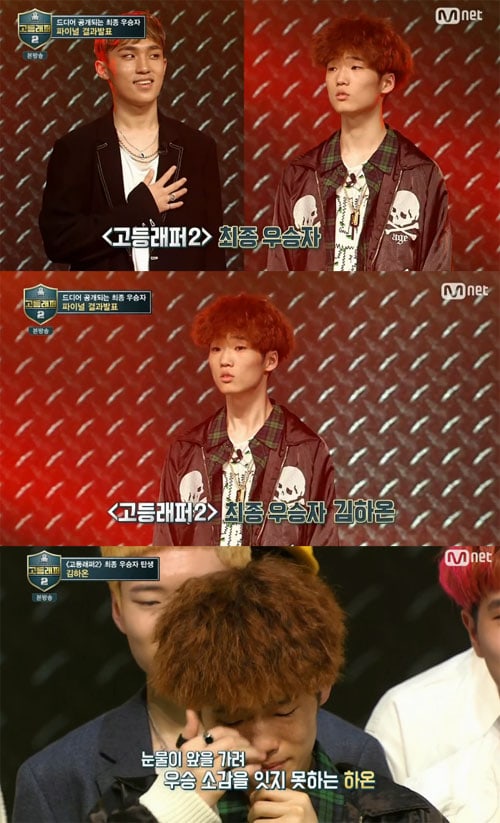 What do you think of the results of “High School Rapper 2”?