Watch: “Infinite Challenge” Plays Its Best Prank Yet on the Cast

With a single car, this week’s “Infinite Challenge” will have your stomach hurting from all the laughter.

On March 2, MBC‘s “Infinite Challenge” aired the second part of the “Wedding Singers,” special, as well as the first part of a new special, “Perfect Senses.”

One by one, the members are blindfolded and are driven around, until they arrive at the “skydiving” site. The producers made sure to correctly reenact the sounds of a helicopter’s propellors, the smell of gasoline, and wind, in order to completely fool the members. 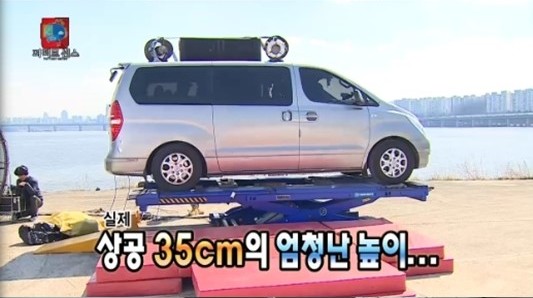 First in line is Yoo Jae Suk, while still blindfolded, is the first to enter the car, which was the “helicopter.” He falls into a state of panic, thinking that he was about to skydive, when they put a seatbeat on him, and hears the order for takeoff. All of this is said in the proper jargon used when riding a helicopter, making the prank even more believable. Eventually, Yoo Jae Suk jumps out, only to realize that it was all a prank when he lands on padding within a split second. At the realization, Yoo Jae Suk begins to get mad at the staff members.

He especially goes over to director Kim Tae Ho, and exclaims, “What are you doing right now? If it wasn’t for the cameras, I would have cursed by now.”

Yoo Jae Suk is not the only one be dumbfounded and express such anger to the staff members. The other members, Jung Joon Ha, Haha, Park Myung Soo, and finally ZE:A‘s Kwanghee all fall for the same prank, and are stunned after finding out the truth.

Hilariously, all the members react similarly to the prank, making viewers laugh at their agony. “Infinite Challenge” impressively manages to entertain with a single car and an amusing prank, once again showing off its potential.

Which member do you think was most hilarious?

These Are Each BTS Member’s Favorite Songs From “Map Of The Soul: 7”

MONSTA X’s I.M Denied His “MOTN” Lyrics Were About Sex, But “Love U” Was A Different Story