Watch: IU Hangs Out With A Lucky Fan And Shares Meaningful Life Advice

On the April 29 web episode of Dingo Studios’s “Well Done Again Today,” IU surprised a fan who dreams of becoming a singer-songwriter.

The episode began by showing the busy daily routine of Yoo Rim, the fan. After a long day at work at her part-time job, Yoo Rim ended her day with vocal practice. IU surprised her in the practice room, as she sneaked in behind Yoo Rim while she was singing. 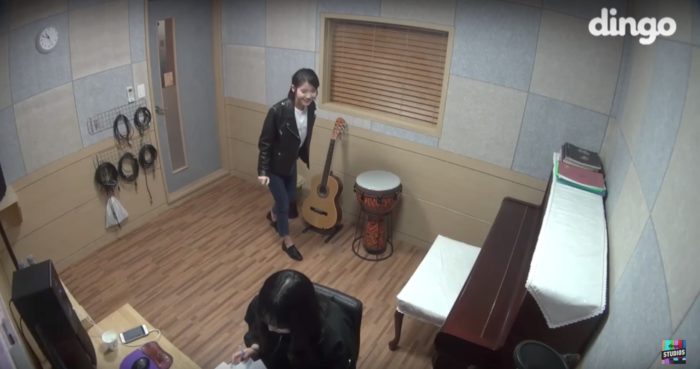 At the end of the song, IU clapped to catch Yoo Rim’s attention. Yoo Rim was completely shocked to see IU sitting behind her, and she began to cry. IU complimented Yoo Rim’s singing, but when she saw Yoo Rim was crying, IU tried to comfort her and brought her tissues. 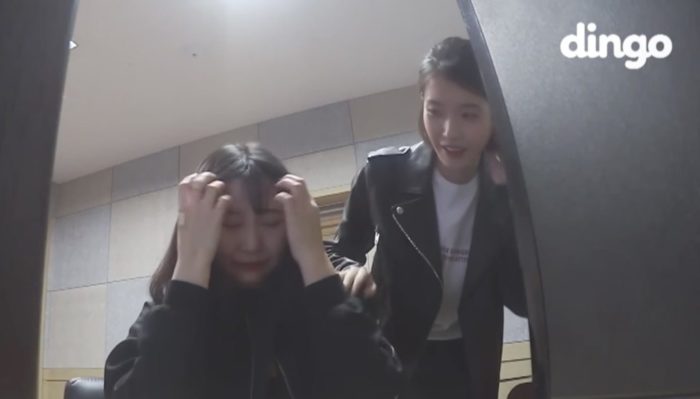 IU and Yoo Rim started to talk, and the two quickly became comfortable with each other. Yoo Rim explained she’s usually very shy with new people, but that IU doesn’t feel like a stranger. IU agreed and said, “It feels like we already know each other. It’s such a relief, thank you so much [for being so welcoming] because I am sometimes shy too.” IU assured Yoo Rim they could talk about anything, and that they had plenty of time to chat because the two of them will eat together and hang out for awhile. 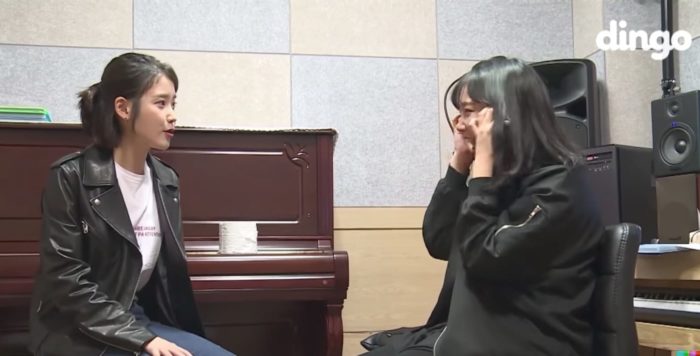 They ordered a pizza, and as they waited for it to arrive, the two began to talk about more serious topics. IU asked Yoo Rim where she used the money she earned from her part-time job. Yoo Rim explained that her family is not well-off financially, so she has to work to earn what she needs for her living expenses. Yoo Rim said, “I feel like I’m just living worrying about money everyday. I think sometimes, just once, I’d like to live comfortably without having to worry about money.” 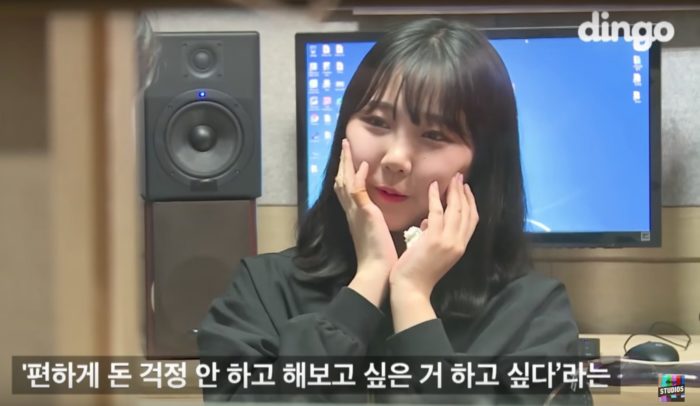 Hearing Yoo Rim’s words, IU said she could really relate since there was a time in her life when she felt the same way. IU shared how her family’s financial situation suddenly worsened when she was in the final years of elementary school, and how it remained that way before she found success. IU further empathized with how it feels to be in those circumstances, “You feel upset, and there’s nowhere you can lean on for support.”

Following IU’s lead, Yoo Rim shared a little more about her family. Yoo Rim explained how her parents divorced after she entered her first year of high school, and how although her dad did not talk to her about it, her mom told her while crying. IU shared her insight from her own relationship with her mom. IU explained that when she was younger, if she felt sad or that things were unfair, she could take it out on her mom using the excuse that she was young and the child. One day, however, she realized that her mom was likely struggling 150 times more than she was. 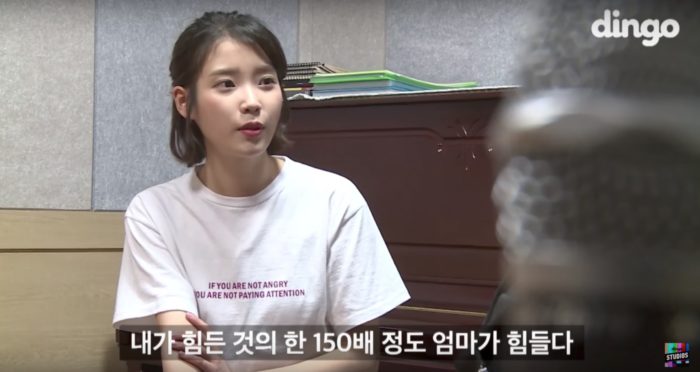 Although IU could vent and share the burden of her feelings with her mom, IU realized that her mom did not have anybody to do the same for her. IU said, “When I realized that, it helped me to get my head on straight and focus.” To encourage Yoo Rim, IU said, “To your mom, you are probably the greatest source of support and strength.”

IU asked Yoo Rim about her relationship with her father. Yoo Rim shared honestly about how they do not have anything to talk about so it is awkward, and how she is jealous when she goes to her friends’ homes because it seems like their families are so happy together. As Yoo Rim opened up about her personal thoughts, IU listened sincerely like a true friend. At the end, IU marveled, “We have so much in common, it’s almost weird. But your personality is so much brighter than mine, and you seem much stronger [than me], so I am very glad.” 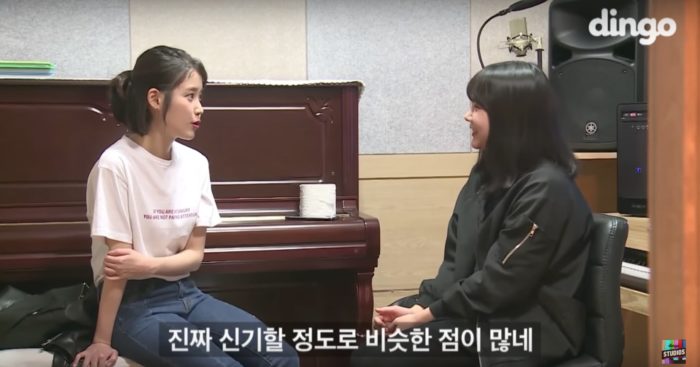 IU then asked Yoo Rim if she’s ever gone through a slump while singing. Yoo Rim explained how she began pursuing singing because she loved it so much, but that it was much harder now than when she first started. IU told her she felt the same during her trainee years, and how she went from feeling very confident in her abilities to feeling very intimidated by all the other amazing singers around her. IU then encouraged Yoo Rim by pointing out Yoo Rim’s specific strengths when singing. She assured Yoo Rim that when it comes to singing, she doesn’t give out empty compliments.

The pizza arrived, and as they began to eat, IU urged Yoo Rim to ask her anything Yoo Rim would like to know about, since IU had asked plenty of her own questions too. Yoo Rim asked IU how to compose songs and write lyrics well. IU responded, “Ever since I was young, I always enjoyed writing. In the process of making an album, writing lyrics is the most fun. The stress I feel while coming up with lyrics is enjoyable.” 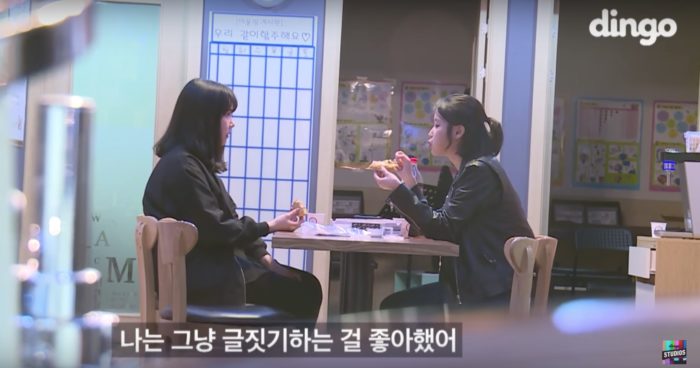 When Yoo Rim asked again what it takes to be good at creating songs, IU wisely advised, “The standard of what is ‘good’ is too ambiguous. Since you can’t make everyone happy, you should find sometime that is uniquely you. Then, what you have to do is to discover the people who like that unique aspect of you. Words I like, my thoughts. If there are people who listen to and enjoy [my work] because they like those [words and thoughts] too, that’s when I think perhaps it’s a job well done.”

The two then head back to the practice room to sing a duet together, at Yoo Rim’s request. They chose to sing IU’s song “Lost Child” together. Afterward, IU explained how she had not sang that song in a while, and complimented Yoo Rim on her interpretation of the song. 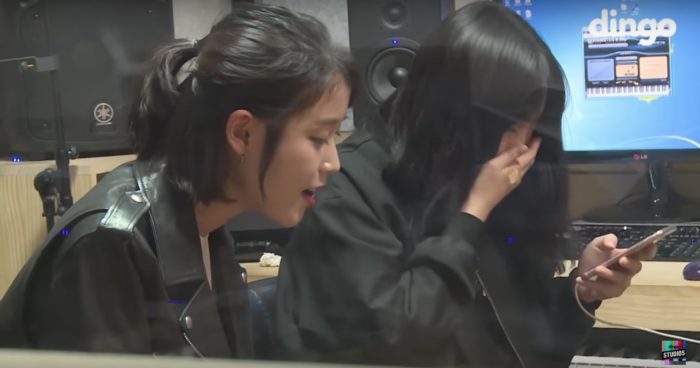 IU then excused herself to fix her makeup, but actually she had left to get the surprise gifts she had prepared for Yoo Rim. Returning with both hands full of shopping bags, IU explained, “I thought really hard about what you might like—but because I didn’t know what you would like, I brought everything (laughs).” 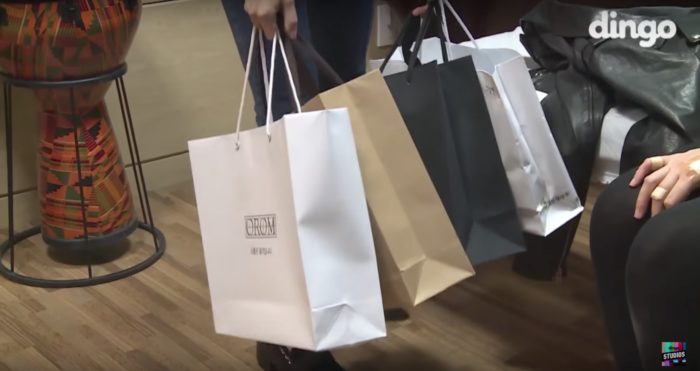 IU had brought Yoo Rim muscle pain relief patches because she heard Yoo Rim often became sore from work, the same model of headphones as IU, a leather-bound notebook for writing songs signed by IU, and a microphone to help Yoo Rim practice.

After giving Yoo Rim her gifts, IU posed for a photo with Yoo Rim, and then she walked Yoo Rim home. Before saying goodbye, Yoo Rim gave IU a book as a present. She apologized because it was not new, but a copy that she had already read. Graciously, IU said she actually really liked secondhand books and thanked Yoo Rim for the gift. 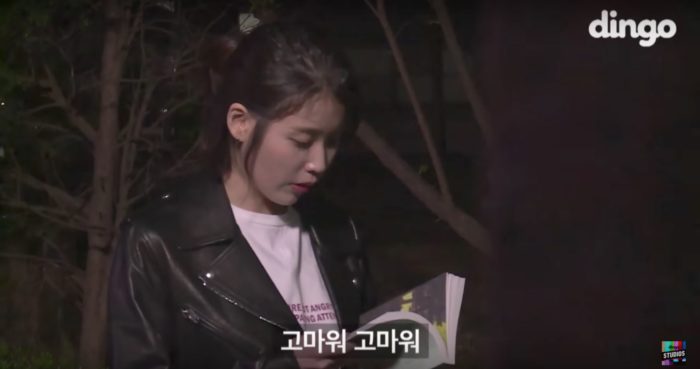 The episode ended with the two sharing a warm hug. Undoubtedly, IU helped make this day unforgettable for her fan, Yoo Rim. 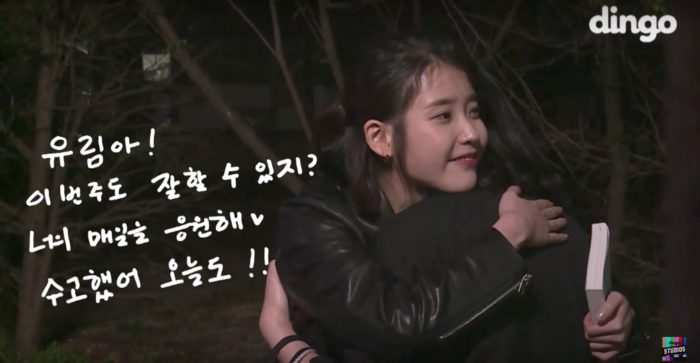