Kim Go Eun wowed with her gorgeous and emotive singing voice on JTBC’s “Your Song.”

On the February 7 episode of the show, Jung Jae Il chose Patti Kim’s song “Love That Left Autumn Behind” and invited actress Kim Go Eun to work together with him.

As his reasoning for asking the actress on the show for this project, Jung Jae Il explained, “She’s not a singer, but I heard that she’s good at singing, and when I looked up her videos I thought that it would fit well with her image.”

After hearing the song, Kim Go Eun said that she thought she would have to practice hard, and that her most important task would be getting rid of any feelings of shyness. She also said that she had been surprised when she had first received an offer to appear on the show, especially as she thought Jung Jae Il wouldn’t have heard her sing before. While this wasn’t her first time ever singing on television, the actress rarely performs songs on TV.

When a crew member told her that there was a rumor in the industry that she’s good at singing, Kim Go Eun laughed and said, “I’ve been to karaoke with senior actors or staff members.”

Kim Go Eun previously sang soundtracks for her own projects. She said, “When I see myself singing, I get embarrassed and want to hide,” and added, “When I sing, my voice sounds different than it usually does.” 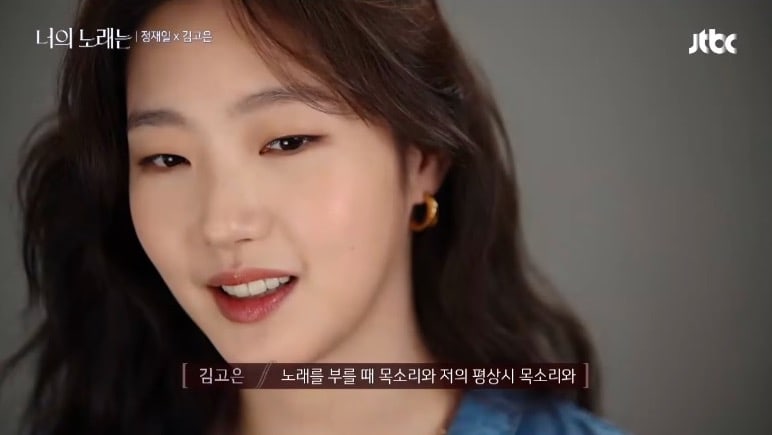 When talking about Patti Kim’s song that they were working on for the show, Kim Go Eun said, “I liked it because the lyrics are so beautiful and poetic.” She came to Jung Jae Il’s studio to practice whenever she had time in her movie filming schedule.

Before she went on stage, Kim Go Eun said, “I feel like my heart is going to burst.” However, she amazed viewers with her beautiful performance.