Watch: Lee Eui Woong Gets A Surprise From Fans While Working At His Parents’ Store

“Nest Escape 3” is a reality program where celebrity children or children of star parents go on a trip to a foreign country to tackle challenges on their own. The parents watch the footage and comment from the studio.

On the May 15 episode, Lee Eui Woong helped out at his parents’ stationery store. Before Lee Eui Woong competed on “Produce 101 Season 2,” he appeared on the show “Hello Counselor” to share his concern about having to work at his parent’s business and also live his life as a young student. In an interview last summer, he said that he now realizes how working at the store has been beneficial to him too.

In “Nest Escape 3,” a girl and her mother walked into the store to purchase notebooks, and the mother told Lee Eui Woong that they were both fans of him.

He thanked them and helped them find the notebooks that they were looking for. The girl didn’t look up and stayed quiet throughout the interaction. When the mother asked her why she was so quiet, she quietly said, “I can’t look at him because he’s too good looking.”

As the day went by, more students came and Lee Eui Woong’s parents proudly watched as fans filled the store. One group of fans surprised him for his birthday with a cake and sang him “Happy Birthday” in the store.

He hugged his mother and thanked her for giving birth to him, and the fans also thanked his parents. He fed his dad and mother some cake before enjoying it with his fans. 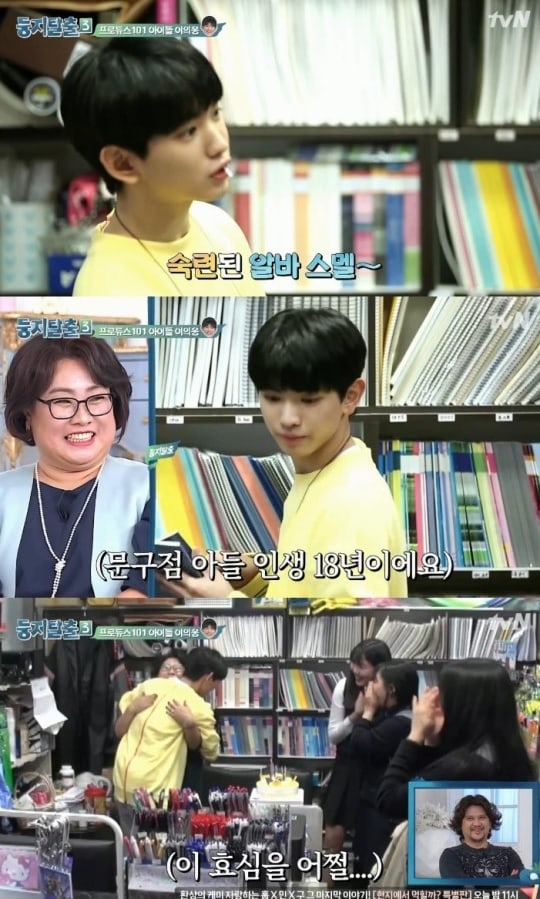 During his interview, Lee Eui Woong said, “To be honest, I was a bit shocked. I’ve never met fans at the stationery store and never received such a big gift like this, so I was really thankful. It was so cute.”