“Return” is a thriller drama about a lawyer who grew up in a low socioeconomic class and a lawyer who is the wife of a suspected murderer who take on a murder case involving upper-class elites.

The teaser starts off with star lawyer Choi Ja Hye (Go Hyun Jung) who calmly says “I am Choi Ja Hye who is in charge of Kang In Ho’s case,” with a determined look on her face and extends her hand out to shake someone’s hand.

She nonchalantly asks, “Did you kill Yeom Mi Jung?” to the suspect (Park Ki Woong) sitting across from her. The teaser quickly shows scenes of someone setting fire to a house, a hand sticking out of a suitcase, a body being thrown out of a car, and a car about to hit a girl on the sidewalk. 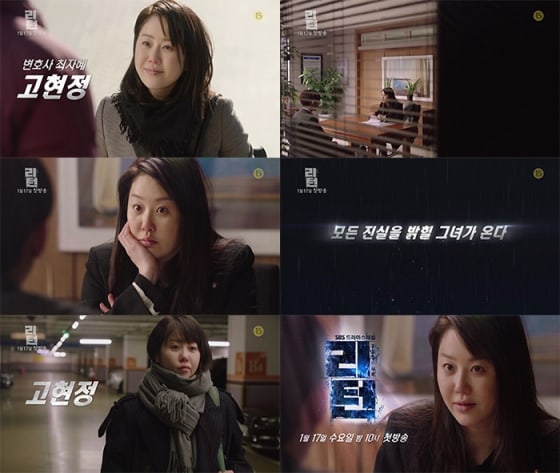 Lee Jin Wook then enters the teaser as he walks by her and intentionally bumps his shoulder against her. He flashes his police badge that states his name Dok Go Young, then handcuffs someone. He is also involved in an action-packed fight scene inside of a restaurant.

The screen shows the text “a mysterious murder and four suspects” and the four actors Park Ki Woong, Bong Tae Kyu, Yoon Jong Hoon, and Shin Sung Rok, leading viewers to believe that these four are the suspects of this murder.

At the end, the words “The woman who will reveal the truth is coming” appears on the screen followed by Choi Ja Hye walking across a parking garage. The teaser ends with her asking, “Can I meet with my client?” raising anticipation about her character and the storyline.

“Return” will premiere on Wednesday, January 17 at 10 p.m. KST. Watch the teaser below!