tvN’s “About Time” has released a fun making film where the cast is unable to hide their laughter.

In the beginning, Im Se Mi and Lee Sung Kyung are practicing for their scene together. Despite the ill-fated relationship between their two characters, the two actresses joke and laugh brightly behind the scenes. Lee Sung Kyung drinks water from a bottle through a straw while making a cute expression, and Im Se Mi watches her from nearby with a motherly smile on her face.

In the next scene, Lee Sang Yoon, Lee Sung Kyung, Kim Hae Sook, and Jang Gwang are filming their movie theater scene. Jang Gwang is supposed to appear with a duck doll out of nowhere, catching Kim Hae Sook off-guard. When she asks what it is, he is supposed to reply with, “a secret doll.” However, Jang Gwang makes a cute mistake as he labels the doll a “secret weapon” instead, causing the cast and crew to burst into uncontrollable laughter. 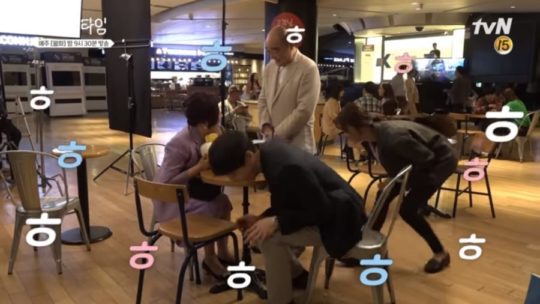 The filming continues, but Lee Sang Yoon can’t stop laughing every time he sees the doll, which makes the other actors laugh as well. Kim Hae Sook tells him to hurry up and go laugh it off, and Lee Sang Yoon leans against the black wall with a smile of defeat. Fortunately, Lee Sang Yoon gets a hold of himself, and they’re able to successfully finish filming.

The final scene Lee Sang Yoon and Lee Sung Kyung prepares for is the one where he has to bite off a piece of the cracker in her mouth. However, it’s Lee Sung Kyung who catches the laughing virus this time, and Lee Sang Yoon smiles along with her. After several retakes, the actors finally complete the romantic scene.

Watch the making film below!

Catch the first episode if you haven’t already!