In the latest video from “MIXNINE,” the male contestants put their strength, speed, and flexibility to the test as they faced off in a hilarious fitness battle.

The five teams from the formation battle took a break from practicing to compete against one another in a variety of amusing games. The MCs for the event were Kim Kook Heon (Music Works Entertainment), Park Seung Jun (YNB Entertainment), and Yim Young Jun (ELEVEN9 Entertainment). 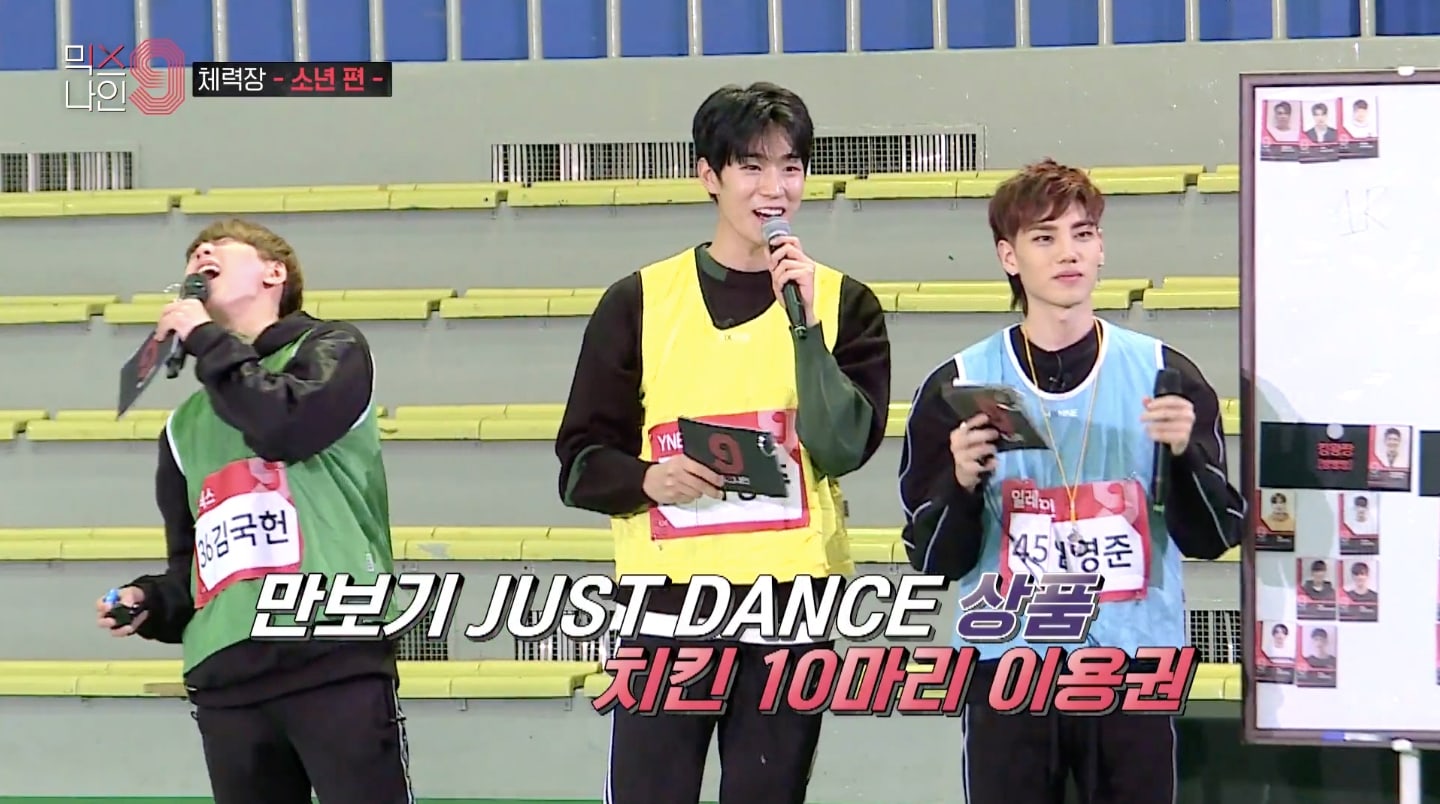 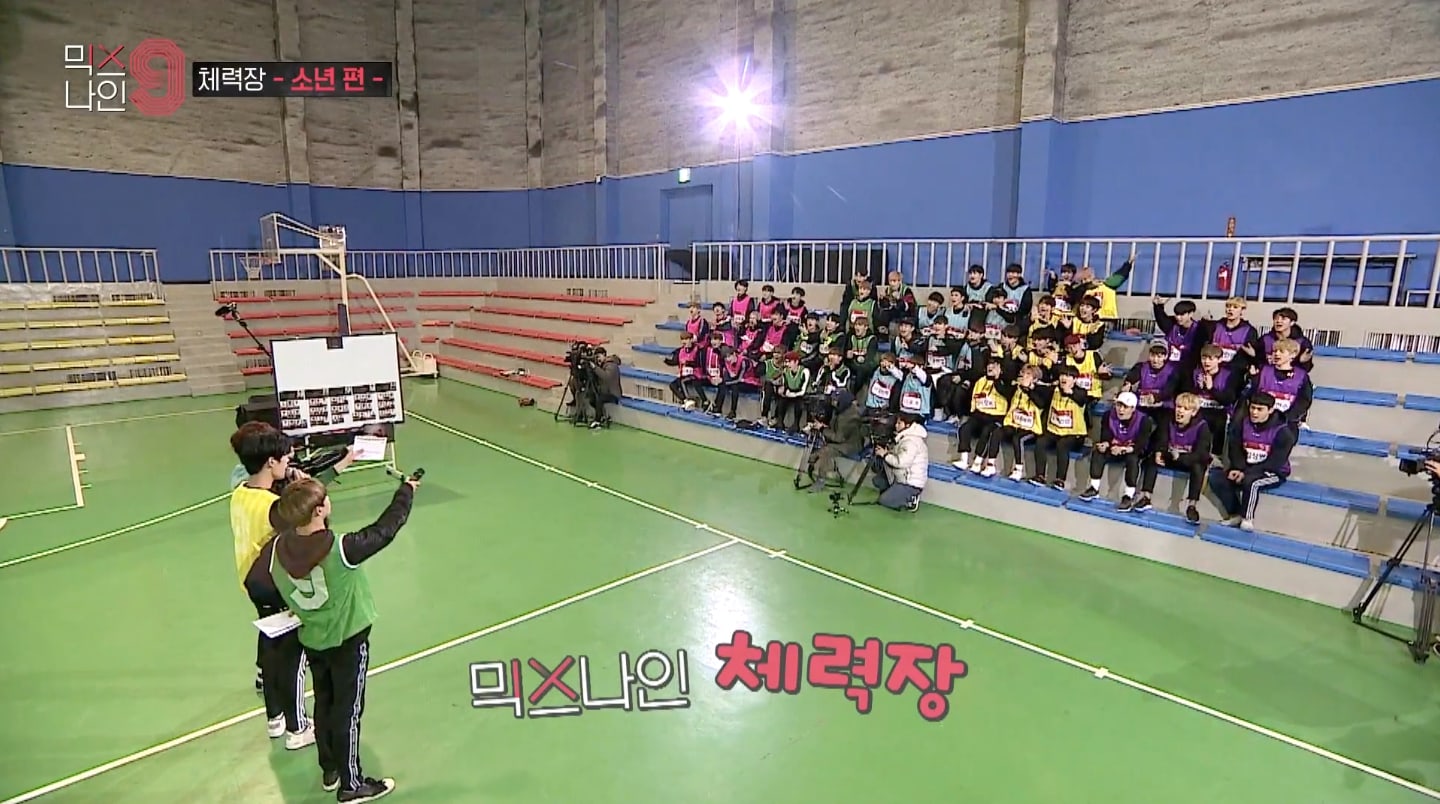 In the first game, the contestants wore pedometers while dancing and tried to record the highest step count while also tailoring their dance moves to the style requested by the MCs.

The contestants gave it their all, with a few of the competitors appearing to have given up on the game altogether in favor of dancing their hearts out. 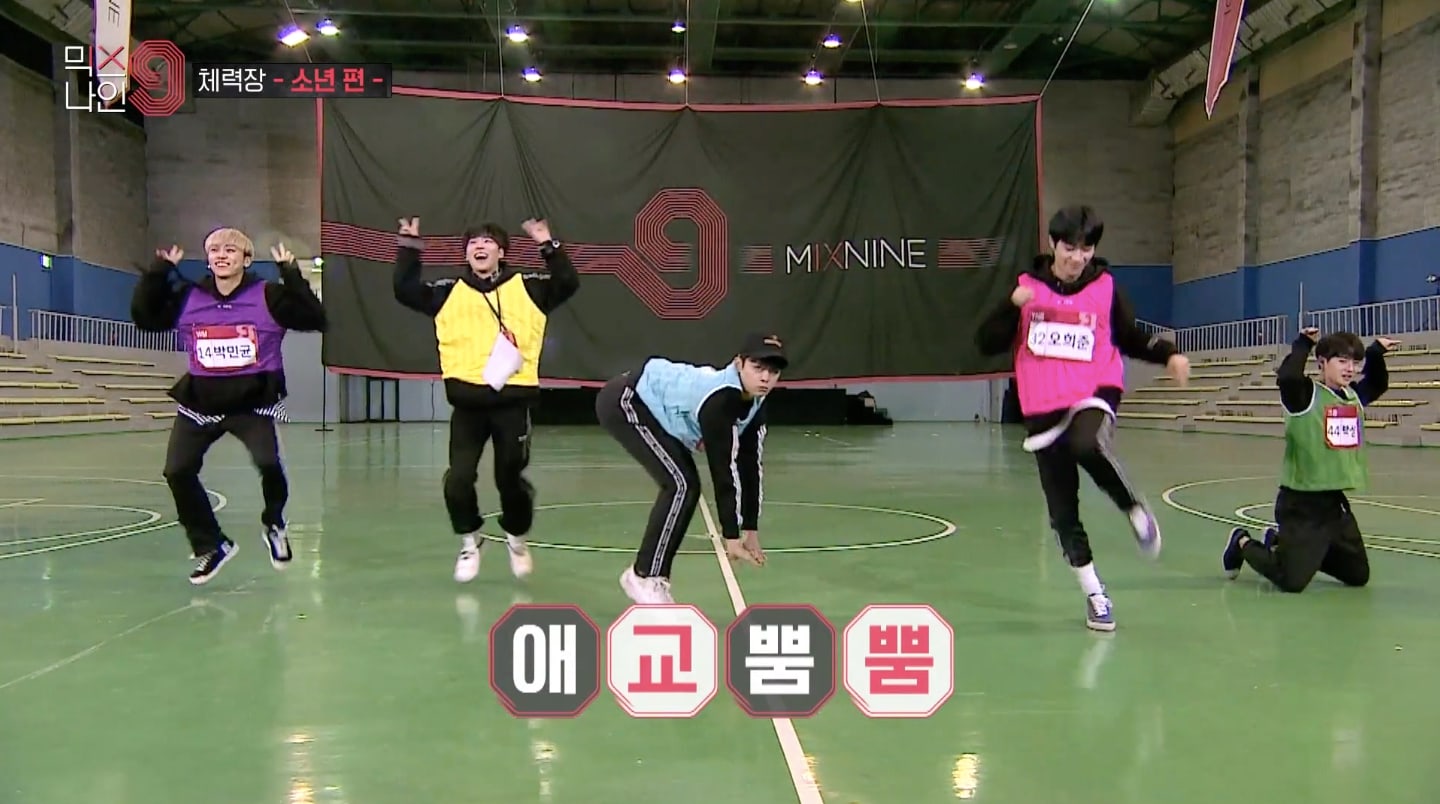 The “Hug” team won both rounds of the game, with Park Min Kyun (WM Entertainment) and Kim Sang Won (Staro Entertainment) leading their team to victory. 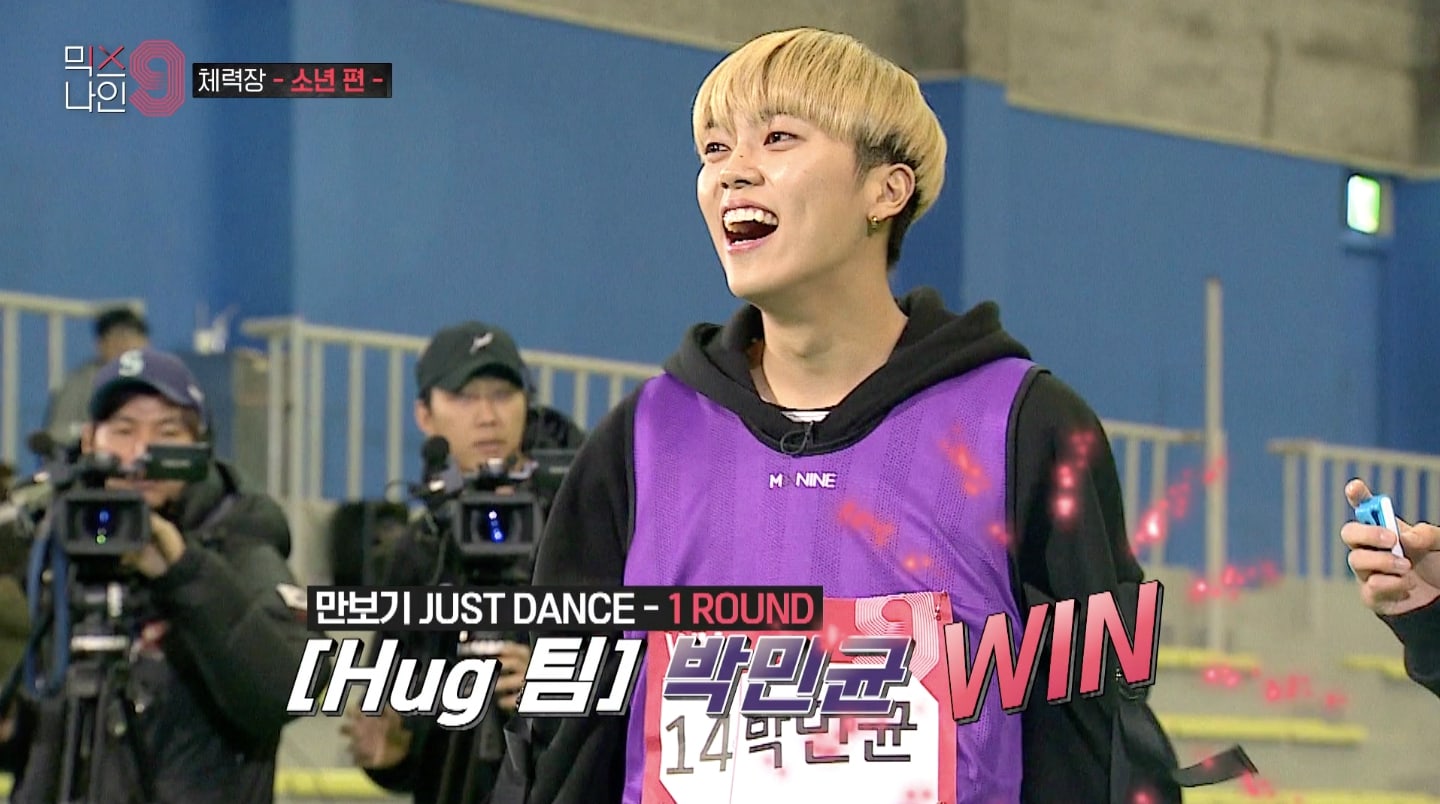 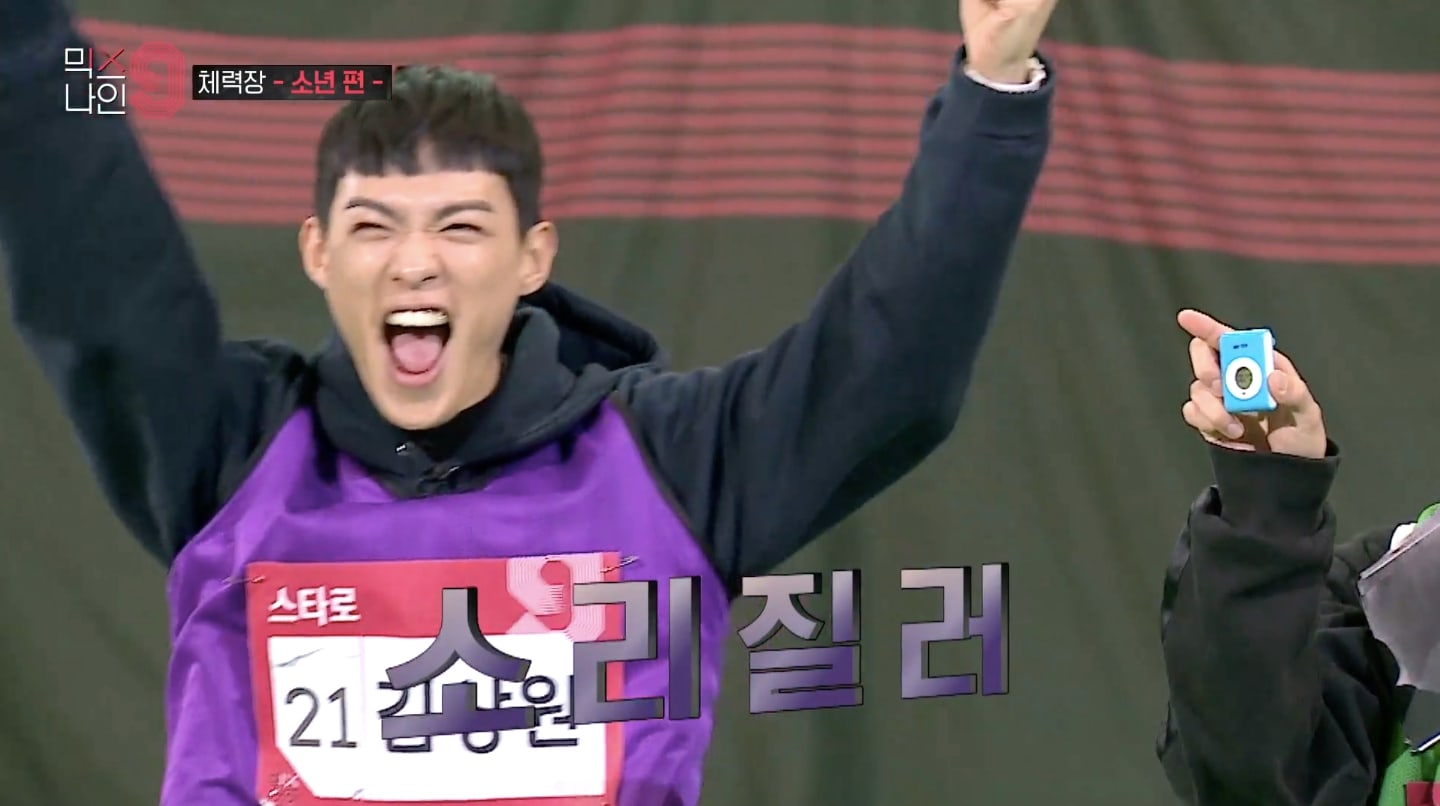 The second game pitted the contestants against one another in a thigh wrestling tournament to determine who had the strongest legs. After pairing off, the contestants attempted to either force each other’s legs open or keep their own legs closed using only their thigh muscles. 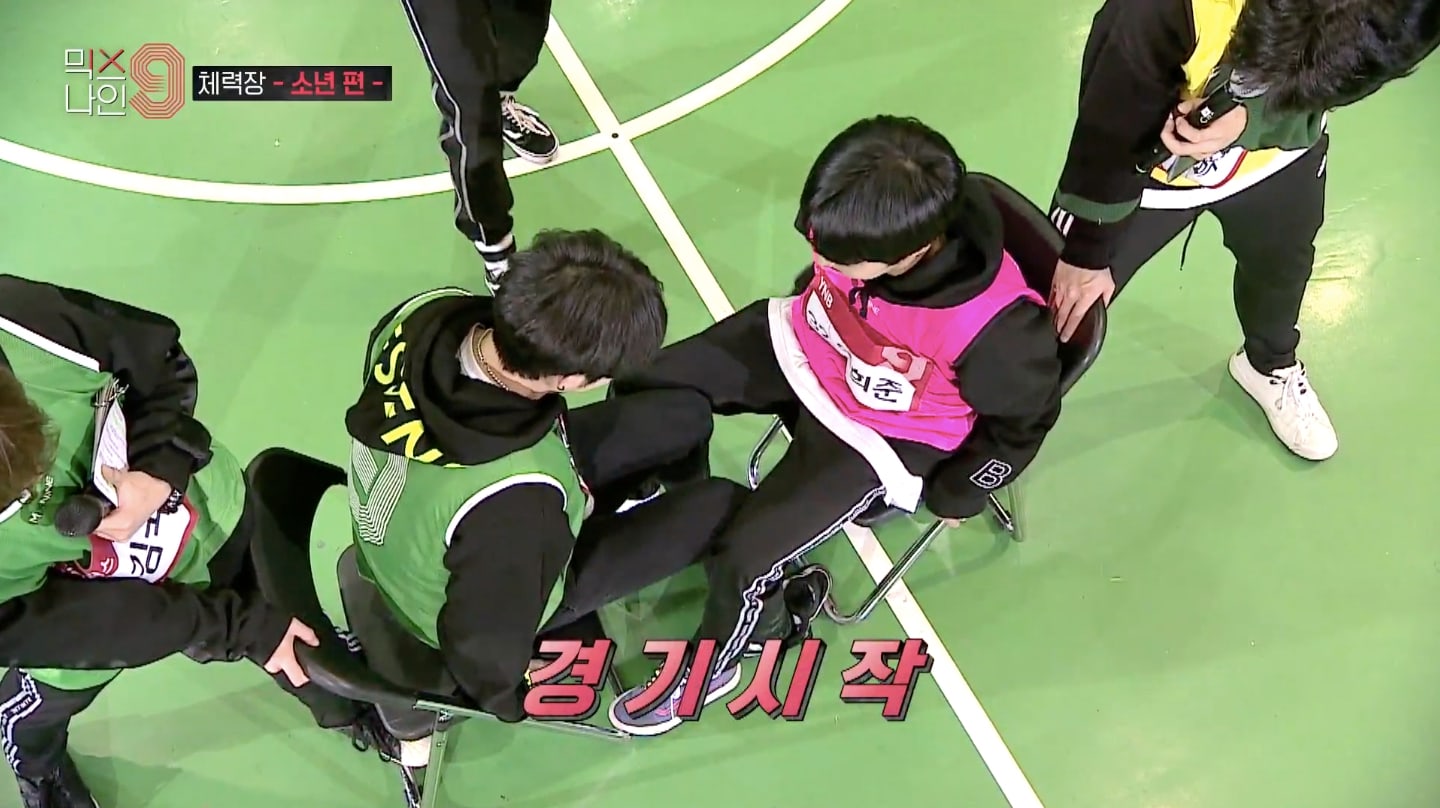 Unfortunately, there were a few casualties along the way. 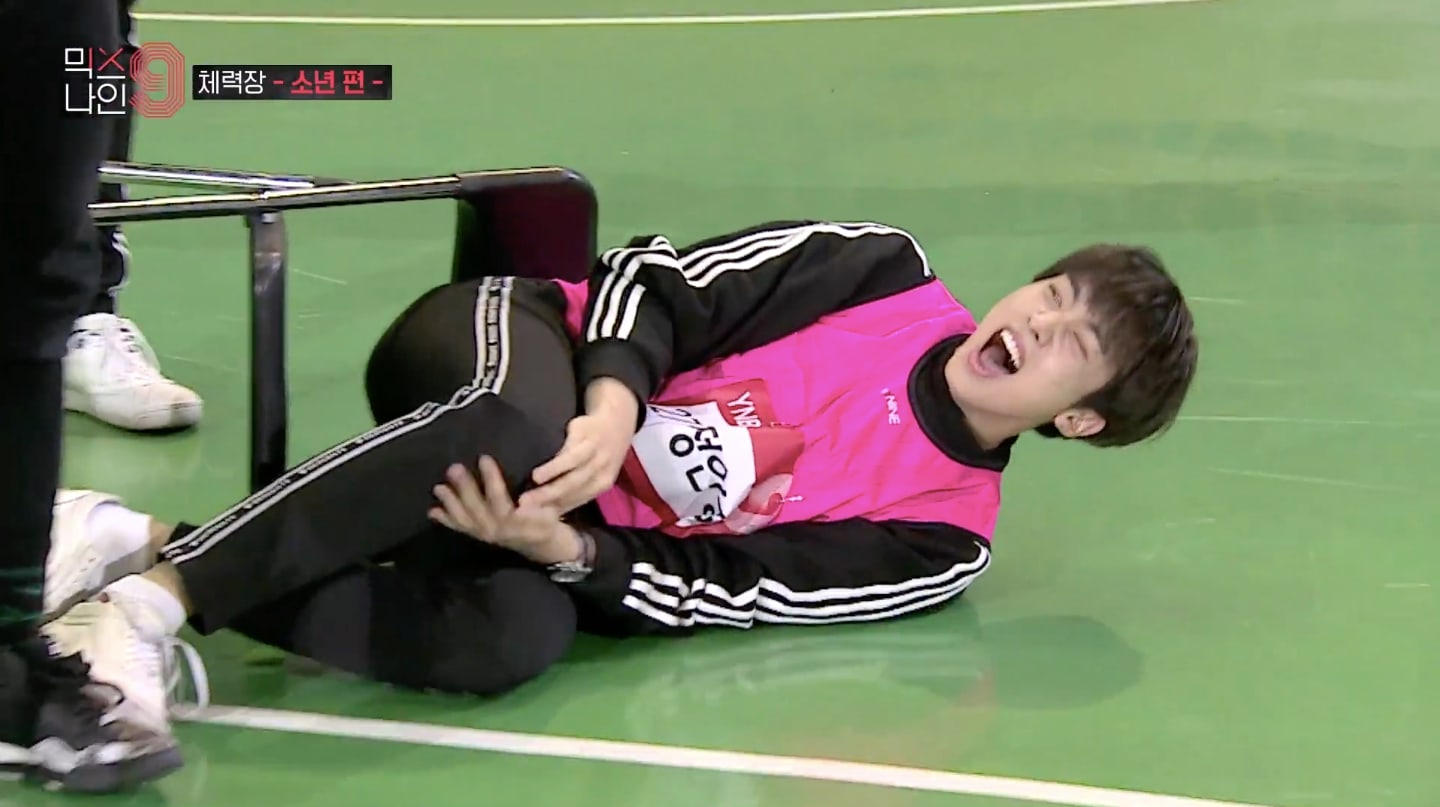 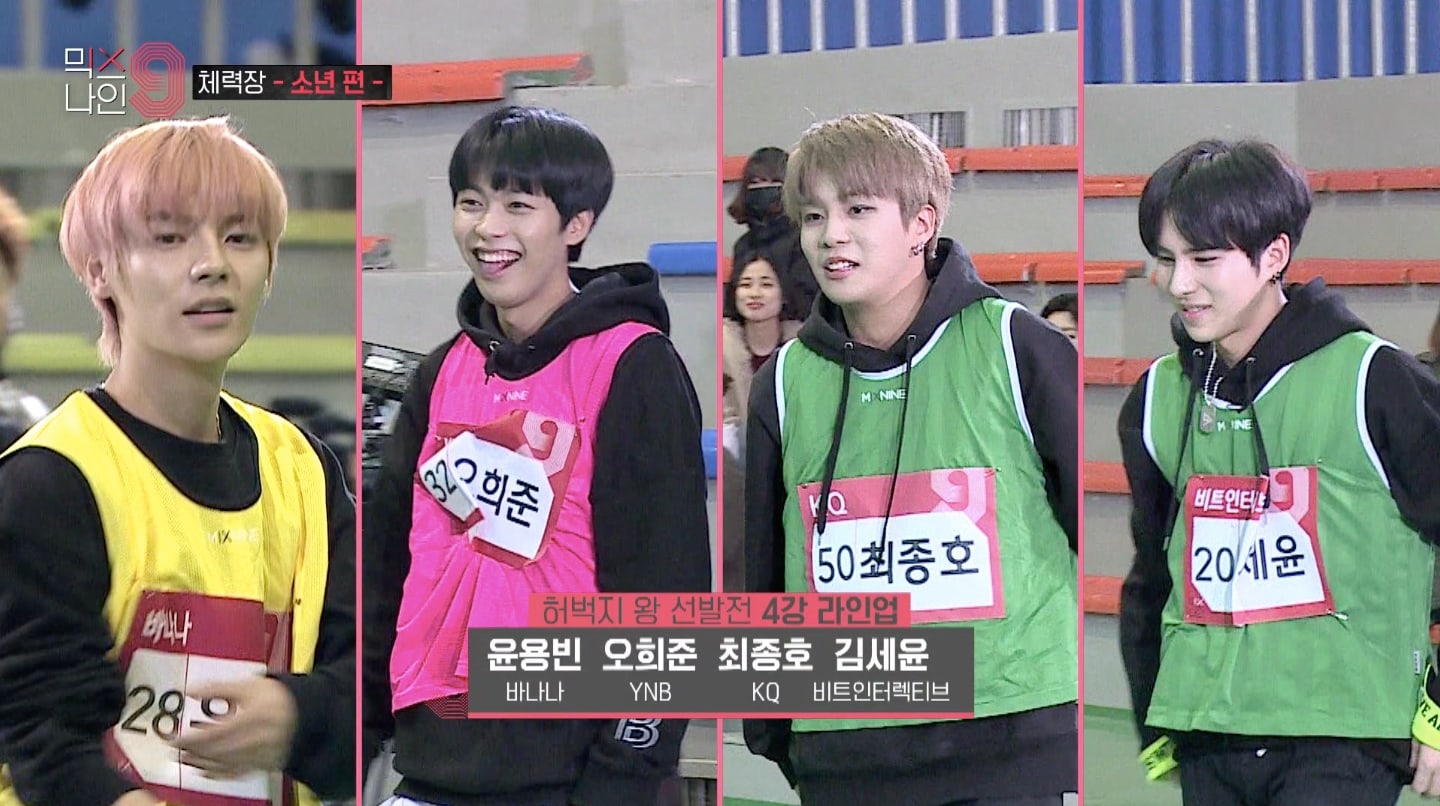 After winning their respective rounds, Oh Hee Jun and Kim Seh Yoon both advanced to the finals. 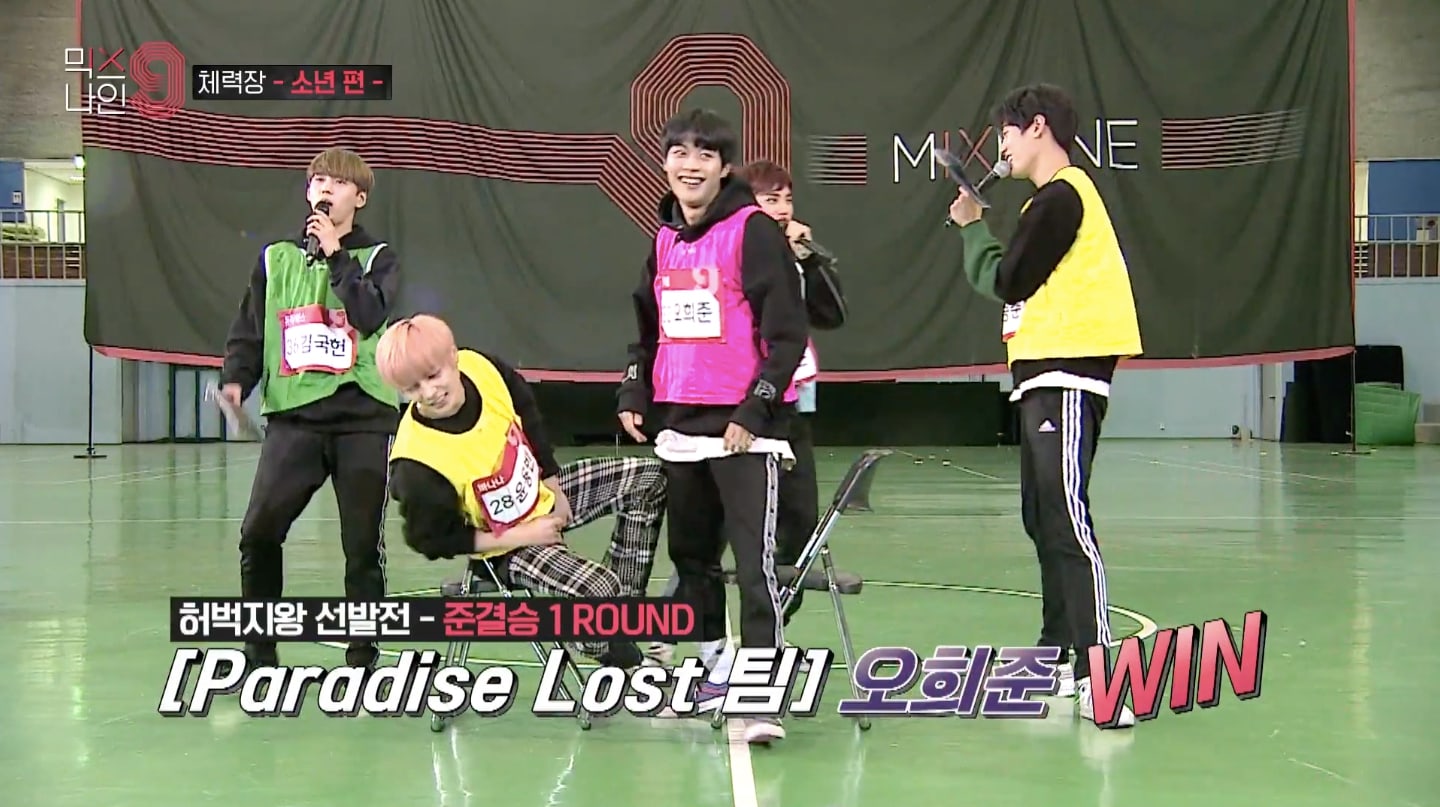 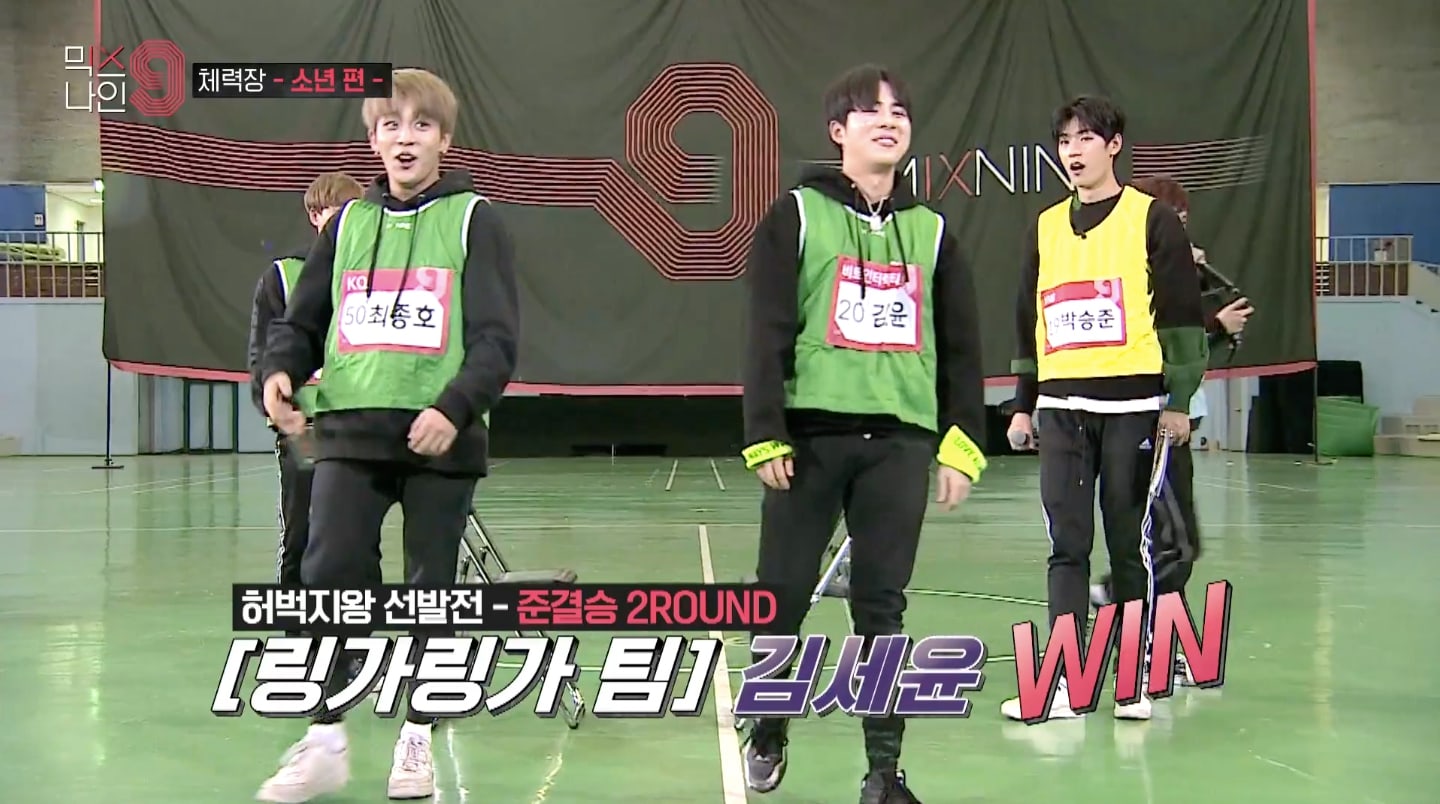 In the end, it was Oh Hee Jun who claimed the ultimate victory and won the title of “MIXNINE’s” strongest legs. 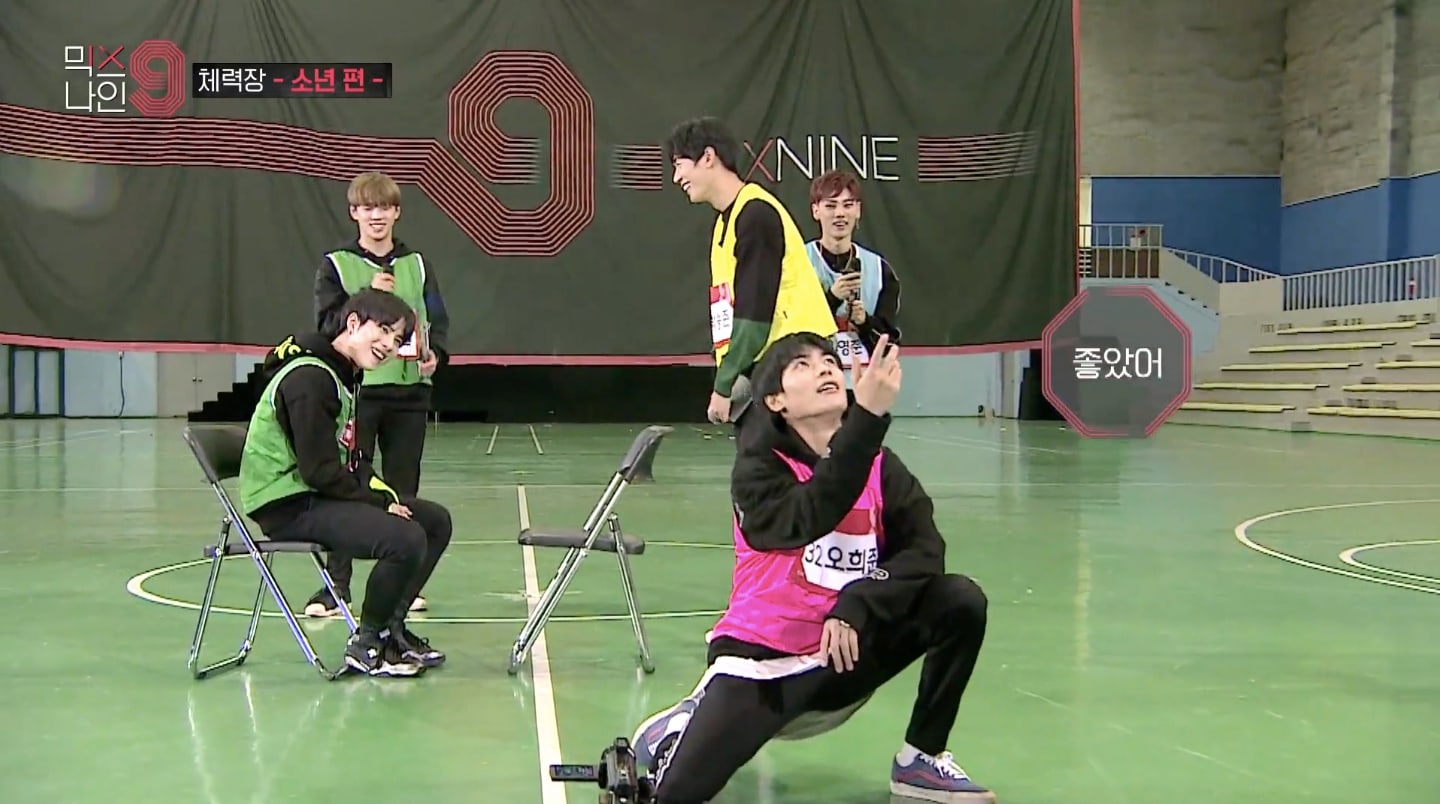 Next up was a traditional Korean wrestling tournament. Woo Jin Young (Happyface Entertainment) and Choi Hyun Suk (YG Entertainment) kicked things off by demonstrating the game in a practice round. 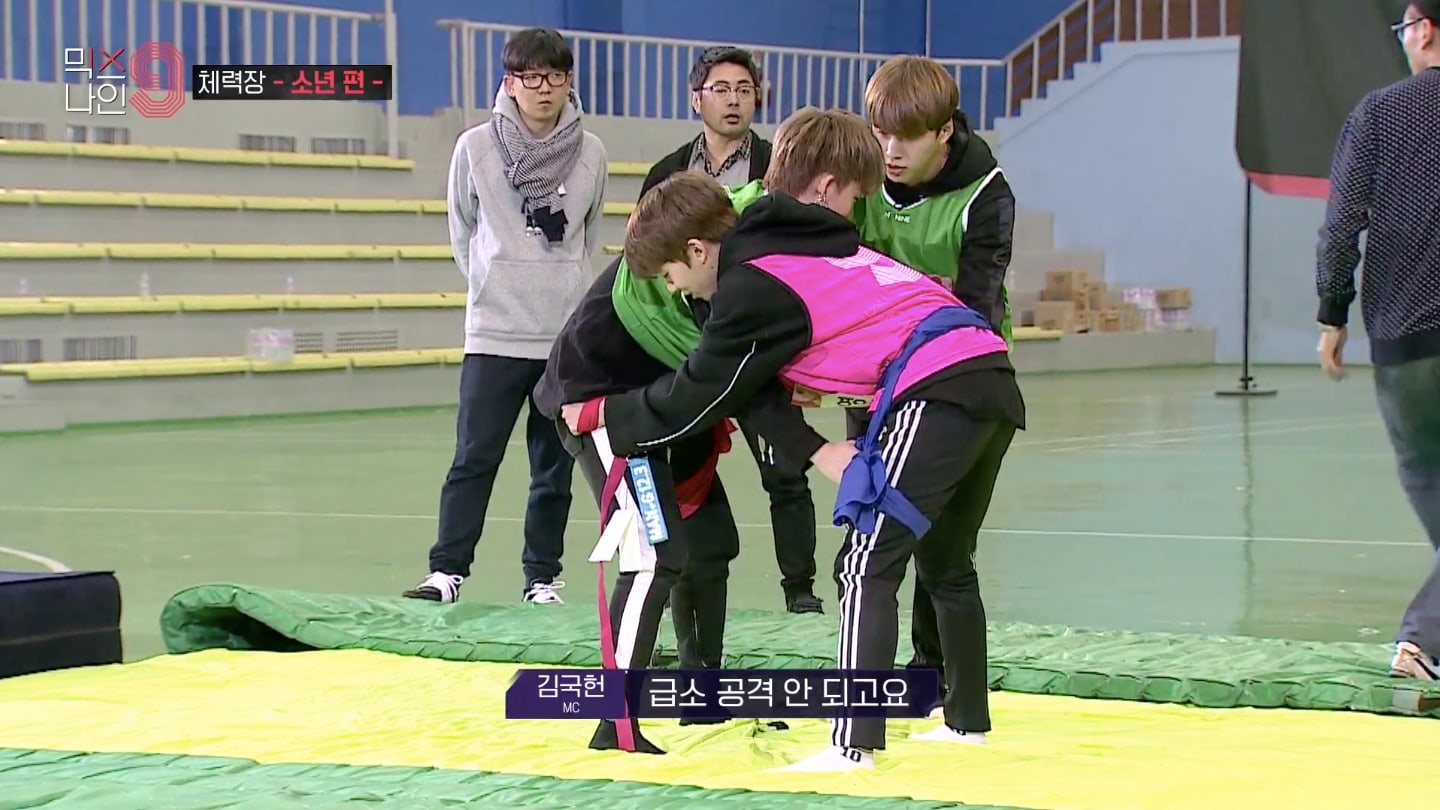 However, the match ended on a painful note when Woo Jin Young accidentally kicked Choi Hyun Suk in a sensitive area. 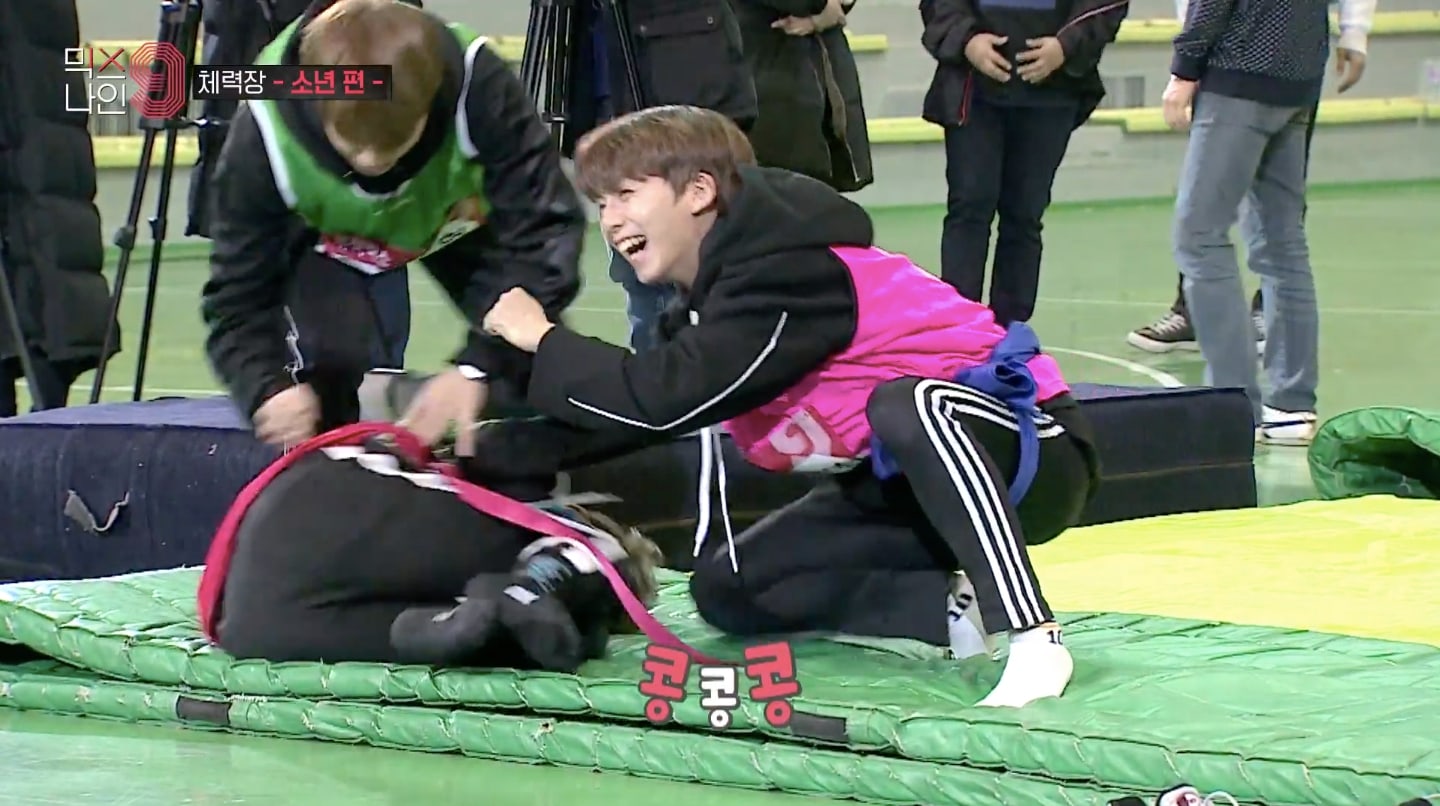 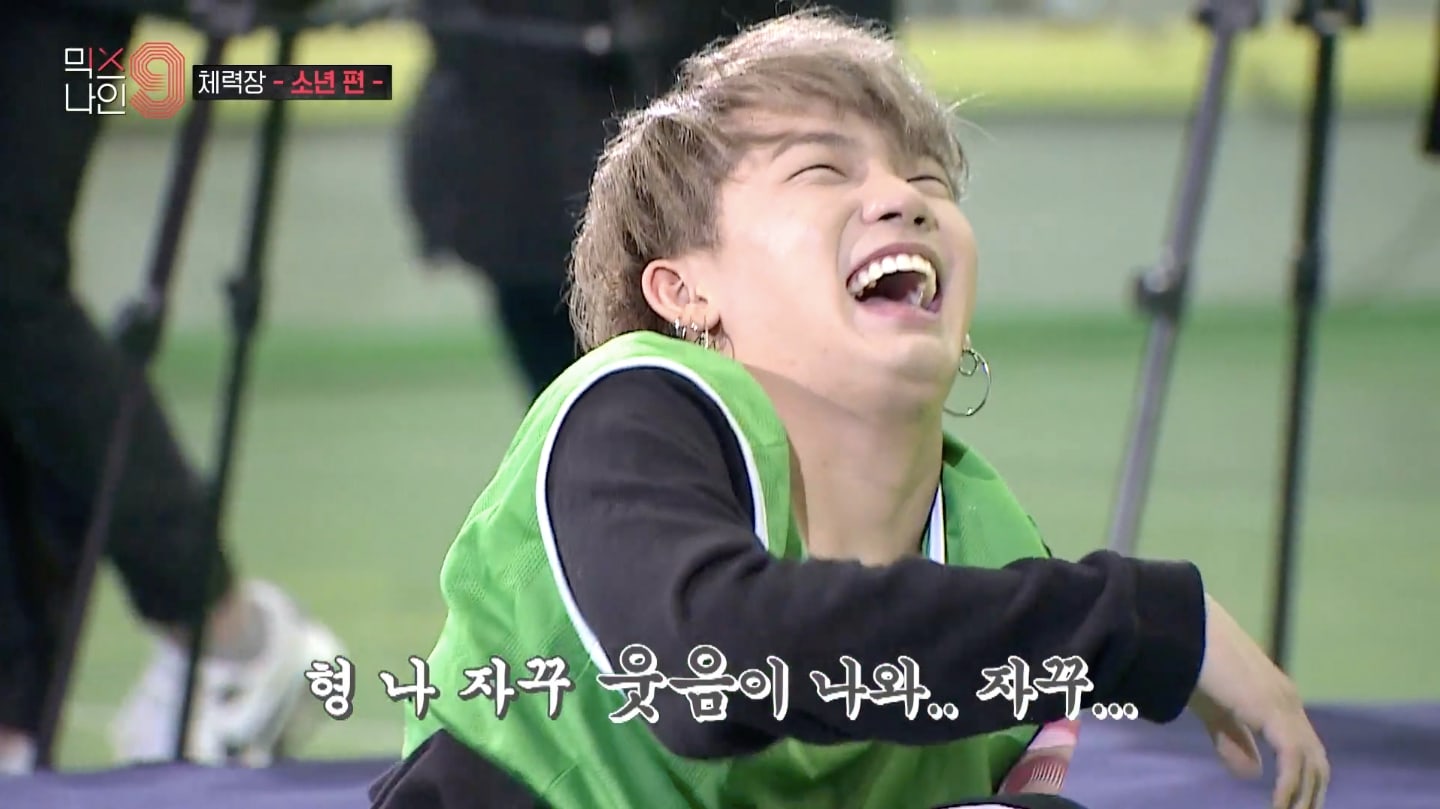 Oh Hee Jun made it to the semi-finals again, but was defeated by fellow KNK member Jeong In Seong (YNB Entertainment). 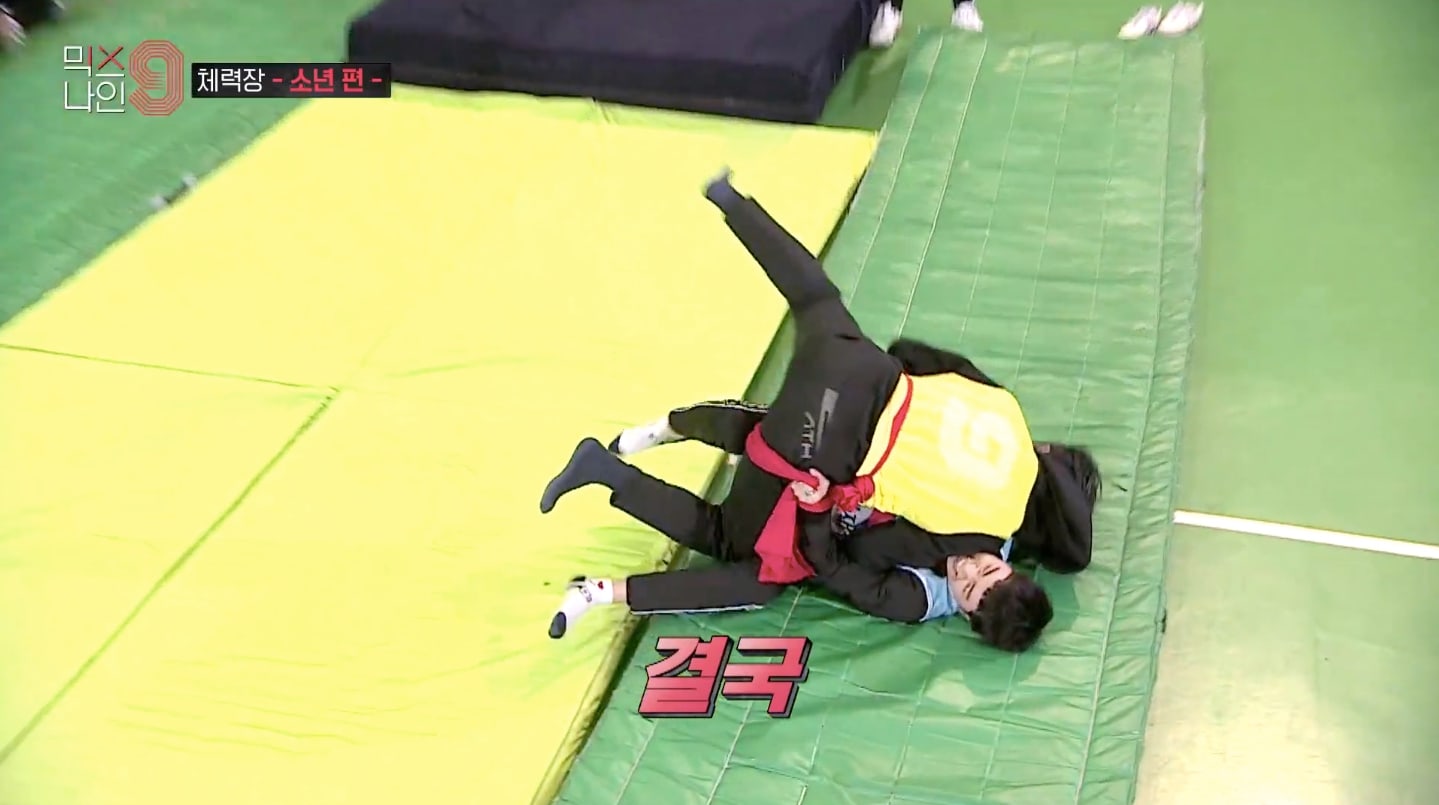 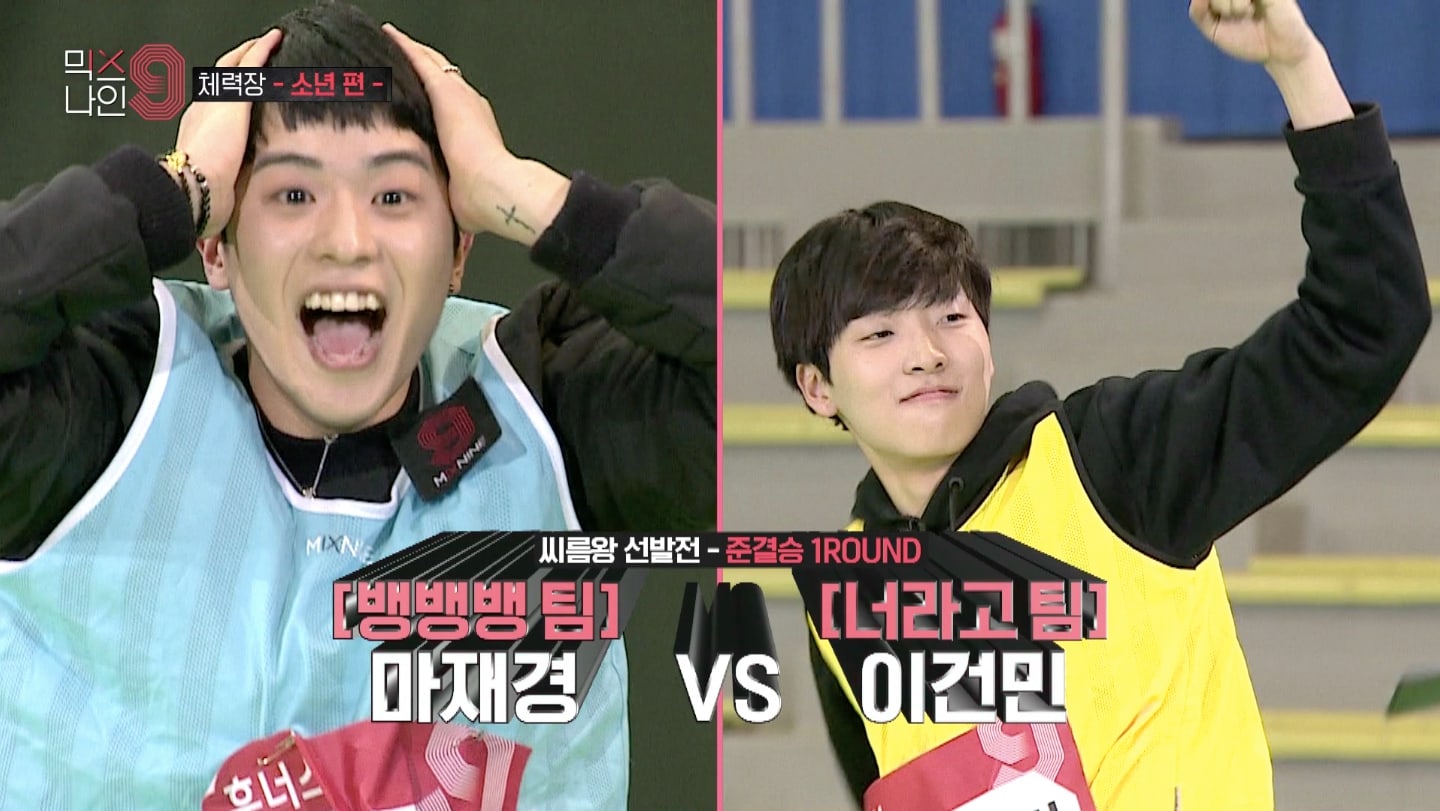 The final match was a close one, with both Jeong In Seong and Lee Gun Min struggling to gain the upper hand. In the end, Jeong In Seong emerged the final victor. 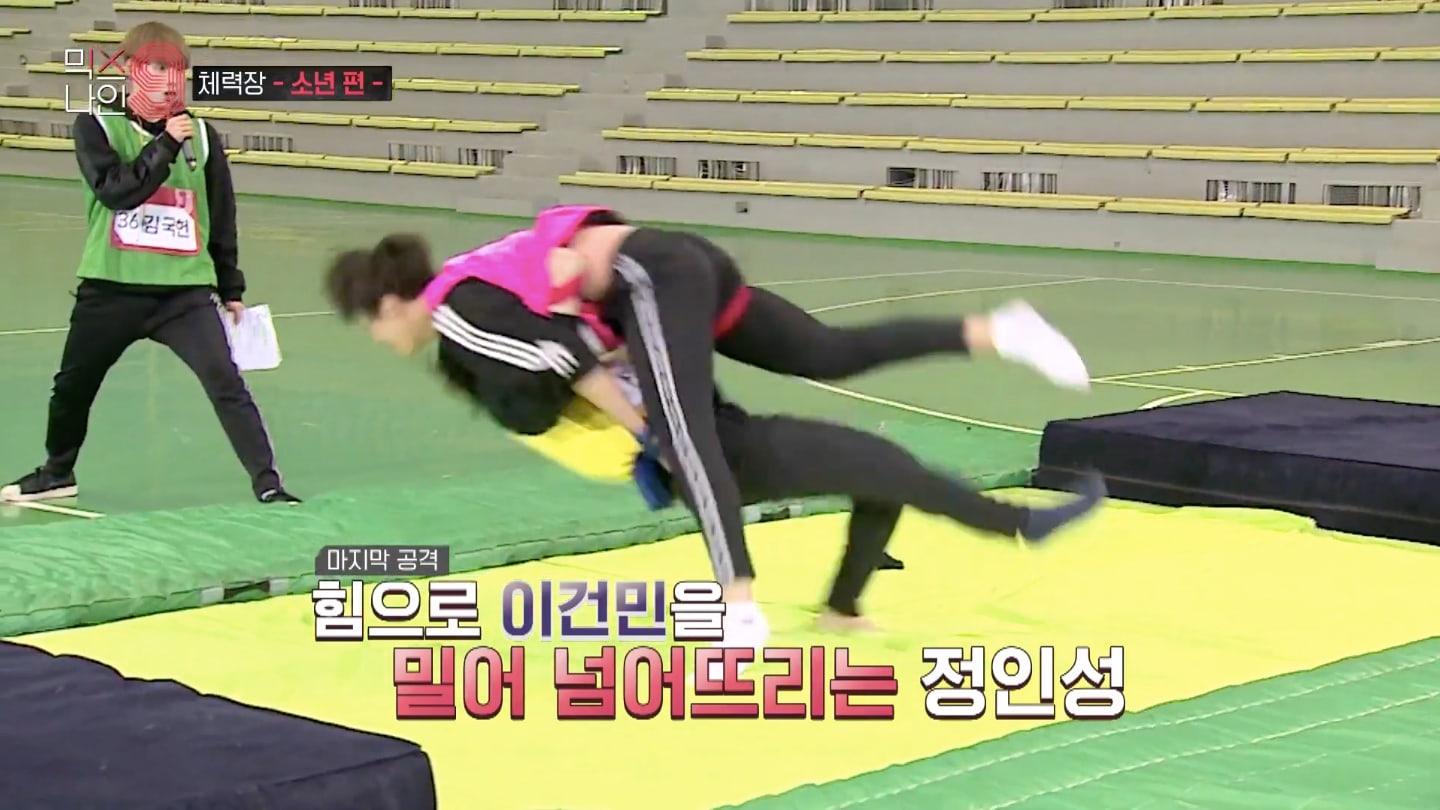 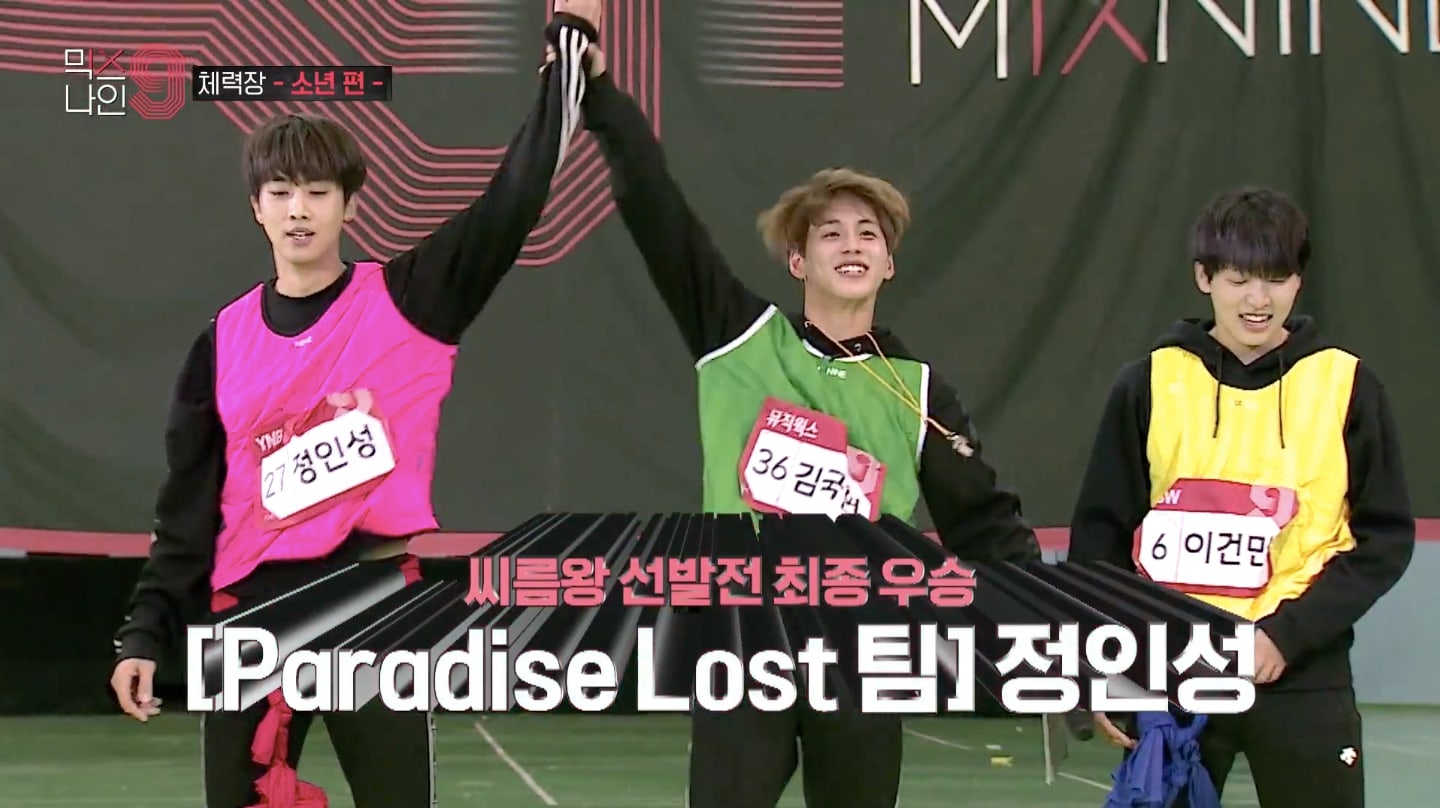 Jeong In Seong celebrated his victory by excitedly running up to the camera and declaring, “Mom! I won first place!” 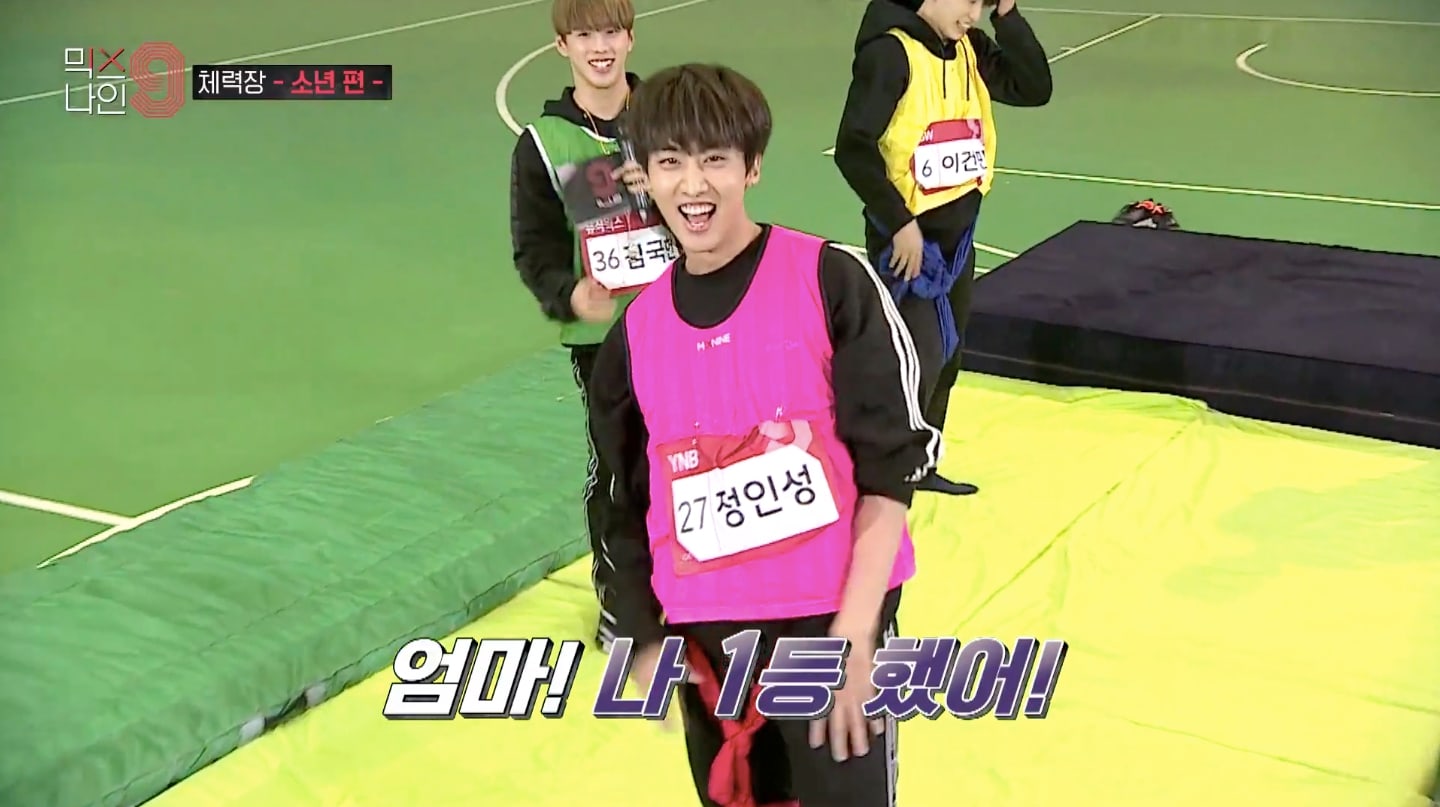 The final game tested the contestants’ flexibility, with each team lining up in a row and doing the splits to see which team could span the longest distance with their legs. 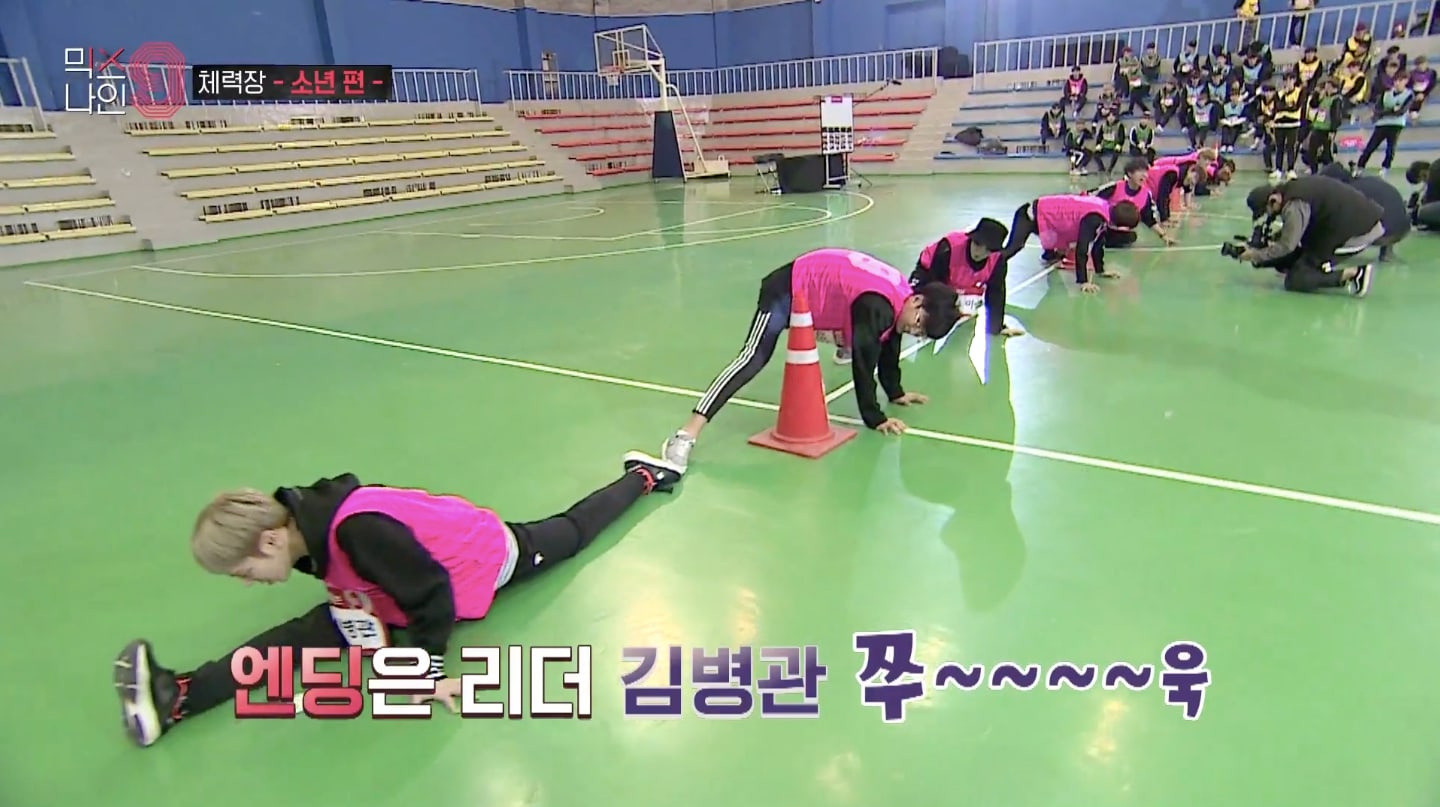 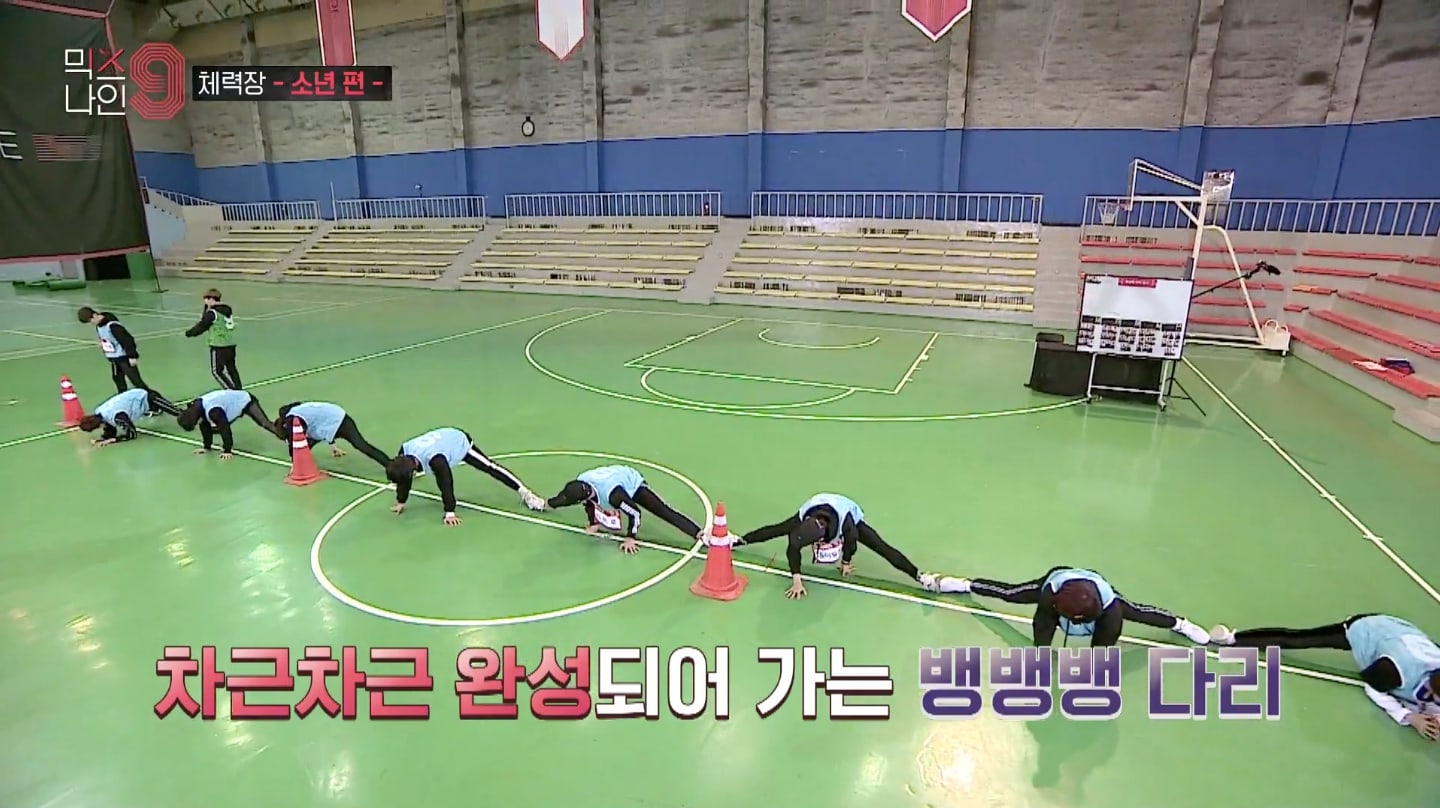 Some of the less flexible contestants were visibly in pain as they begged the MCs to take their measurements as quickly as possible. 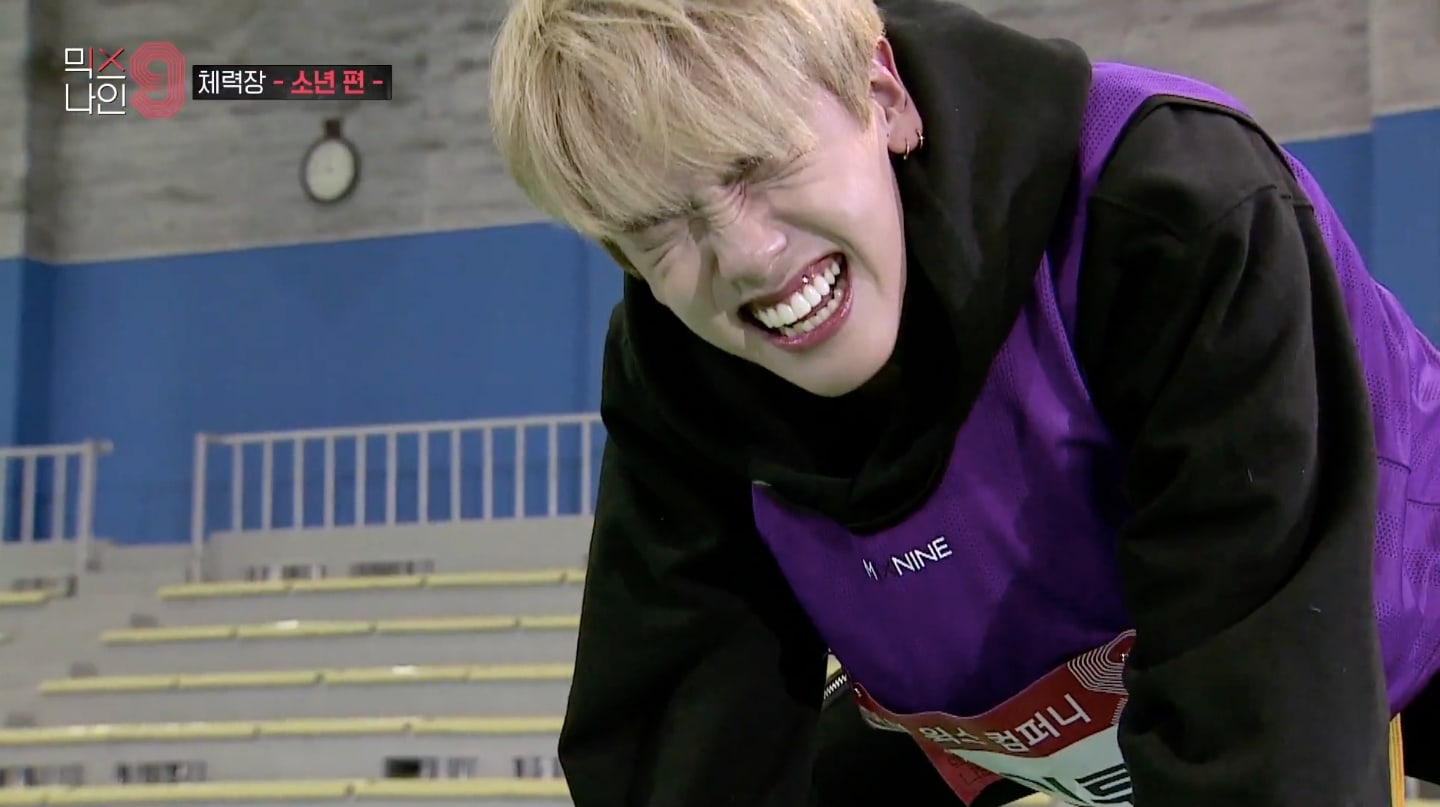 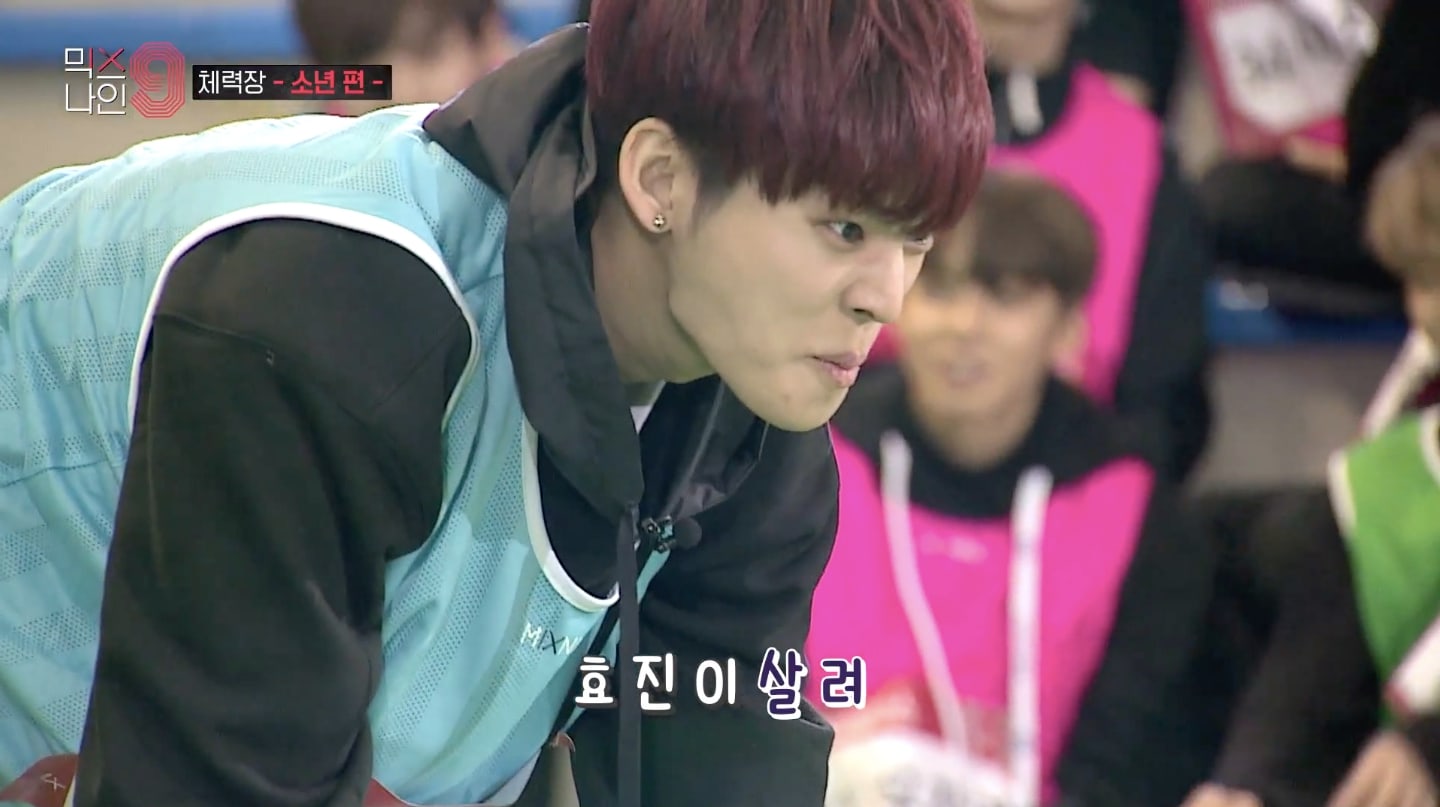 Ultimately, the “It’s You” team came out on top, beating the “Paradise Lost” team’s record by just 7 centimeters (less than 3 inches). 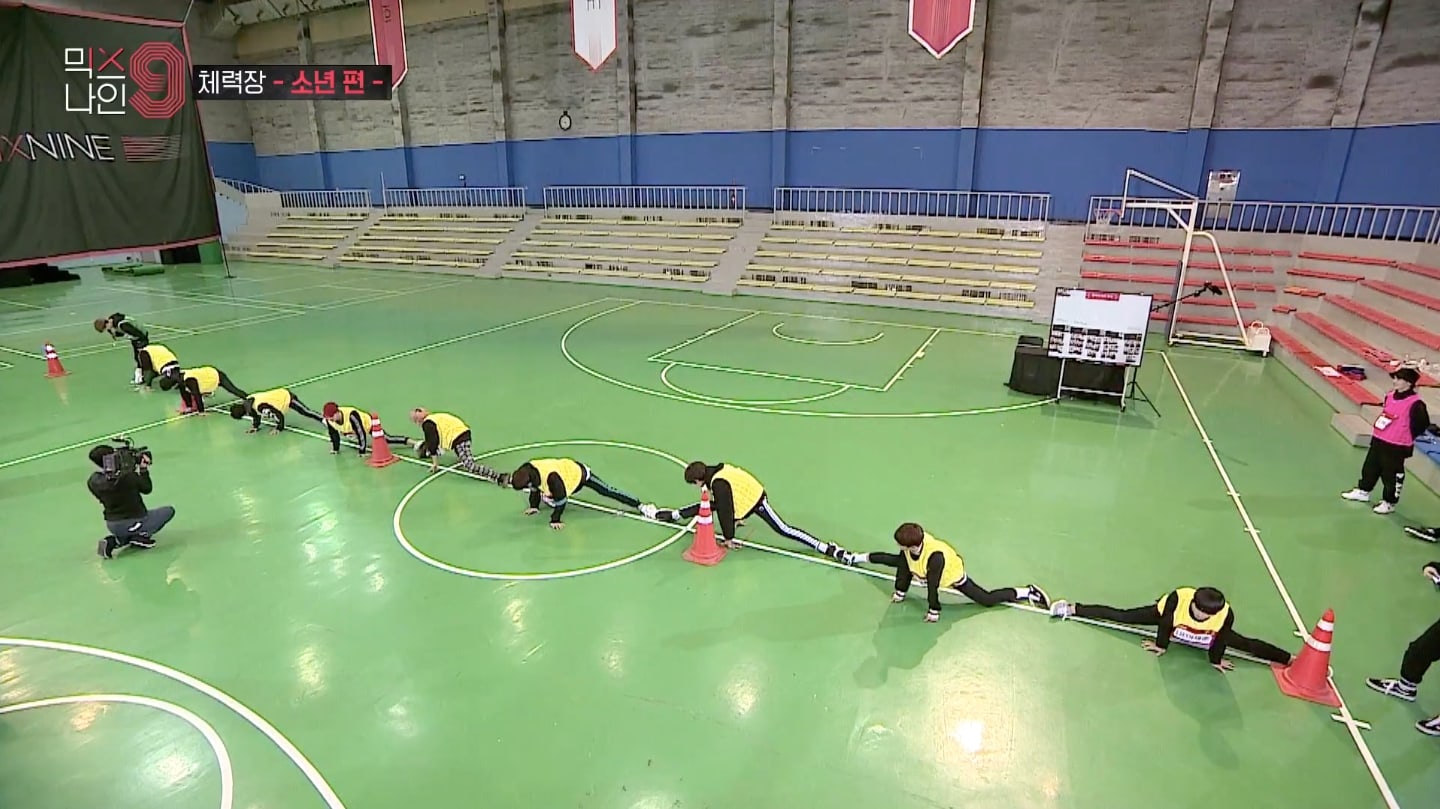 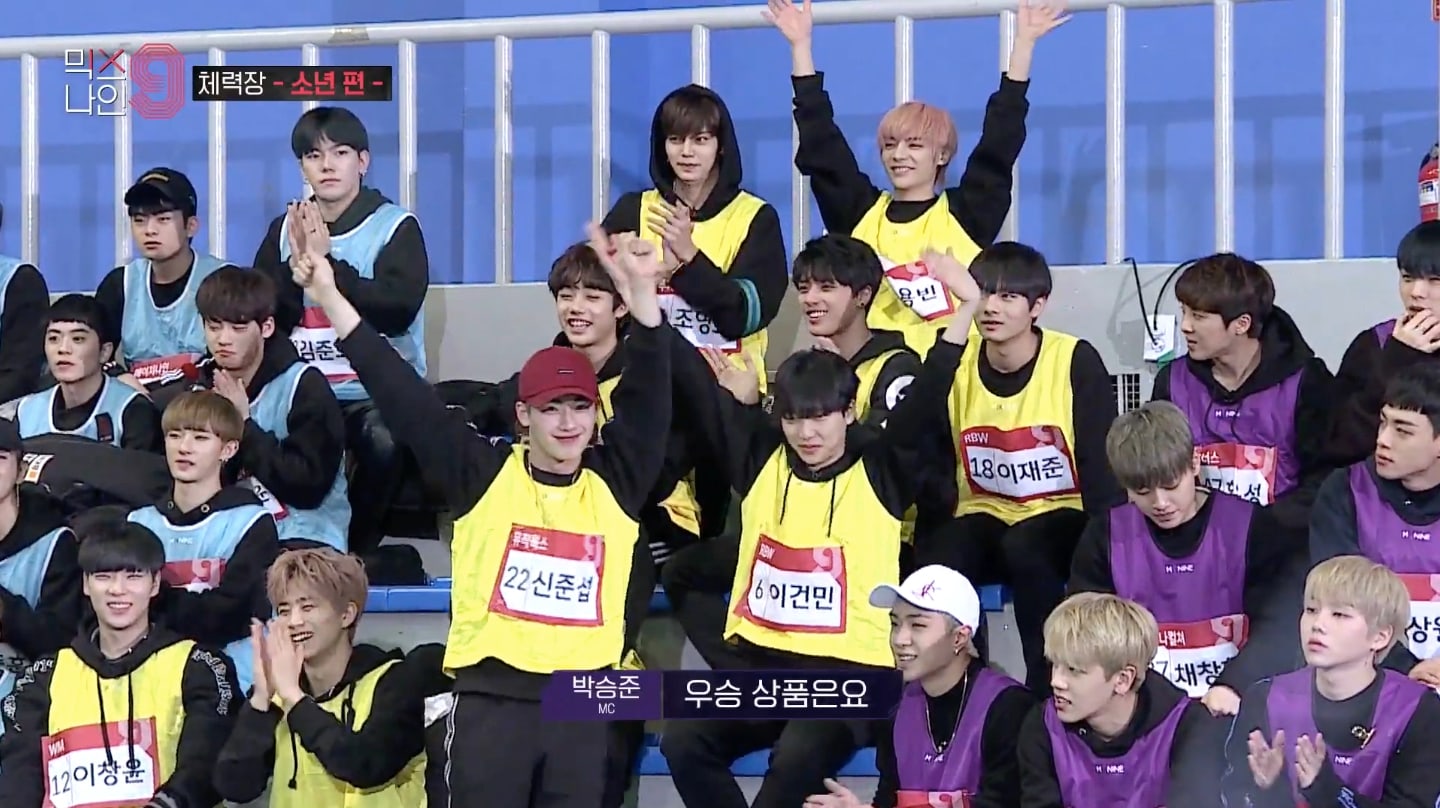 Check out the full video of the competition here!