Nam Joo Hyuk and EXO’s Sehun are such hardworking and positive-minded people!

The two stars featured in a teaser shown at the end of the February 8 episode of tvN’s “Coffee Friends.”

In the clip, they start the grueling but rewarding work at the cafe. Nam Joo Hyuk, who was invited by his labelmate Son Ho Jun, can be seen delivering bread and rice to the cafe but ending up grinding coffee beans and doing the dishes as soon as he puts the deliveries down.

Sehun, who was invited on the show by his close friend Yoo Yeon Seok, is shown in the teaser “bringing wind onto the island” as he enters the cafe. Different from previous employees, Sehun excitedly asks Yoo Yeon Seok, “Can I start now?” 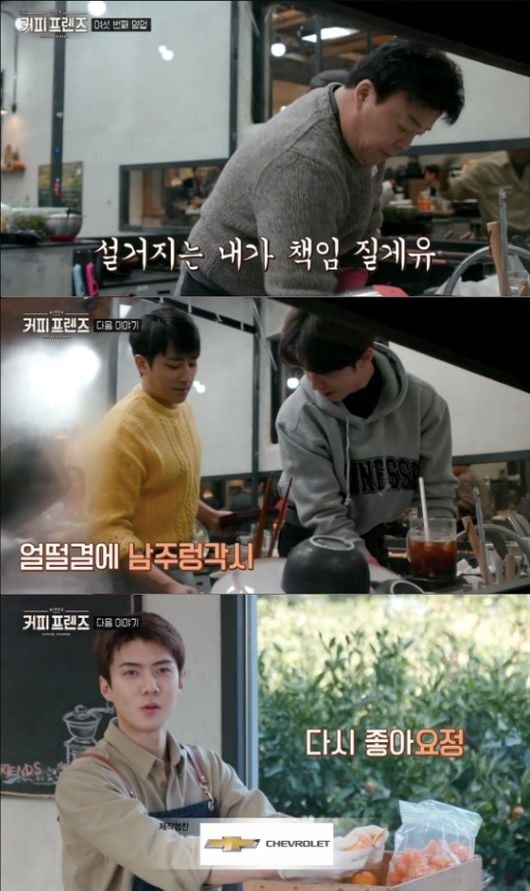 As seen in the teaser, Sehun earns himself the nickname “Like Fairy” because of how he responds with “I’d love to” to everything, whether he’s handed rubber gloves to do the dishes or told to peel tangerines. At one point, he strays a bit from his original “Like Fairy” ways as he sighs loudly and stares off into the distance, peeling endless oranges. Soon after, Sehun quickly gets back on his feet and becomes his normal positive self.

It has also been confirmed that Kang Daniel will also make an appearance on the show, as he visited Jeju Island to see his friend Sehun when he was working at the cafe.

Watch the whole teaser below!

Make sure to catch the next episode of “Coffee Friends,” which airs on Fridays at 9:10 p.m. KST.