On the episode of MBC every1’s “Weekly Idol” that aired on April 27, Jackson of GOT7 and Park Jin Young reveal some insights into their relationship at JYP Entertainment.

During the show, Jackson surprises Park Jin Young by running onto set while yelling to him, “My father!” The hosts ask Jackson why he’s come to visit the set, and Jackson says, “I just came. My father’s here, so I shouldn’t go somewhere else, you know.”

“Since he started doing that, the hierarchy is weird now because only Jackson and a few others in his age group call me hyung and the rest call me producer,” he adds.

“I also call Song Hae my hyung,” Jackson admits, referring to the veteran 89-year-old singer and television show host, which makes everyone burst out laughing.

Meanwhile Park Jin Young described Jackson, saying, “I think the most important character to have is passion, and he is filled with it. He’s very kind as well.”

When asked what he can learn from Park Jin Young, Jackson says, “Living a long life, being a good singer, and being able to dance for a long time.” 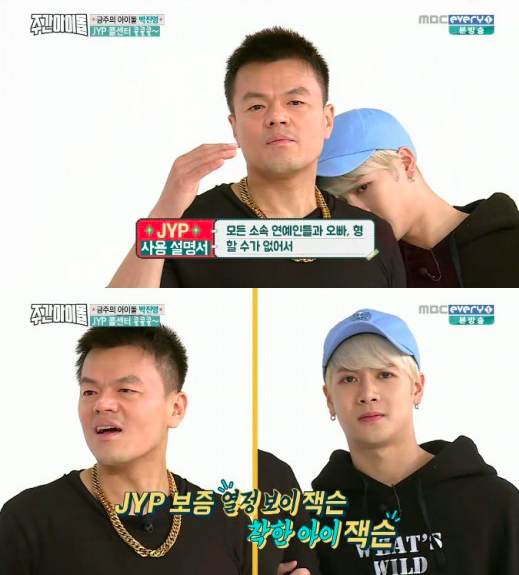 Watch Jackson’s surprise visit in the clip below!