Look at his face!

On the April 1 episode of KBS‘s “Music Bank,” Red Velvet‘s Irene played a prank on Park Bo Gum during the live broadcast. During one of their emcee segments while Park Bo Gum is talking, Irene suddenly drops to the floor, making noises like she is in pain. Park Bo Gum holds her shoulder, trying to continue his segment but stuttering and showing signs of confusion and nervousness. Irene slowly gets up, and lifting her head, she laughs, saying, “It’s a joke!” She explains, “Today is April Fools’ and I think there will be many people playing cute pranks like me, but remember not to play harmful pranks.” As Irene giggles, Park Bo Gum’s face is frozen with a stunned expression. Irene apologizes and continues with the emcee segment. 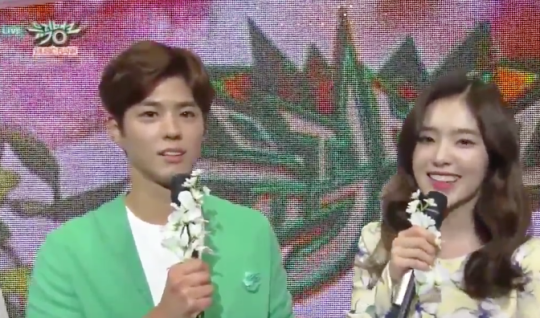 Watch the cute prank in the video below!

In case one video gets taken down:

Meanwhile, GOT7 took their third win for “Fly” in this episode. Watch their win and all artists’ performances here.