Watch: SHINee’s Key Hilariously Fails To Guess Celebrity Based On His Eyes, Nose, And Lips

SHINee’s Key failed to recognize his labelmate in a puzzle game where you have to guess the celebrity based on just the eyes, nose, and lips.

During the April 28 episode of tvN’s “Amazing Saturday,” a photo of someone’s eyes, nose, and lips was revealed, and right away, Key guessed that they belonged to actor Jung Hae In. He was correct, stunning the rest of the cast, but they immediately teased him because this was just a practice game, and his correct guess didn’t count.

The game officially started after that, but no one, not even Key, was able to guess who the celebrity was. Key asked out loud in befuddlement, “Who is that?” The cast wondered if it was B1A4’s Sandeul or actress Kim Go Eun, but none of them were right. Key guessed, “[B1A4’s] Jinyoung? [Wanna One’s] Min Hyun? [Infinite’s] Dongwoo?” The guesses were incorrect though, and he kept asking, “Who on earth is it?”

Eventually, the Boom gave a crucial hint: the celebrity is in the same agency as Key. The hint wasn’t helpful at all though, and it just put Key in panic mode. In the end, Key couldn’t figure out his labelmate, and it turned out that the eyes, lips, and nose actually belonged to none other than TVXQ’s Yunho! 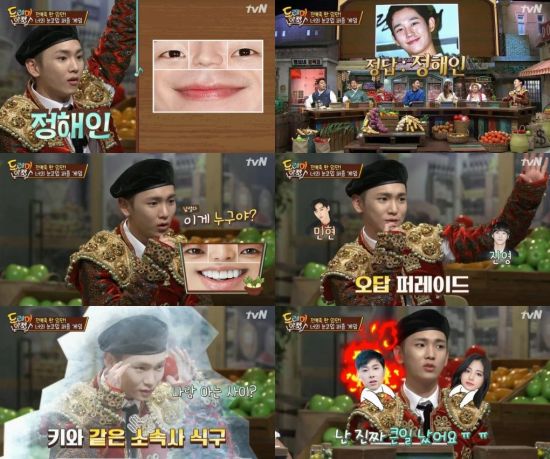 The game continued, and the eyes, lips, and nose of a woman were shown. Park Na Rae guessed they belonged to Suzy, which was wrong. Girls’ Day Hyeri answered Park Na Rae, and she was right, throwing Park Na Rae off guard because she couldn’t even recognize herself!

Watch the hilarious guessing game below!