Take a ride in an elevator with Song Joong Ki in this video and experience for yourself the fangirl madness he sparks wherever he goes!

On March 30, Song Joong Ki appeared as a guest on KBS 1TV’s “News9” as the first ever celebrity to appear in person on the renowned news broadcast.

KBS World has now shared a 360 degree video of Song Joong Ki arriving at the KBS building for his interview! The video begins with Song Joong Ki being escorted from a parking lot into an elevator, and you can hear some yelling in the background as the first staff members grab a surprise glimpse of the top star.

In the elevator, Song Joong Ki comments that he thinks it’s his first time there, and a staff member explains that they’re going to the news department and that they’ll be getting off at the third floor.

However, the doors open at the second floor, and screams erupt as women standing outside the elevator see Song Joong Ki inside!

Song Joong Ki bows to them, and then smiles with the staff at their reaction. The director of the network’s variety department says to Song Joong Ki, “I’m enjoying watching it,” referring to his hit drama “Descendants of the Sun.” Song Joong Ki thanks him and says with a laugh, “I am too.”

Experience the elevator ride for yourself in the video!

KBS’s “Entertainment Weekly” also recently shared a clip of Song Joong Ki arriving that day, which showed some of the staff lining up along a hallway to take photos and catch a peek of the star. 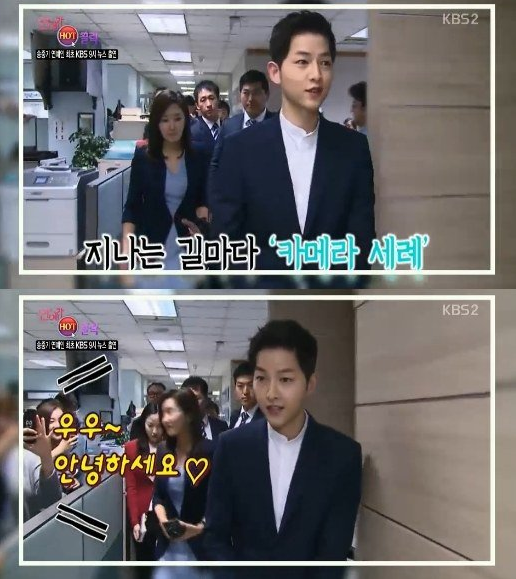 Be sure to watch Song Joong Ki in “Descendants of the Sun,” starting with the first episode below.