The three groups were told by host Defconn that the crew would play a series of songs, and anyone who recognized the tracks should come to the center and do their best version of the dance moves. Defconn clarified that the winner wouldn’t be the person who did the dance the best, but rather the person who managed to make the hosts’ hearts race.

The first track was Apink’s “Mr. Chu,” and the guys of VICTON eagerly got up to perform their label mate’s song, with Byungchan, Chan, and Hanse dancing as their impromptu representatives and all the members of MOMOLAND giving it a shot as well. 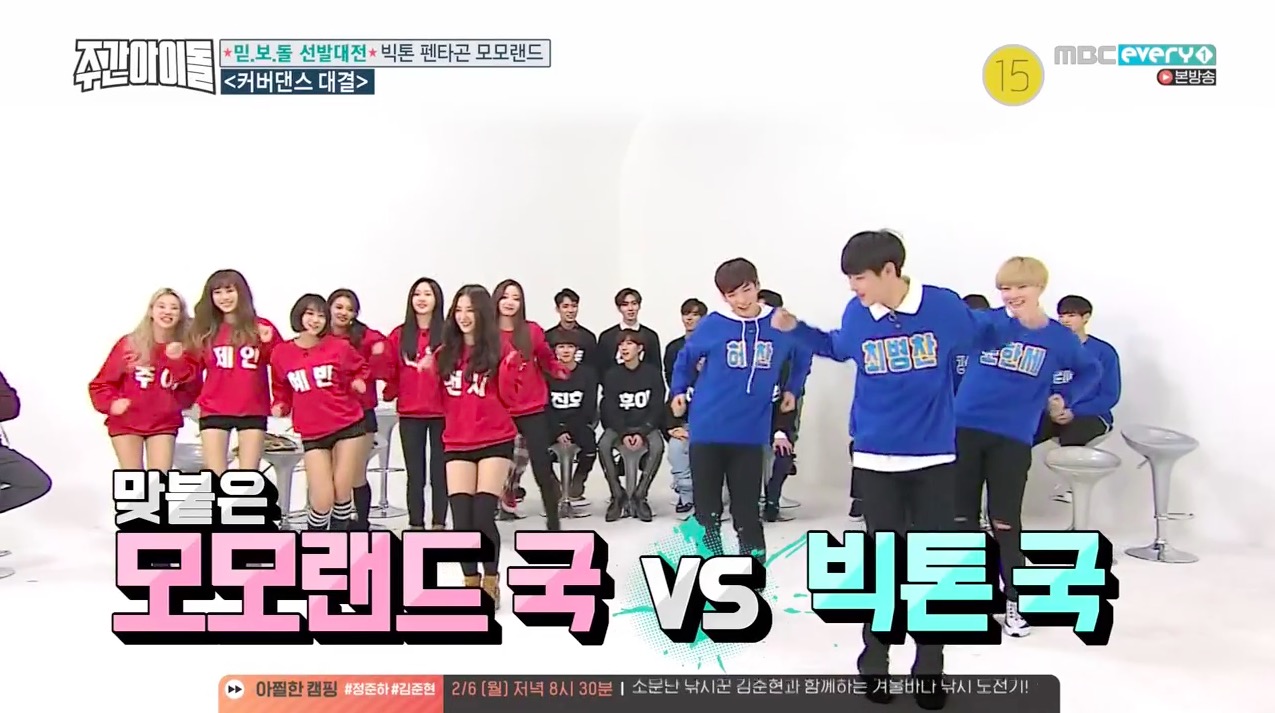 After “Mr. Chu,” Byungchan barely even had a chance to sit down before BLACKPINK’s “BOOMBAYAH” came on and he excitedly ran back to the center as his group mates yelled like his own set of personal cheerleaders and the hosts looked impressed. 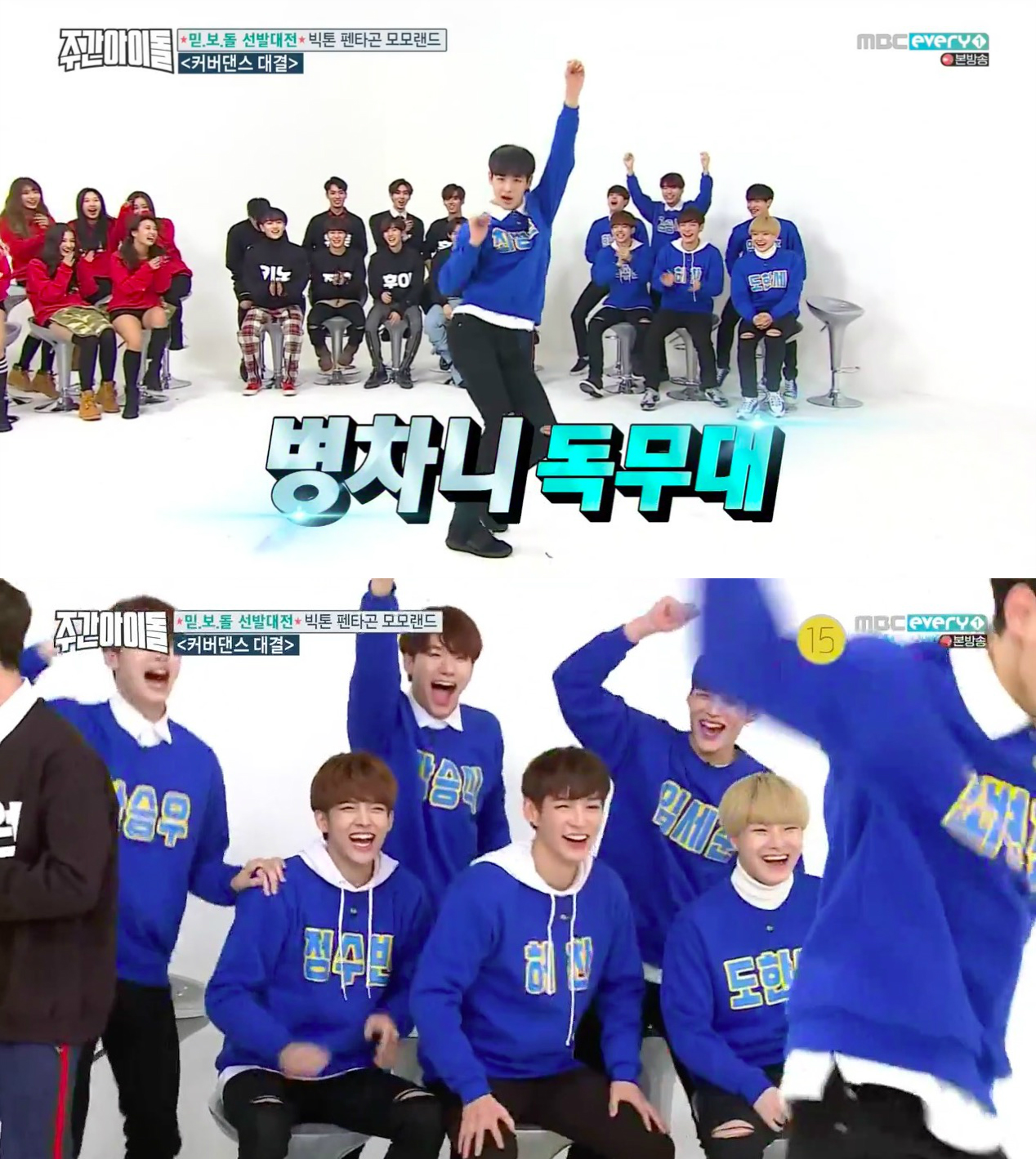 TWICE’s “TT” brought out a crowd of idols to dance to the hit, with Byungchan ending up at the front going head-to-head in a spontaneous match-up with PENTAGON’s Kino. After the track, both the guys headed back to their places only to run right back to perform when I.O.I’s “Very Very Very” came on, and their hilariously perfect version of the moves wrapped up the round. 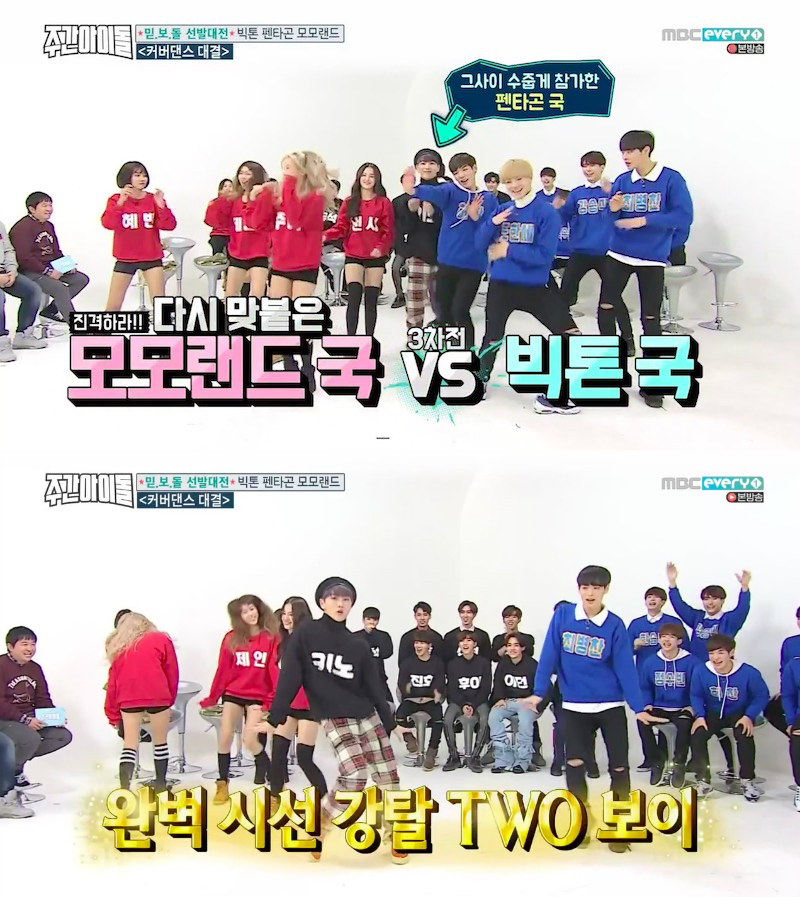 After the music ended, Defconn stood up and asked, “Byungchan, did you prepare to debut in a girl group?” Jung Hyung Don joked that he hadn’t had something make his heart race as much as Byungchan’s performance since the “sexy dancing” of Sungyeol from INFINITE, which was back in 2013. 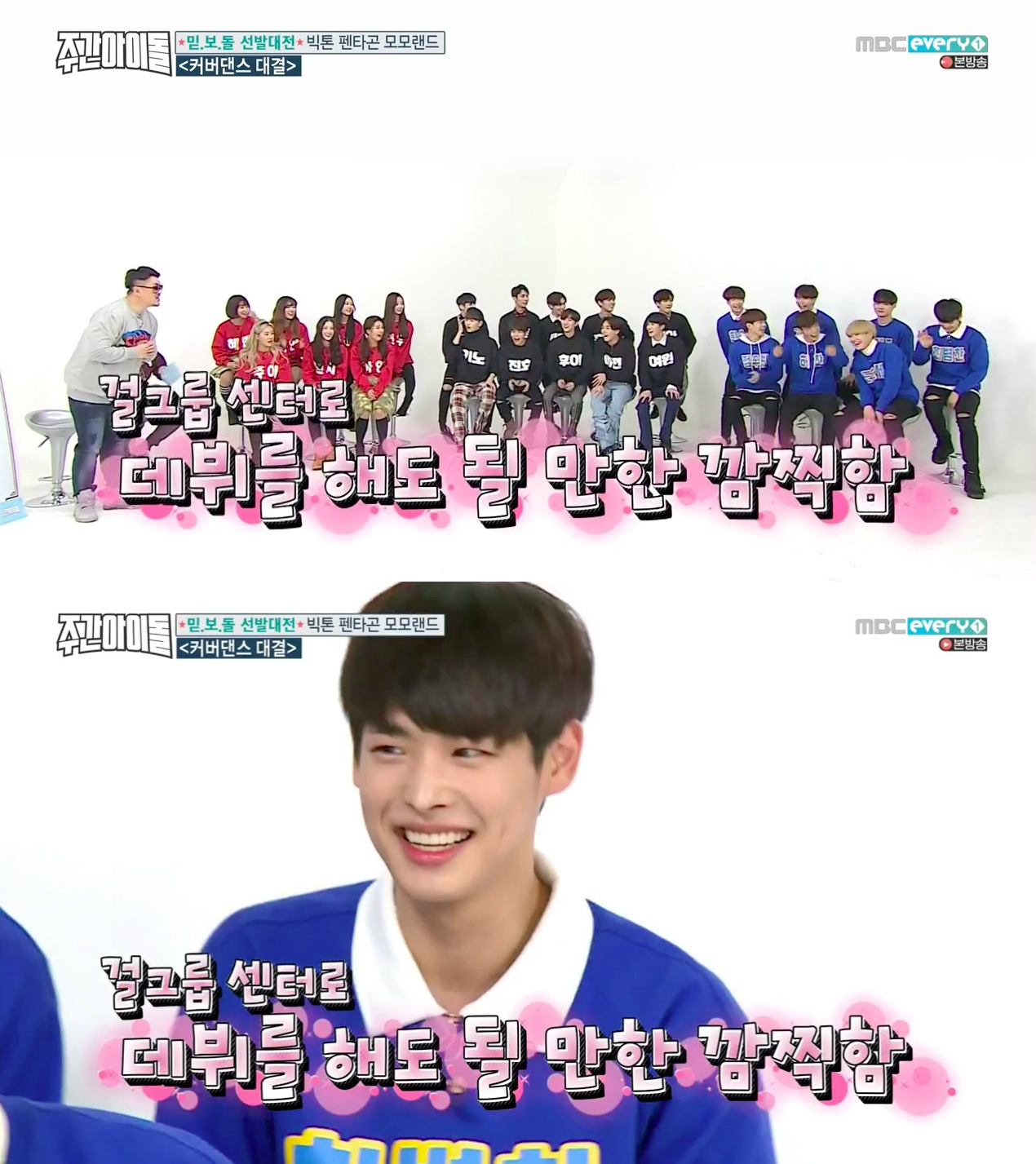 The hosts then suggested another round of the competition featuring one member of each group. VICTON and PENTAGON of course chose their M.V.Ps of the game Byungchan and Kino, with MOMOLAND sending out Jane to represent them.

The first track in this round was EXO’s “Monster,” with Byungchan being the only competitor who didn’t hesitate before beginning to dance along. BTS’s “Blood, Sweat & Tears” got all three of them dancing, and Byungchan and Jane’s enthusiastic performances of “Pick Me” from “Produce 101” had everyone cheering! 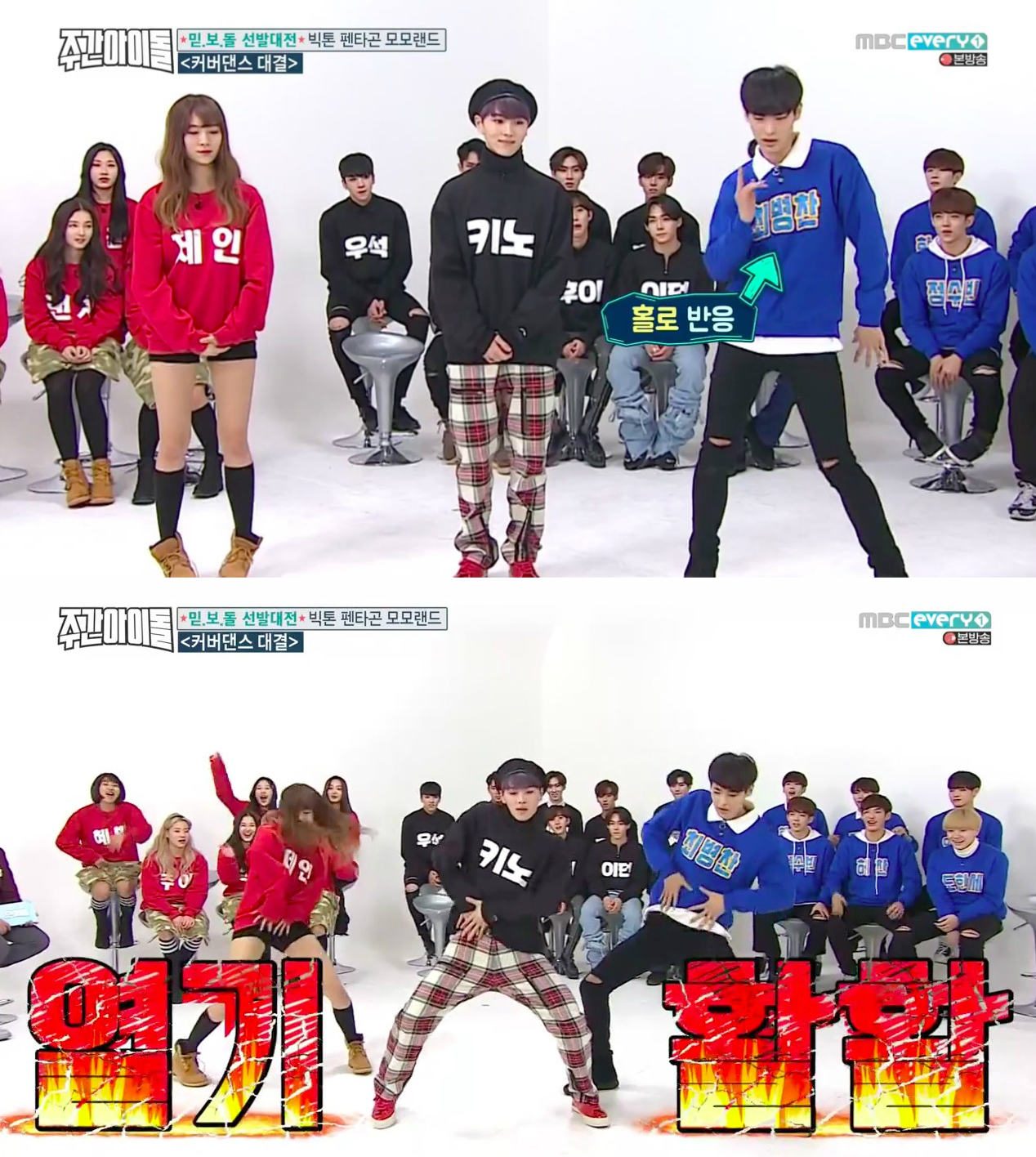 In the end, Defconn joked that he wasn’t able to keep his eyes off Byungchan. The hosts explained that since there were a lot of songs that PENTAGON hadn’t known, they would give the win to both VICTON and MOMOLAND. 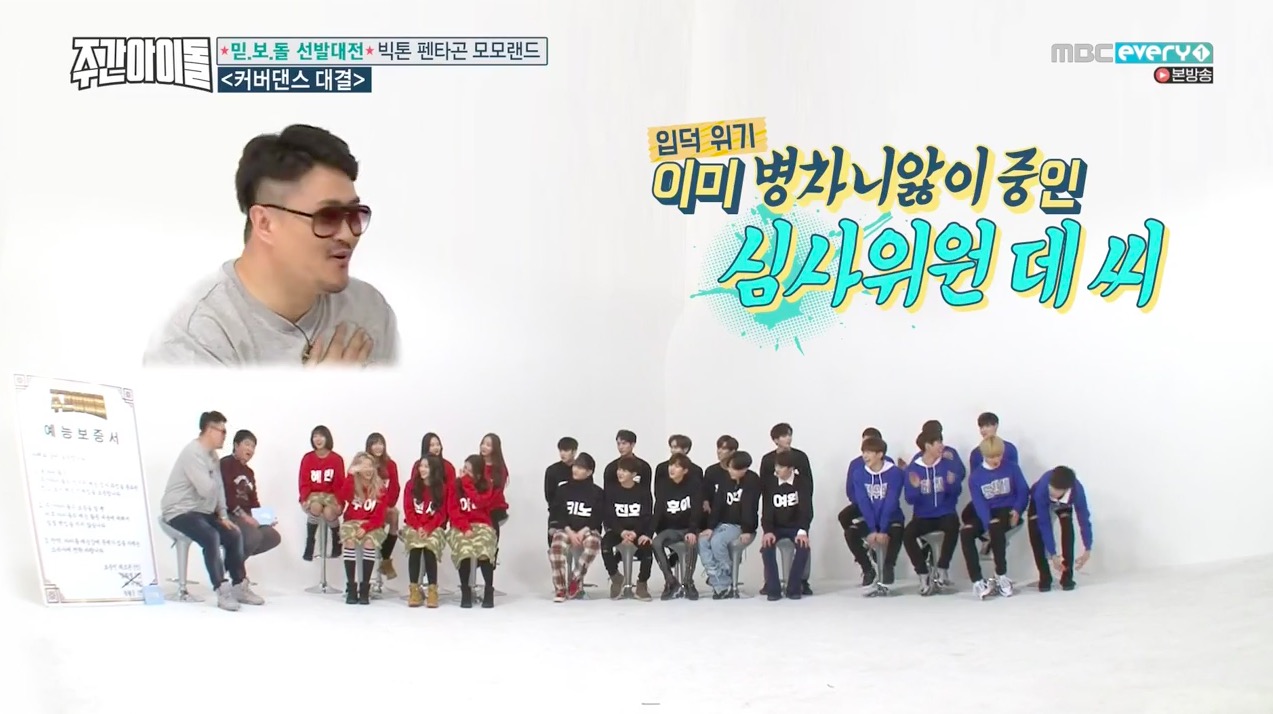 Watch a clip from the epic dance-off below!