Watch: WINNER, DinDin, And K.Will Put Their Own Twist On Classic Hits On “Sugar Man 2”

WINNER, DinDin, and K.Will were the latest singers to appear on JTBC’s “Sugar Man 2”!

The singers appeared as guests on the May 6 episode of the variety show, which features currently popular singers performing remixes of classic hits by singers from the past. The show also gives viewers a chance to find out what the singers of the legendary hits have been up to after disappearing from the spotlight.

When introducing the first “Sugar Man,” MC Yoo Hee Yeol said, “He’s a singer who was way before his time.” Singer Jung Joon Young described the singer by saying, “I really respected and admired this ‘Sugar Man’ when I was young.”

The first “Sugar Man” was then revealed to be Kim Ba Da, the vocalist of the band Butterfly Effect. Fans said that they fell in love with his voice, with many of them following the singer when he left his first band Sinawe and later formed Butterfly Effect.

Kim Ba Da introduced himself by saying, “My real name is Kim Jung Nam. I earned the nickname of the people’s rocker.” WINNER’s Lee Seung Hoon commented, “These days, [singers] sing love songs in order to be relatable to the public, but I like that the songs back then were free-spirited.”

Kim Ba Da sang “Turning the Radio on Loudly” (literal title) from his days as a Sinawe member, before revealing why he began to sing ballads after leaving the band. Referring to the early days of the band Butterfly Effect, he explained, “I first sang soft songs to gain public recognition.” 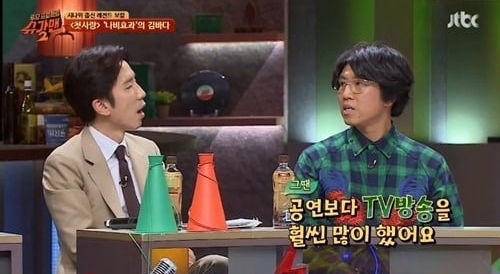 Yoo Jae Suk then introduced his “Sugar Man” for the week as someone who “surprised the public with shocking and unconventional lyrics.” Actress Kim Soo Mi hinted at the singer’s identity by saying, “The song title was refreshing! I’m curious about what he’s been up to these days.”

The second “Sugar Man” turned out to be EZ-Life member Lee Sang Baek and DK4RG. They sang their hit song “Not You But Your Older Sister” (literal title), before talking about their lives after their singing careers. Lee Sang Baek said, “I’ve been grilling meat for seven years as a [restaurant] employee,” and DK4RG revealed, “I’m running a small business in Ho Chi Minh City.”

DK4RG explained that their album sales dropped after they appeared on TV, because Lee Sang Baek’s vocals and image didn’t match. Lee Sang Baek also shared that the reason for his hiatus was because his agency didn’t offer to renew his contract. 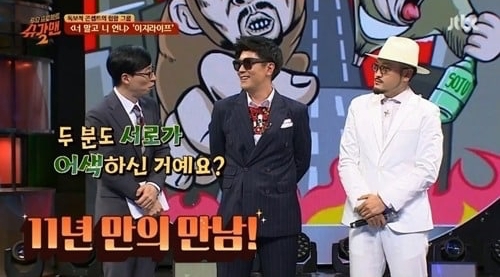 After catching up with the original singers, WINNER, K.Will, and DinDin proceeded to show off their own renditions of the popular hits.

WINNER performed their new version of Kim Ba Da’s “First Love,” which they transformed by adding trendier sounds and rap.

Meanwhile, K.Will and DinDin teamed up to perform a 2018 version of EZ Life’s “Not You But Your Older Sister.” The chemistry between K.Will’s vocals and DinDin’s rap gave the song a completely new vibe.