JTBC drama “Ping Pong Ball” (literal title) has released photos from its script reading and a teaser of its two leads.

“Ping Pong Ball” is a story about a college student and a homeless man who relate to one another while talking about unrequited love and the feelings of confusion and truth. It’s a drama with a unique format and is based on a webtoon by Jo Geum San who also wrote the webtoons “Save Me” and “Out to the World” (literal title).

Yoo Jae Myung portrays a homeless man named Kim Deuk Hwan who lives by a small stream near an apartment building. Ji Soo appears as a college student named Kim Young Joon who majors in philosophy and is emotionally repressed. The pair are reuniting after they both appeared in JTBC’s “Strong Woman Do Bong Soon” a year ago.

On August 8, the cast and crew gathered for a script reading at JTBC. Yoo Jae Myung transformed into his character for “Ping Pong Ball” right after wrapping up filming for JTBC’s “Life.” He perfectly portrayed Kim Deuk Hwan’s dark humor and unique personality.

Ji Soo also successfully expressed the pedantic personality and unique inner world of Kim Joon Young. His character is timid, awkward at love, likes philosophical stories, and is a bit different from an average guy in his 20s.

Along with the two leads, director Kim Sang Ho, writer Park Ji Won, Choi Kwang Il, Lee Ha Yul, Seo Dong Gab, and Jung Young Ki were in attendance. The director said, “I’m happy that I met good actors and a good project. I’ll work hard to make filming fun and to convey the emotions from the original work in the drama.” 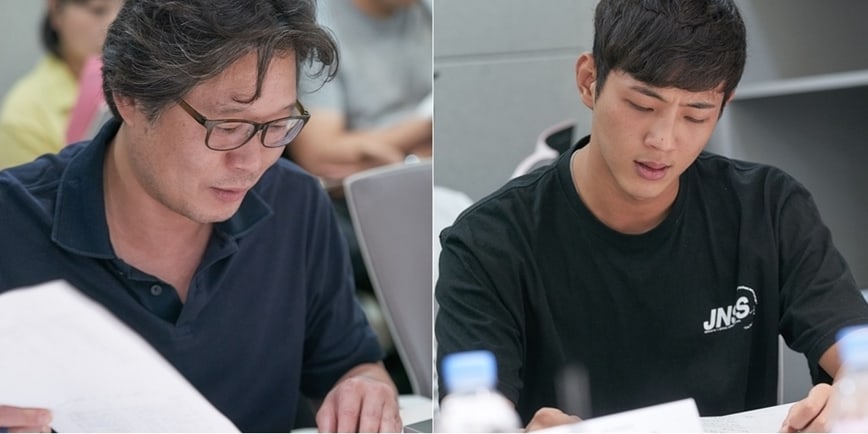 A teaser has also been released for “Ping Pong Ball.” The video begins with Yoo Jae Myung and Ji Soo sitting on a bench facing a playground.

Yoo Jae Myung asks, “You’re completely done with that girlfriend?” Ji Soo replies, “It’s probably over,” and Yoo Jae Myung says, “I may already be over too.”

Ji Soo reassures him by saying, “It’s not over for you yet.” When Yoo Jae Myung asks, “How do you know?” Ji Soo answers, “I can just feel it. You said that you can easily figure out other people’s problems.”

“Ping Pong Ball” will premiere on September 17 at 11 p.m. KST. Check out the teaser below!