The newly released photos show Park Seo Joon, Park Min Young, and Lee Tae Hwan hard at work as they prepare to film Episode 10 of the romantic comedy. One photo captures the three actors deep in discussion as they carefully go over the script, while another pictures Park Seo Joon and Park Min Young looking serious as they run their lines during rehearsal.

The producers of “What’s Wrong with Secretary Kim” remarked, “The driving force that enables the drama to break its own viewership ratings record with each new week is the perfect teamwork between the cast and crew. In particular, director Park Joon Hwa’s comfortable directing style and the actors’ appealing performances have joined together to create a wonderful synergy. We ask that you continue to show the drama lots of love.” 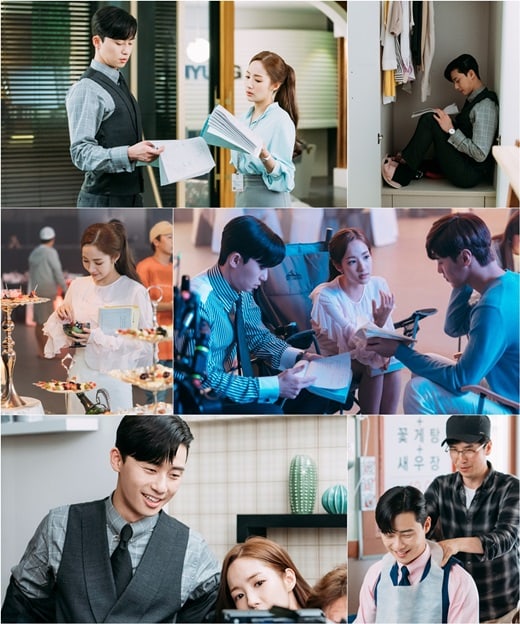 “What’s Wrong with Secretary Kim” airs on Wednesdays and Thursdays at 9:30 p.m KST.

If you haven’t already started watching it, check out the first episode of the drama below! Viki is also offering a 40 percent off sale for early access and ad-free HD viewing of “What’s Wrong with Secretary Kim.” You can learn more here.