Will BTS Debut At No. 1 On Billboard 200? It’s Possible, Say Industry Forecasters

With BTS’s latest achievements, they may have a shot at debuting at the top of the Billboard 200.

According to Billboard, BTS’s new album “Love Yourself: Tear” has the potential to sell over “100,000 equivalent album units earned in the week ending May 24.”

Currently, for the week of May 19, artists such as Post Malone, J. Cole, Leon Bridges, and Cardi B take up the top four spots on the Billboard 200 chart. American rapper Post Malone has been sitting at the top for three weeks in a row with his second studio album, “Beerbongs & Bentleys,” and could very well continue to keep it for another week. 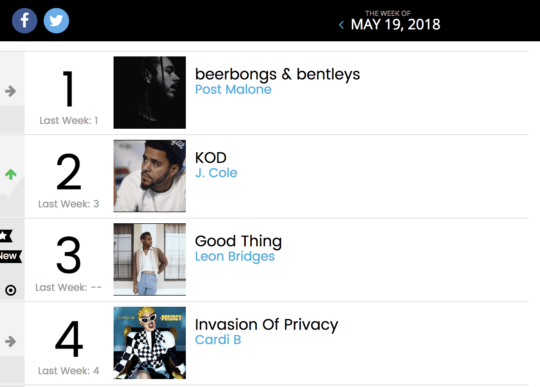 However, with the performance from BTS at the Billboard Music Awards 2018 (BBMAs) receiving much attention, Billboard suggests that BTS may have a chance at overtaking Post Malone. This is not the first time that BTS has made an entry into the Billboard 200, as their previous album “Love Yourself: Her” made it to No. 7 on the chart.

At the BBMAs, BTS recently won the Top Social Artist award for the second year in a row and also performed their title track “Fake Love,” becoming the first K-pop group to perform at the awards show.