WINNER is achieving great success both internationally and in Korea with their latest release!

On April 4, the group returned with their new single album entitled “FATE NUMBER FOR,” which features the tracks “Really Really” and “Fool.”

Only a few hours later, YG Entertainment founder Yang Hyun Suk shared a screenshot on his Instagram of the single album’s listings on worldwide iTunes charts, which showed it at No. 1 in 18 countries.

That wasn’t the peak for the album so far, though! The single has gone on to take No. 1 on a whopping 21 album charts as of 11:26 p.m. KST, topping the album chart in Brunei Darussalam, Colombia, Finland, Greece, Guatemala, Hong Kong, Indonesia, Kazakhstan, Luxembourg, Macau, Malaysia, Mexico, Norway, Philippines, Portugal, Singapore, Sweden, Taiwan, Thailand, Turkey, and Vietnam. It has also grabbed the No. 4 spot in Canada, and No. 10 in the United States. 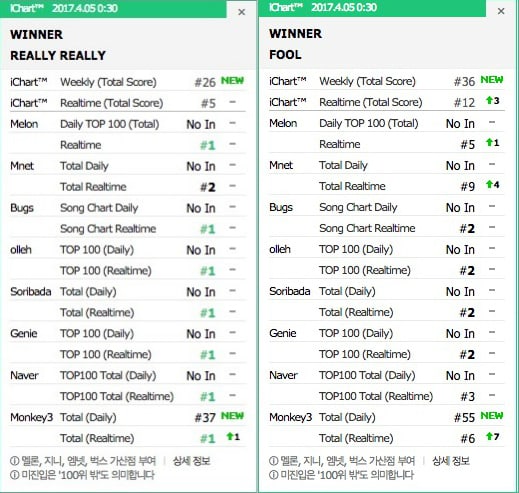