The last two competitors of SBS‘s “K-Pop Star 5,” Ahn Ye Eun and Lee Soo Jung, stood on stage once more on the April 10 broadcast of the show in order to determine the final winner of this season.

Before the final competition began, MC Jun Hyun Moo pointed out, “Since it’s a special day, Yang Hyun Suk has taken his hat off. Is that his real hair?”

Yoo Hee Yeol admired the new hair, saying that he believed Yang Hyun Suk had gotten double-jaw surgery at first. He added, “I thought he was G-Dragon,” teasing his fellow judge. Meanwhile, Park Jin Young joked, “It’s not G-Dragon, but more like hair that was grown in his backyard.”

Shy from all the attention, Yang Hyun Suk commented, “I took my hat off once during season one. Since it’s the first time in five years without it, I’m really embarrassed.”

What do you think about his hairstyle? 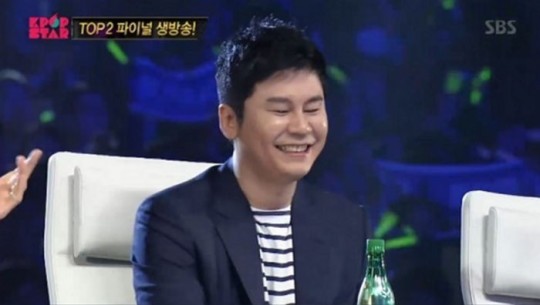