On the April 24 episode of tvN’s “4 Wheeled Restaurant,” the cast enjoyed their first dinner out together after a long day running the food truck in Thailand.

During the dinner, Lee Min Woo thanked Yeo Jin Goo for adapting well to the circumstances, and Hong Suk Chun said, “I’ve been friends with Min Woo for almost 10 years, but I was worried about how Jin Goo would adapt. He adapted very well and had put everything on the line before I knew it.” 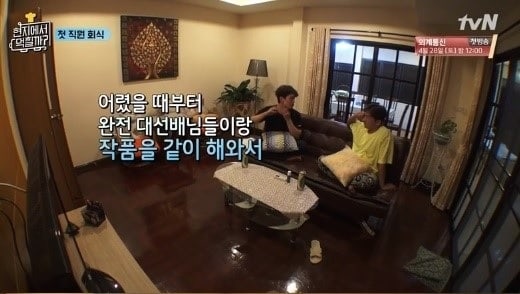 Yeo Jin Goo then shared, “I had worked with such amazing seniors since I was young, so I became the type to close myself off. But then I heard from the people around me that I made them feel hurt.”

He continued, “I don’t mind if I let myself go during a project, but I find it hard to show my true self in my personal life. If the older members had told me, ‘Try this!’ I would not have been able to do it, but since they just did everything with me, I think I was able to do it.”

Lee Min Woo advised him, “You don’t need to fit yourself to other people’s standards. There’s no need to try and change your standards as well.”

Yeo Jin Goo debuted at the age of eight in 2005 and worked as a child actor for many years, playing the younger versions of characters in famous films and shows like “Iljimae” and “Tazza.” He shot to fame as one of the child actors in “The Moon Embracing the Sun” and began transitioning to lead actor roles in the mid-2010s.