It’s no surprise that many were excited to see Park Bo Gum’s support!

During an interview with KBS2’s “Entertainment Weekly,” which aired on April 29, Yeo Jin Goo, Lee Jung Jae, and Kim Moo Yeol sat down to discuss their latest movie together “Warriors of the Dawn.”

Yeo Jin Goo recalled how fellow actor Park Bo Gum had once sent a food truck to the filming site of the movie in order to show his support. “The female staff members were the happiest,” Yeo Jin Goo hilariously added. 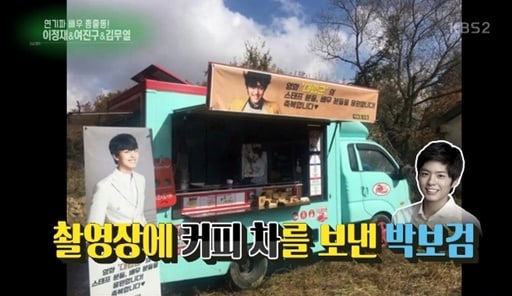 While displaying an amusing hint of jealousy, Kim Moo Yeol chimed in, “It was only something merely sent by Park Bo Gum, but they were still happy with that fact alone.”

“Warriors of the Dawn” explores the story of Prince Kwanghae (Yeo Jin Goo), who leads his people along with To Woo (Lee Jung Jae) to fight against Japanese forces after the rightful king abandons his post and escapes to the Ming Dynasty. It is set to premiere in South Korean theaters at the end of May.

How would you react if you saw something from Park Bo Gum?