Yoo Jae Suk Refuses To Believe His Daughter Looks Like Him

During the November 1 broadcast of the variety show, INFINITE’s Woohyun pointed out that daughters live well if they resemble their fathers.

Yoo Jae Suk replied, “People say she looks like me. I’m not sure. Na Kyung Eun [his wife] says she looks like me. When she said [our daughter] looked like me, I told her, ‘Kyung Eun, don’t say that. We don’t know yet.’ So I’m denying reality. I say we still have to wait and see. I’m reassuring my family to wait and see. I’ll update you as the situation changes.” His fervent denial made the cast burst into laughter.

At the 2018 Korean Popular Culture & Arts Awards, Yoo Jae Suk had said, “Recently, my second child was born. I’d like to take this opportunity to thank everyone who congratulated me. I wasn’t able to sleep because I was filming until late at night. I heard the baby crying in the middle of the night, but I pretended I didn’t and slept. I apologize to Na Kyung Eun. I won’t do that again. My wife, thank you and I love you.”

Yoo Jae Suk recalled the speech, saying, “I had such a guilty conscience that day.” 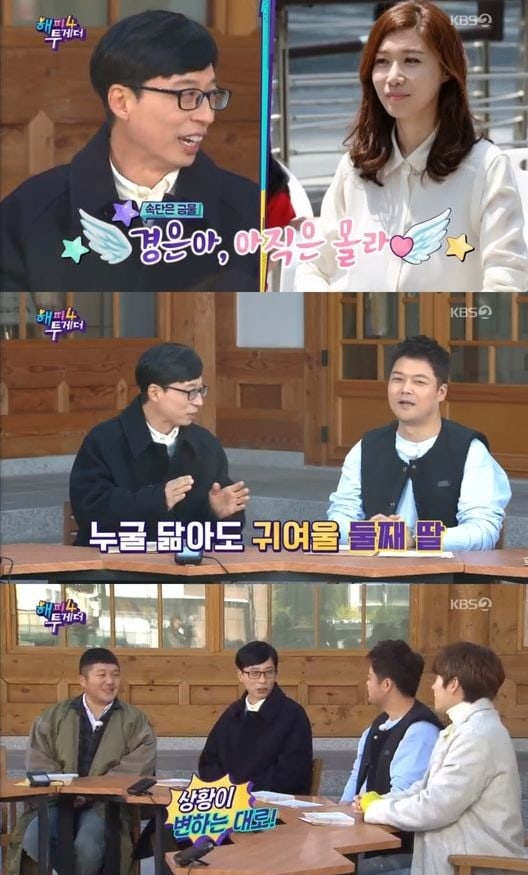