On April 2, MBC’s “Section TV” showed viewers the filming of the final episode of MBC’s “Infinite Challenge” and its wrap party.

After the shooting for the final episode ended, Yoo Jae Suk comforted the crying staff members while Jung Joon Ha couldn’t hold back his tears. Everyone then gathered for a group photo to commemorate the event.

Over 100 people including the members and staff then gathered for a wrap party at a restaurant. MBC President Choi Seung Ho was also in attendance and said, “It was a program that I was really proud of,” and handed the members a commemorative plaque.

The members took the time to walk around the restaurant to express their gratitude to each staff member and signed autographs.

In an interview with the entertainment news show, Jung Joon Ha said, “I think we got here because we were loved for 13 years.”

When asked if he was given advice from the older members, Jo Se Ho answered, “Well… they all take such good care of me, so I feel grateful.”

Park Myung Soo shared some of his favorite nicknames that he earned on the show. “‘Boy Myung Soo’ was the most memorable,” he said. “‘Three Meals Myung Soo’ was okay too.”

Haha commented, “All of the staff and members worked really hard.”

Yoo Jae Suk was asked what he now planned to do every Thursday, the day when the filming of “Infinite Challenge” took place every week.

The MC answered, “It’s my first time resting on Thursdays in 13 years. I don’t have anything planned yet on Thursdays. I’ll rest for the time being. I sincerely hope that we can bring viewers laughter on weekend nights again.” 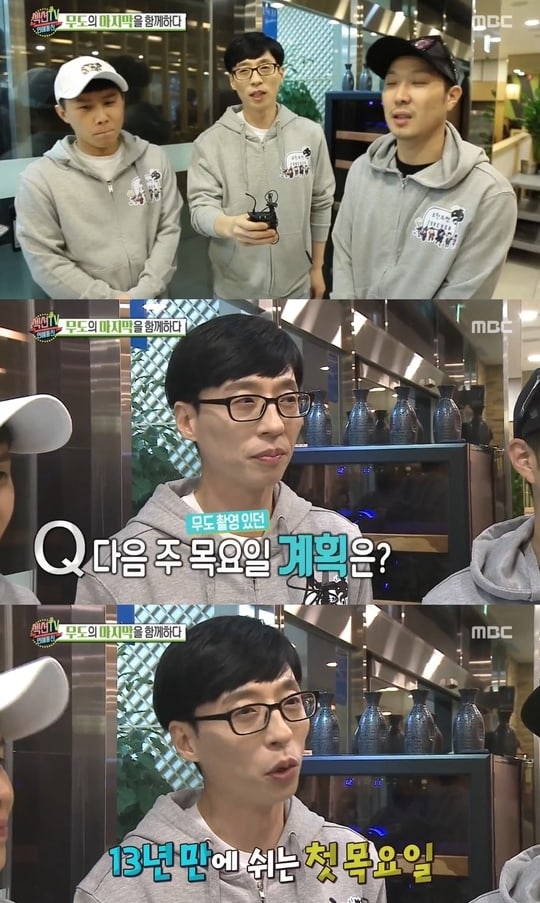 Watch the season one finale of “Infinite Challenge” now!