Yoon Shi Yoon’s character Heo Jun is a brilliant genius with exceptional martial arts skills who gives up everything and completely hides his real self to live his life as a playboy, because he is the child of a concubine. Meanwhile, Yeon Hee, played by Kim Sae Ron, is a princess who becomes a witch due to a curse, and is unable to love anyone due to her frozen heart. She is a mysterious figure, who goes back and forth from being warm and cold.

In this scene, Heo Jun, after losing a bet to his half-brother Heo Ok (played by Jo Dal Hwan), goes into the forested mountains where a cursed witch supposedly resides. There, he comes across Yeon Hee, who lives there, albeit in a shielded area. Yeon Hee, who is unable to leave that area due to her curse, asks Heo Jun to pick a persimmmon off of a nearby tree. Heo Jun becomes the first male figure she talks to besides her older brother, Poong Yeon (played by Kwak Si Yang).

This particular scene was reportedly filmed on March 30 in Gyeongju. Yoon Shi Yoon, who’s become more masculine after his time in the marines, and the innocent-looking Kim Sae Ron are surrounded by a picturesque background that adds to this heart-fluttering moment. 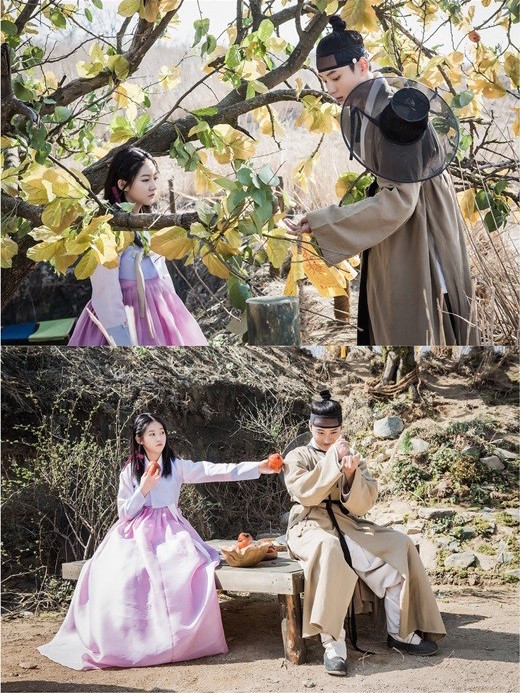 Heo Jun and Yeon Hee exchange tense but shy glances, feeling a sense of kinship with each other despite being guarded. Their gazes and Heo Jun carefully stepping into the guarded area step by step enhances this moment. Many are excited to see how the fate will affect these two characters and their relationship.

According to the staff, while both actors seemed a little nervous during the first day of filming, they were extremely professional and became completely immersed in portraying their characters. Even before the filming began, Yoon Shi Yoon and Kim Sae Ron would discuss their characters with each other while going over the script, giving it their all in order for a more perfect result. They also like to joke around with each other during breaks, creating a lively atmosphere with their laughter. The staff praise the two actors for being able to immediately concentrate on acting once filming begins, even after joking around.

A producer for the drama comments, “Yoon Shi Yoon and Kim Sae Ron have great chemistry that’s magnified by their excellent visuals and synergy. Both of their characters are difficult to act, because not only are they both bright characters who hide their sadness, both also because they will develop a lot throughout the drama. However, our expectations are high because Yoon Shi Yoon and Kim Sae Ron portray their characters well, in a very subtle way. We’re confident that from the visuals to the acting, this drama will have amazing chemistry overall.”

“Mirror of the Witch” is a fantasy historical drama that tells the tale of how a cursed princess turned witch with a frozen heart and hot-blooded youth Heo Jun fall in love, and change each other.

The drama will be directed by Jo Hyun Taek, written by Yang Hyuk Moon, and co-produced by Apollo Pictures, DramaHouse, and Media N Art. It will air on May 13, at 8:30 p.m. KST, following the end of “Ms. Temper and Nam Jung Gi.”