ZE:A‘s Kwanghee confesses his desire to friend top stars in the entertainment industry.

Han Go Eun, Kim Sung Kyung, CNBLUE‘s Jung Yong Hwa, and Kwanghee were guests on the April 11 broadcast of KBS2‘s “Hello Counselor,” where the latter reveal the special friendship they have.

Jung Yong Hwa explains that they became friends because his name was constantly mentioned by Kwanghee on various shows, and jokingly says “We’re close, but I don’t know why we are. Kwanghee said we were close on a different broadcast so…”

Kwanghee truthfully states, “This friend started to gain popularity after debuting, so I kept on talking about him,” making everyone burst out into laughter.

The idol also explains that Jung Yong Hwa was not the only one he became friends through this manner. Lee Joon, and G-Dragon are similar cases. He boldly reveals, “Originally, we didn’t know each other. However, shout it out! It will happen! And, that’s basically how I became friends with them,” expressing that mentioning stars’ names gained him their friendship. 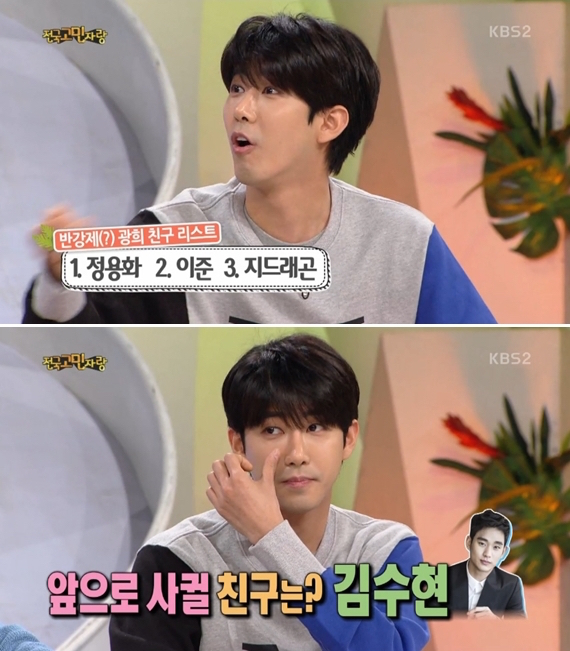 Kwanghee adds that he wants to become friends with both Kim Soo Hyun and Song Joong Ki, referencing the two actors’ immense popularity. He makes the audience laugh when he audaciously says, “Song Joong Ki, Kim Soo Hyun, Lee Min Ho. Soon, I will come here with them. ”